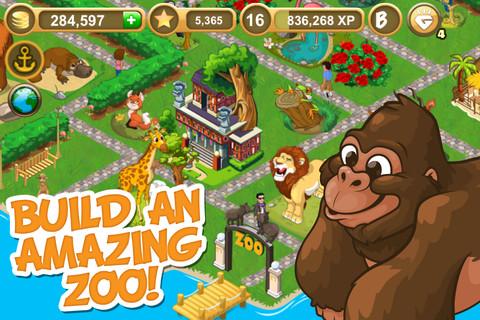 The insanely popular iOS game Tap Zoo just got a sequel in the form of Tap Zoo 2: World Tour, courtesy of Pocket Gems. Allowing players to expand their virtual zoos even further, the game comes with a host of new animals, features, and visual upgrades. That said, the core of the game is really no different than the original, but considering the overbearing popularity of the Tap Zoo name, such is probably not something worth changing anyway.

Like its predecessor, Tap Zoo 2 is a primarily a business simulation app that tasks players with the building of a successful zoo. Simplistically designed, the game steers away from aspects such as resource management and centers itself strictly around earning money and the aesthetic of making a bigger and nicer looking virtual space with each level gained. Visually appealing, the creations possible are great to look at (even if not too elaborate in the animation department), but it is extraordinarily slow to build up.

Though Tap Zoo 2 allows users of the previous game to keep building upon their original virtual spaces, new players will discover that each play sitting is very much in sync with original social game design. This means that they will, at most, have about five minutes of play time until they can’t really do anything else for several hours. The prime contributor to this is the fact that so many items cost a tremendous amount of coin to purchase, so it will take a few days until users really have enough animals to make reasonable income.

To help change things up for the new game, several means of cross-breeding are also available. Players of such apps will be familiar with the concept of breeding two different species, and such is about the same here (if two of an animal is purchased, players can breed more of that animal too). However, the more interesting mechanic is a new three animal mixing feature. Yes, once users reach a certain level, they will unlock the ability to create some truly odd looking fauna, mixing up the head, body, and tails of various, applicable creatures. Suffice to say, this does allow for some truly odd-looking creations, but is an amusing addition all the same.

Along with this mix-and-match concept, Pocket Gems has also incorporated over 40 new animals for players to buy and place in their zoos. That said, many tend to cost the buyable virtual currency of Stars, which come in packs ranging from $0.99 to $19.99. Thankfully, these aren’t needed to enjoy the game, and once players reach a certain level, they will be able to unlock an entirely new type of zoo, the “Safari Zoo.” As the name would suggest, it takes on a very African theme. 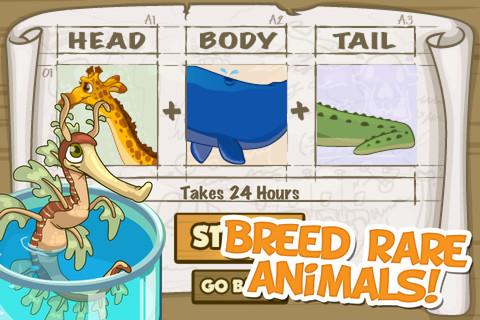 On the social front, Tap Zoo 2 sticks with the familiar as well, allowing users to visit the virtual spaces of friends and “help” their sick animals for some extra rewards on a daily basis. Other than this, they can pick up trash around their space for added coin. The game also allows players to visit the zoos of other random players, but doesn’t appear to allow for much more than seeing what they’ve created.

On the downside of things, Tap Zoo 2 seems like it doesn’t always play nice when it comes to importing the virtual spaces created by players of the original. On top of this, many users are reporting severe bugs such as new features not being available (e.g. the animal mixing), as well as several achievements, some of which are needed to unlock the new Safari Zoo, not completing as they should. Thankfully, updates and fixes have already been employed with more on the way. With any luck, these qualms will be short lived.

Overall, Tap Zoo 2: World Tour is really more an official upgrade to Tap Zoo rather than a true sequel. Other than a few new features, the core play isn’t different at all and the visuals, though higher quality, are still relatively similar. That said, the design is still solid, but the game loses points with its collection of bugs. It’s also worth noting that this is a game for the patient. Progression is very slow-paced, and play is limited to about five minutes or less in each game sitting. If users are okay with this, then Tap Zoo 2: World Tour is certainly worth trying.