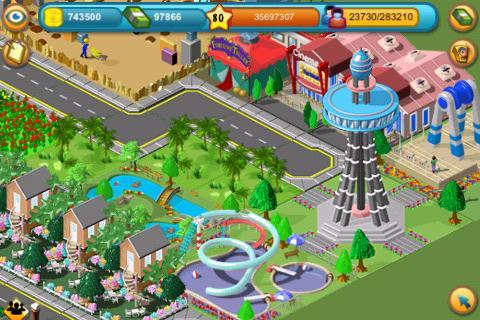 Taking root and constructing your own virtual city is certainly not virgin territory for games – anyone who has had a crack at EA’s SimCity over the years will be more than familiar with the relative highs and lows that come with running a synthetic city.

Somewhat fresher, however, are the urban experiences that seem to have a life of their own, burgeoning in the background almost without our input. BayViewLabs’ Tap Town, following the likes of Social City onto iPhone, is one such title, giving you the keys to a city that manages to exist with or without you.

That doesn’t mean that taking a hands off approach is going to get you all too far, however. Though Tap Town is happy to carry out orders and actions while you’re away – the iPhone handily alerting you when tasks have been completed – you’re still the catalyst for almost everything needed to get your city moving.

The problem is deciding just whether such actions are in any way entertaining. Like many similar titles, the focus of Tap Town is creating and – to an almost cursory degree – managing your own town. Designed to stretch play out for days, if not weeks, you start off with a small hamlet, consisting of little more than a factory, a fast food joint and a few houses.

The factory – and, indeed, any others you go on the build – act as the trigger to everything else you’re able to do in your town, with setting it to work on producing a variety of goods (candy, blank and blank some of the first on offer) earning you the coins needed to expand your town with houses, shops and amenities.

As you might expect, decorating your town with new buildings aplenty encourages the community to grow, the town attracting new residents like bees to honey. It’s this population explosion that essentially acts as a progress tracker – the more people you lure in to setting up residence in your town, the more buildings and services you unlock to construct. 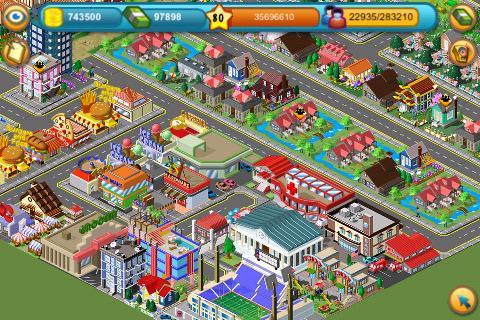 If all this sounds like an especially fast paced urban sprawl, then calm your fears, because nothing but nothing in Tap Town happens quickly. Even the smallest of tasks can take upwards of 20 minutes to complete – some stretching into the following day. As with most social games, Tap Town is not built for fast paced action. However, that doesn’t excuse it for being a bit sparse.

Though things naturally heat up a touch the longer you play (with buildings able to be unlocked ahead of time, as it were, with in-game purchases), it’s hard not to feel that there’s not much to do here. Aside from visiting neighbouring towns and keeping the streets clean (a task that encourages you to keep dipping back into play, with almost every property you place getting dirty and denting any incoming cash the longer you leave them), there’s very little to grasp here. The somewhat sterile approach of Tap Town arguably lacks the character some of its web-based rivals have – if you excuse the phrase – managed to tap into.

As such, Tap Town feels like something of a tentative first step in bringing the kind of casual play gamers enjoy on social networks to iPhone. It doesn’t necessarily do anything wrong, and will perhaps act as an adequate opener for newcomers, but for those with a bit of social gaming experience, Tap Town township feels a little bit deserted.