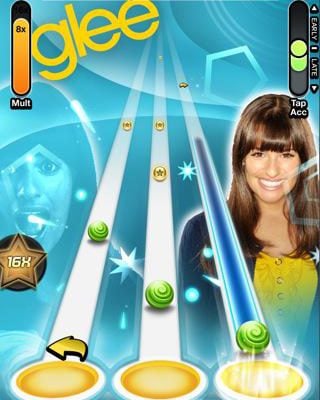 Tap Tap Glee delivers the goods to Gleeks, but fails to impress the TTR faithful

More an expansion pack than a real full-fledged title, Tap Tap Glee is just what fans of the TV show may have been clamoring for – assuming the albums, DVDs and the previous iOS title Glee Karaoke didn’t quench their Glee thirsts. There’s nothing inherently wrong with the game at all, but the timing of its release is a bit suspect. And with other, better titles in the series, Tap Tap Glee is really more for Gleeks than the rest of us.

Like the other Tap Tap titles, you’ll have to tap three round buttons on your screen as balls come flying down three alleyways in time to your favorite Glee tunes. Cutouts of the characters looking happy and smiling flash in the background while you try to replicate their performances rhythmically. The four difficulty levels allow you to choose how hard you want to make your gameplay experience. Higher levels add the challenge of having to tilt your device in the direction of an arrow that flies down the alley along with the balls. The gameplay – at least at lower difficulties – is definitely solid, just like previous Tap Tap games. 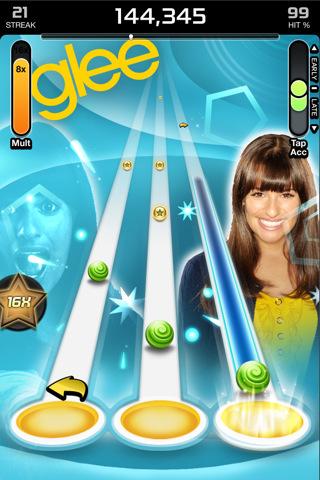 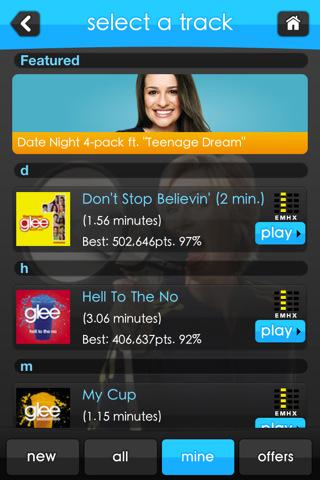 The highest difficulty level, though, is beyond ridiculous. Speaking as someone who has completed some of the hardest Rock Band songs on Expert difficulty with gold stars, Tap Tap Glee is borderline insane. The sheer number of balls flying at you, with tilts, holds and multiple simultaneous taps, feels like a nightmarish Skee-Ball from hell.

You’ll be able to play a few songs that are included with the game, but most of them are going to be premium in-app purchases either through credits you can earn by participating in offers, or straight up cold hard cash. And with only a few seasons of Glee in existence so far, the song selection – especially compared to Tap Tap Revenge 3 – feels really limited.

In fact, Tap Tap Glee feels like a few steps backward. Gone is the multiplayer, the vast song selection, the amazing indie discoveries. In its place, you get some half-baked social aspects – so long as you don’t mind broadcasting your devotion to Glee on Facebook and Twitter. The Gleeks vs. Jocks, for instance, lets you choose which side you would like to join. You’ll also get a Yearbook section, with bios and photos of all the Glee cast.

Otherwise, Tap Tap Glee is a giant ad for the upcoming Glee 3D concert movie (coming August 12th!, which I only know because the game reminded me so many times) and Glee merchandise. Again, there’s nothing wrong with this, particularly coming from a freemium app, but it doesn’t add anything to the franchise as a whole. Still – you have to recognize Tap Tap Glee for what it is.