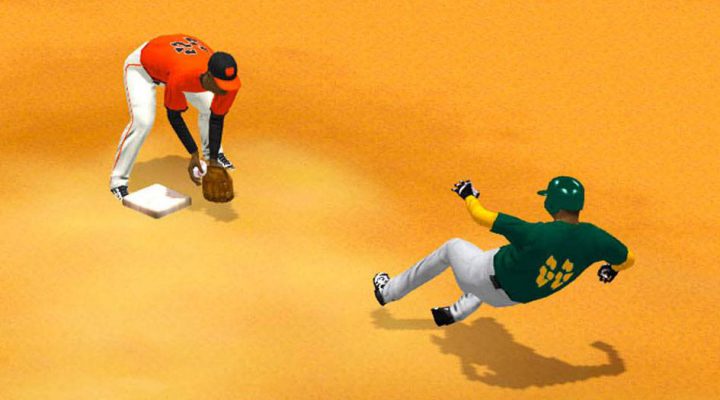 Simple one-touch gameplay is easy for anyone to pick up but still challenging.

Turn-based play by inning is perfect for a baseball game.

Bizarrely stiff animations at times in the field.

No MLB license means real players are out there in generic uniforms.

A long time ago, in an era before mobile games, the sports game gods decreed that all titles should have obvious arcade or simulation leanings. And so it came to pass. Yet the rise of mobile meant that there was a third way, that perhaps sports games could bridge the gap between the two extremes. Tap Sports Baseball is one of those, using simple gameplay but deep stats to straddle the old divide pretty effectively.

First though, a brief warning: if you’re a connoisseur of the fine art of pitching, you might take some offense at the fact that only offense is played here. Part of the compromise that Tap Sports Baseball makes is that while pitchers are still important to your team’s success, you only control the batting and baserunning aspects on the diamond. 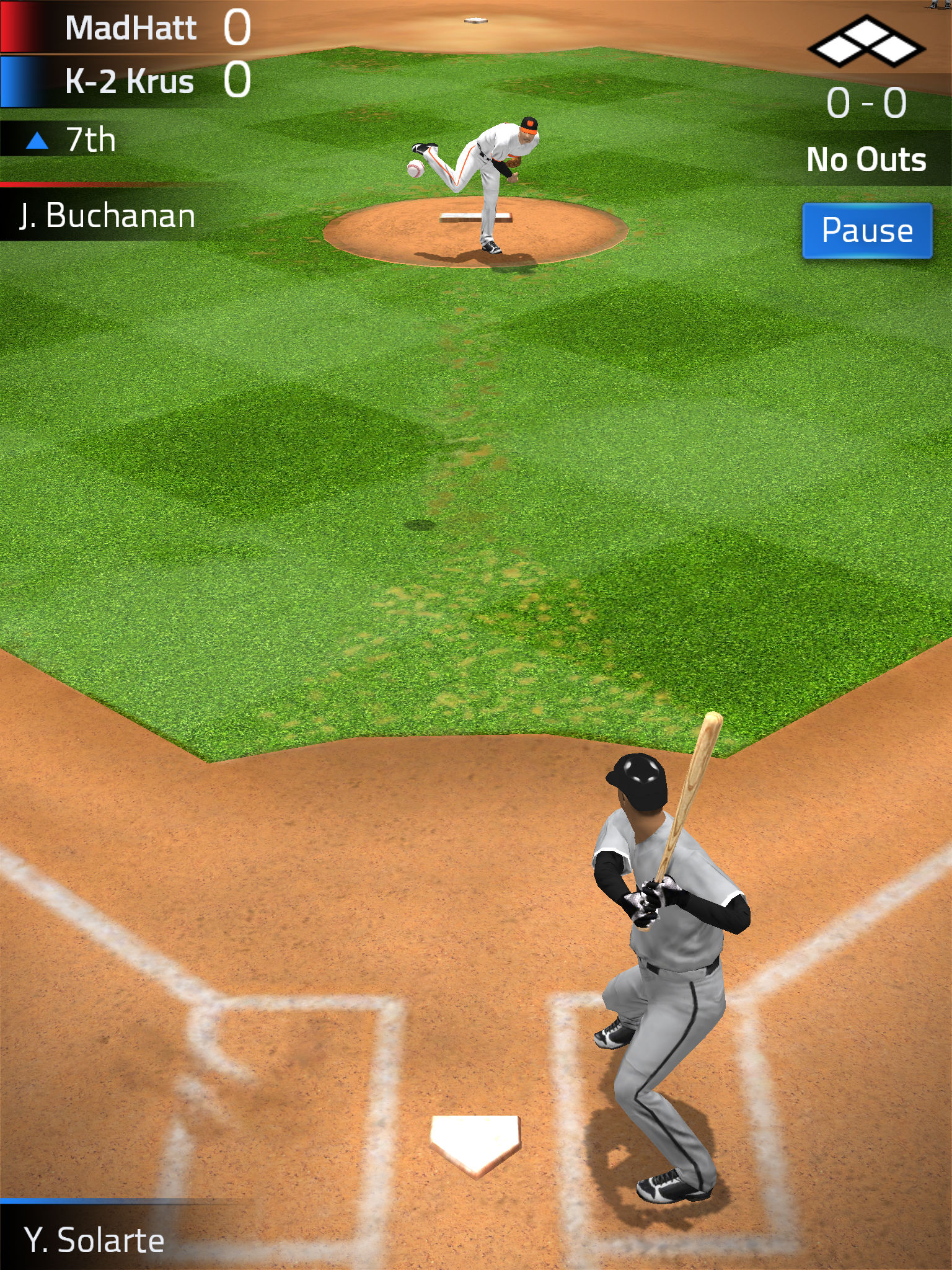 That doesn’t mean it’s not challenging. Even though hitting requires only one tap, it has to be perfectly timed, and opposing hurlers with a number of different pitches and decent stuff can easily tie you in knots. Conversely, when facing pitchers with poor control ratings, it’s much easier to wait on a good pitch.

A surprisingly full set of options is available when the situation is appropriate. With runners on base, you’ll have the choice to bunt or swing away, and players with high speed ratings sometimes allow you to attempt stolen bases. The defensive AI will shift infield and outfield units in the correct situations, so there’s a very realistic feel even though the gameplay is simple.

Several things conspire to knock you out of that feeling of authenticity. The animations of the fielders are incredibly stiff, and it’s almost laughable watching them play balls off the outfield fence, as they simply wait for them to ricochet back to them without moving. There’s some weird stuff in baserunning too, but since none of it affects what’s actually going on in the play, those are more weird curiosities than game-breaking glitches. 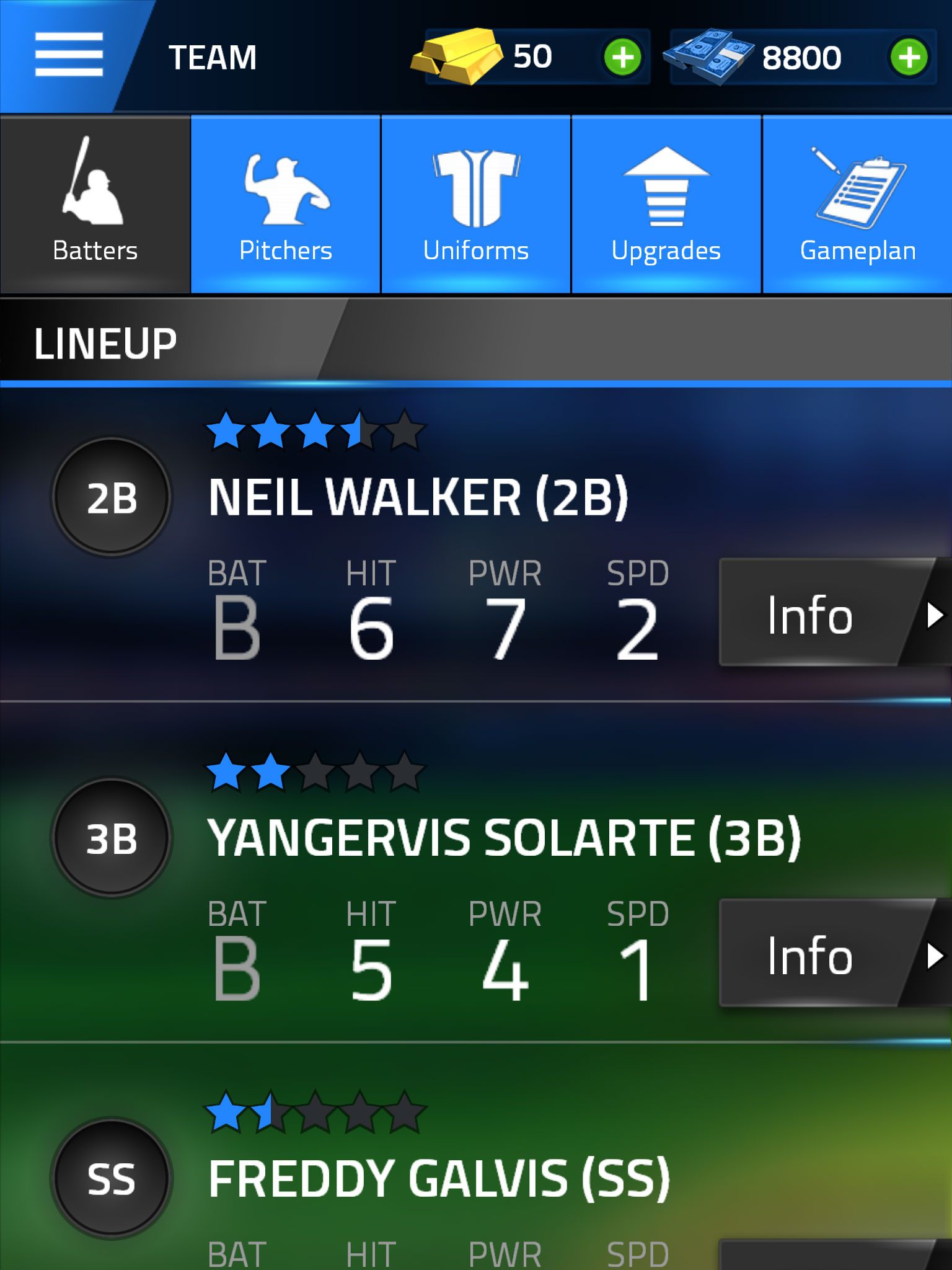 The uniforms are also generic since Tap Sports Baseball doesn’t have a Major League Baseball license. It does have the blessing of the MLBPA, though, so teams are constructed from real big league players. Like so many current sports games, this one uses a card-based system where success on the field gets you currency to buy new draft pick packs containing new players. There’s still some randomness involved, as even a First Round Draft Pick could yield anything between a two-star and five-star player. The game also gives you the option to strengthen specific positions by signing free agents. Premium currency — for a real world price, naturally — can help buy players, unlock new uniforms and buy helpful boosts.

Bill James types will find a pleasantly thorough set of stats to comb through, something you might not be accustomed to seeing attached to gameplay this simple. One unusual quirk is that you can’t do too much with any knowledge you gain by going through them. While in-game strategic decisions like when to pinch hit or pull your pitcher are always there, you can’t even set your own batting order. Instead, you pick the players you want at each position, and the game arranges them in what it determines is the optimal lineup. You can tell the AI to account for right or left-handed pitching though, which is helpful.

Those kinds of decisions were no doubt made to simplify things as much as possible. The only aspect of the game that could use more streamlining is actually starting new games. Since almost every game is an asynchronous duel with another real player, you’ll often have several of them going at once — and there’s the welcome opportunity to jump directly to the 6th inning if you don’t have the patience to play a full nine. There’s a big blue button to start new games and several methods through which you can find an opponent (via Facebook, by email or simply letting the AI find you a random foe), yet I still found the process to be the one thing the tutorials don’t explain all that well.

Be that as it may, I think Glu Mobile has a hit on its hands with Tap Sports Baseball. Maybe staking out the middle ground between arcade simplicity and stats-based realism leaves out baseball fans on the fringes, but for a free mobile take on baseball, everyone in the middle is going to find something to like. Take a swing and see what you think.