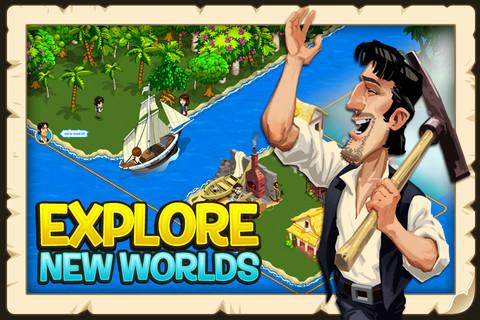 Tap Paradise Cove lets you live in a tropical wonderland, but it’s not cheap.

All of us harbor fantasies about striking out from our lives of concrete and steel in order to settle on a deserted tropical island. Of course, most of us come down from those dreams pretty quickly, because we understand the reality of an isolated, primitive lifestyle. Wild animals would attack, there’d be ceaseless, torrential rain, and it’d simply be a matter of time before the island’s inhabitants went all “Lord of the Flies” on each other.

Here’s a bit of advice: stay home in your well-lit house and let the explorers in Tap Paradise Cove live out that tropical fantasy for you. Just be prepared to dish out real-world money if you want to play for an extended period of time (US dollars only. Sorry, no coconuts or papayas).

Tap Paradise Cove is a city-building game that has a good deal of land-clearing and exploration laced in it. You begin life on an overgrown island that needs to be cleared away (because to hell with Nature). As you chop down trees, you slowly build up the cleared land with dwellings for new residents, as well as businesses for merchants and tradespeople. As you build, you reveal temples and other landmarks that can be explored. You can also manage a fleet of ships to search for treasure and new potential neighbors.

It’s all right for freemium games to hold back some content in hopes that the player will cough something up. It’s a rough, crowded market, and developers have to make their cut. But developers should also be careful about how much they ask players to spend, and on what. For instance, performing almost every action in Tap Paradise Cove requires a wait of at least a couple of hours. Want to hurry up construction? Spend some rubies. Spend a lot of rubies. Want to buy some more land? Gotta wait a couple of hours for the deal to go through. Got a problem with that? Buy your way to the front of the queue. Want to clear your land of trees? You can chop down a few, but then you have to rest until your “energy” refills. Of course, you can buy a full recharge for just nine rubies. Etc, etc. 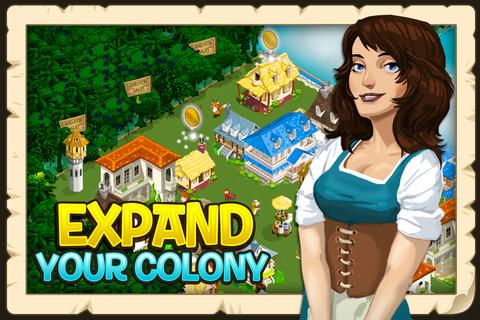 That’s not even counting how many in-game items you’re expected to pay cold hard cash for. Why is a simple flagstone road a premium item? In many town-building games, it costs almost nothing to lay down paths.

Playing through Tap Paradise Cove is slow-going because of its attempts to pressure the player into buying rubies, and as a consequence, you end up developing a pretty cramped town in what little space you manage to clear. This wouldn’t be a big problem, except moving around buildings can be a frustrating business. When you tap on a structure, you’ll end up selecting its neighbor more often than not. This is a bit baffling, as Tap Paradise Cove doesn’t let you put structures very close together in the first place. If you’re the kind of person who likes to arrange your houses neatly when you play a city-building game, prepare to go orangutan.

Tap Paradise Cove is a decent city-building social game, and it has its moments of reward. Unfortunately, it seems to hold back unless you’re willing to offer up handfuls of cash. Given the availability of similar games that aren’t nearly as pushy about microtransactions, you may as well chalk this one up as another broken tropical dream.