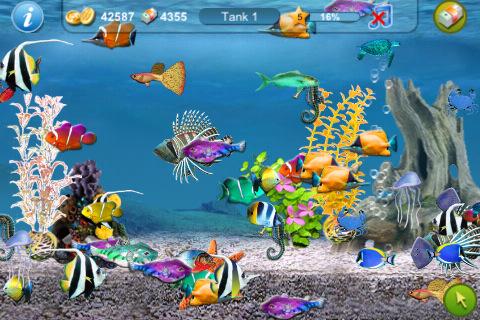 Just like the original Tap Fish, Tap Fish 2 puts you in control of your very own aquarium. Given plenty of tools, fish eggs, food and more, you can pretty much create and manage this aquarium however you wish. And that’s the problem with Tap Fish 2 – there isn’t much to be excited for if you’ve already spent several hours in the first game.

Being that this is being marketed as a sequel and not an expansion, I certainly expected more out of it. Sure, there are a few new types of decorations and fish, but I would reserve those types of new upgrades for a simple app update, not a sequel. Is it too much to ask for new gameplay features or major upgrades in a full blown sequel?

The interface in Tap Fish 2 hasn’t even been touched, with the same low-resolution graphics plaguing an otherwise atmospheric experience, along with some cramped touch issues where I would occasionally hit the wrong button accidentally.

Being able to create and play with fish in your own aquarium can be a whole lot of fun when done right, and a whole lot of boring when done wrong. Tap Fish 2 leans toward the boring side simply because there isn’t much to do. The only real gameplay involves buying fish, feeding them, and cleaning your tank.

There are a few social features where you can visit your Facebook friend’s tanks to earn a few coin bonuses and view their scenery. You can even buy the scenery found in their tanks on the spot if you feel it’s something you must have for your own fishy paradise.

Just like in the first game, you can have multiple tanks to manage with different kinds of fish in each. If you find yourself bored with one tank, you can easily switch over to the other to take care of them or clean the tank if necessary. The extra amount of gameplay this feature offers is minimal however, and you will likely find yourself bored again within seconds. 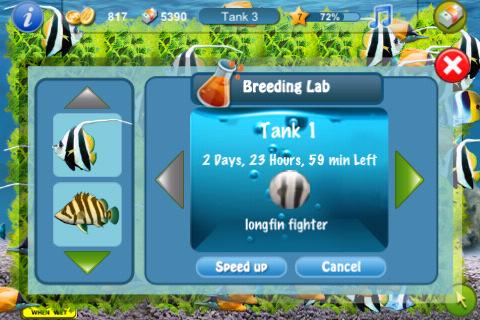 Without much added for existing players of the original Tap Fish, and issues that plague the graphics and interface, Tap Fish 2 really does touch the bottom of the barrel when it comes to social games on the iPhone. If there’s ever a Tap Fish 3, I’d hope the developers would learn that a sequel should be much more than a simple update to an existing game, as players have come to expect more. After all, if Zynga (or any other studio for that matter) decided to release a Farmville 2, but all it included was a few new items and animals, wouldn’t you be disappointed?

If you were absolutely dying for more Tap Fish content and don’t mind not being able to carry over the progress you made in the original game, then maybe you should give Tap Fish 2 a try. For everyone else, stay far away from this shallow (no pun intended) and ugly social game.