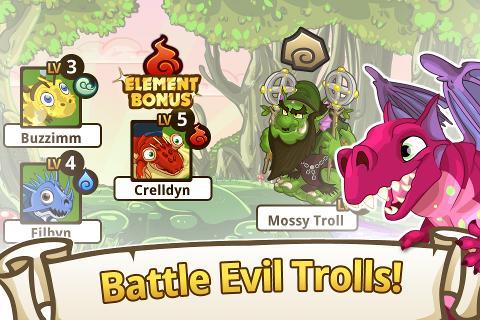 Tap Dragon Park certainly gets you through the gates… but does it keep you there?

Tap Dragon Park could be described as a Pokemon clone, but looking at the game this way shortchanges it some. The creatures you raise are the guardians of your kingdom, which expand and flesh out as you earn more cash. You don’t need to go out and battle dragons to get new ones, though; instead, you purchase dragon eggs from the game’s shop. Hatching a dragon egg gives you a baby to work with, and you can slowly level it up into a more mature beast by having it train with a wizard. If anything, this is a virtual pet game that seems like How to Train Your Dragon

The dragons have appealing designs, and sometimes surprisingly different attributes. You begin only able to afford relatively weak breeds that max out at level two. As you gain gold and defeat trolls, though, you can begin raising dragons with higher max levels. Each dragon has an elemental attribute that gives it certain strengths and weaknesses in combat. Tap Dragon Park uses an extremely simple elemental system where water beats fire, fire beats earth, and earth beats water. With only three elements to manage, you don’t get bogged down in the the particularities of a damage roulette that often plagues more complicated monster training games. Ultimately, I found the simplicity freeing, but it’s really down to what type of gamer you are.

Battles do have some unusual properties, though. Each dragon has its level as an attribute, as does the troll you fight. The outcome of a battle is determined by weighing the elemental and level bonuses. If your dragon has both, you win the fight. You also tend to win if you get only the elemental bonus though. Topping it off, there’s a weird third factor called battle bonus that appears at random, and adds one point to the odds for either side. In practice, the battle bonus can make it feel like you sometimes win or lose battles at random, since it’s so easy to tie a troll. In general, there’s lots of fun to be had, but I found myself exasperated in moments where difficult spiked uncontrollably.

Training dragon and all other shenanigans follow the freemium rules of thumb; that is to say, it all happens on a timer. Training a dragon usually takes around 30 minutes, while something more elaborate like expanding your kingdom can take three hours. In practice, this means that a play session in Tap Dragon Park tends to be about five to ten minutes of battling and setting up timed events. After that, you are best off going to do something else for a while. You can do some other things like clean out trash that spawns in your kingdom, but unfortunately there’s nothing substantial enough to keep you truly occupied between sessions of real play. I would have loved to see the ability to engage in some sort of constant battling to give a real sense of play. 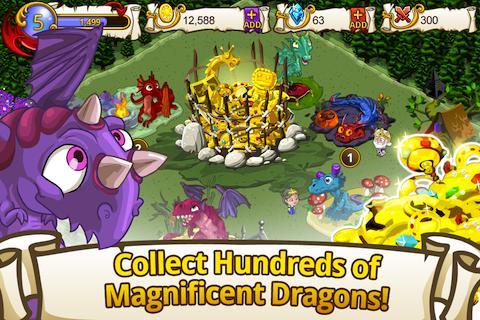 Tap Dragon Park is a very good mobile monster trainer, offering bite-sized bits of gameplay with which you can easily engage while on a short ride or while standing in a long line. While it can be frustrating that there’s relatively little to do at each time, this aspect of the game also makes it very easy on a phone’s battery life. Kids will probably find the game’s colorful visuals and fantastical themes very appealing; if you’re looking to sit down and dig your claws in, however, better set to the skies for another app.