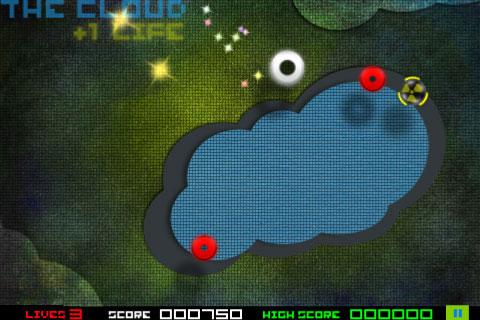 Usually it’s easy to classify a game, be it a HOG, adventure, puzzler or what have you. Tap Disc is a game that’s tough to call. It’s part reflex, part puzzle, part rhythm action. But thankfully, it’s also entirely fun, and one of the most original experiences on the iPhone right now.

Explaining the gameplay of Tap Disc isn’t easy. In fact, the developers realized this and made three distinct tutorials (short, long and interactive) just to make sure you understand it. The easiest way to explain it quickly it that your goal is to capture and clear floating discs by capturing them inside a like-colored ring you create by tapping before your rings change color too many times and get destroyed. Enemy discs float around as well, trying to speed up the destruction process.

However, in practice it’s not that simple. When you tap the screen, a ring appears that cycles through three colors: white, orange and red. You have to time and place the tap in such a way that the ring changes to the color of the disc you’re trying to capture. If you fail, the disc ricochets, continuing its floating around the screen. Discs usually appear as white, but if they collide with other discs, they change colors in the same order as your capture ring – orange, then red. If two red discs collide (or an enemy disc collides with a red disc) you lose a life. Lose all lives and it’s game over.

Survival in Tap Disc is all about endurance. Just keep capturing discs until the timer runs down. If you make it that far, a special 15-second timer begins, letting you rack up extra points and counting down the last part of a stage before progressing to the new one.

There is also a vast array of power-ups, bonuses, methods of collecting extra lives and other details that would take multiple paragraphs to explain. It’s kind of the big double-edged sword of Tap Disc. On one hand, there is a wealth of depth to the gameplay. On the other hand, it can be quite overwhelming. Know that if you stick with it, Tap Disc‘s quirks become apparent through game play, and the aforementioned tutorials are very helpful.

Tap Disc‘s gameplay is wrapped in a very funky package. Each of the game’s three difficulty levels feature a unique set of cool backgrounds and images, coupled with a cool beat. As most good games do, if the sound isn’t to your liking, the option is there to use your own.

But like all games, the play’s the thing and Tap Disc has it in spades. The combination of timing and placing your capture ring, coupled with keeping track of a busy screen – ever vigilant for those red rings – can be a sensory overload. If you’re not careful it’s very easy to let things get out of control on the screen in the later levels, particularly with a few enemy discs on screen. However, Tap Disc has that rarest of qualities, the one where if you just relax and “zen out” with the game, the more success you’re likely to have with it.

Not since Tron: Deadly Discs have flying Frisbees of death and destruction been so fun. Unless you’re absolutely against twitch gaming, or afraid to invest a little time into learning a deep system, Tap Disc is a great addition to any iPhone gamer’s library.