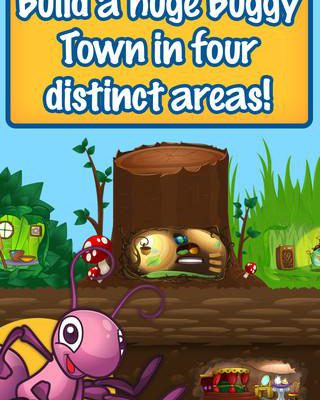 Pocket Gems gets down in the dirt for Tap Buggies

Pocket Gems, the mobile games developer behind popular titles such as Tap Pet Hotel and Tap Zoo, is adding a new 2D app to its repertoire: Tap Buggies. As the name would suggest, it’s centric to the insect world, and in typical Pocket Gems fashion consists of creatures wielding big watery eyes. Oh yeah, and it also goes into that whole business simulation concept again. This time around, however, it’s been shrunken down to a bug’s level.

Essentially, the whole premise of Tap Buggies is to construct a home for a variety of overly cute insects in a manner not dissimilar to Tap Pet Hotel. The big difference here — aside from the bugs — is that the homes are more natural, consisting of building within a single tree stump and its surrounding areas. It all has a style that feels very much inspired by films such as A Bug’s Life. As far as the game play itself goes, there is nothing too terribly difficult to learn. Players of past Pocket Gems titles should have no problem catching on. 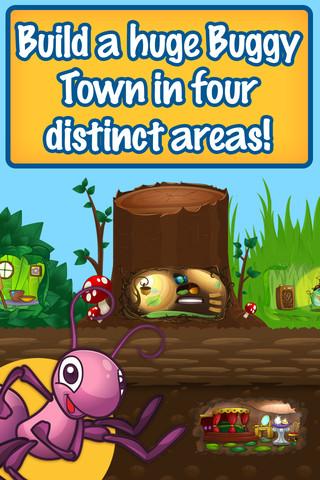 The idea is to make a successful bug economy, and to do that, revenue is needed. Players construct various bug-specific rooms within their virtual space that will then house the associated character (ladybugs, ants, beetles, etc.). Each room will require three stages of construction, with coin being charged at each one and the final stage taking often up to several hours to complete. As has come to be expected of freemium games, such can be expedited via the use of the purchasable virtual currency – in this case, flowers. Once rooms are constructed, the inhabitants will pay periodic income and it’s rinse and repeat from there.

Along with building out homes for the different characters to sleep, players can also make the effort to keep them happy by building out entertainment venues or raising bug children. Neither is difficult to accomplish, with the former (ranging from kitchens to showrooms) being built in the same manner that bug rooms are made. As for kids, these are raised by hiring bug staff workers to raise them over a period of time. Once such things are created, they will satisfy the needs of the various tenants and earn bonus rewards accordingly.

The other rewards of the game come from a standard quest system too, but consist primarily of cash. In some cases quests are very arbitrary, such as collecting money a set number of times, while others are more specific (e.g. players have to prepare for the arrival of the king bug and must build specific rooms for their space). Either way, it all provides a nice catalyst for learning, but is nothing out of the ordinary. 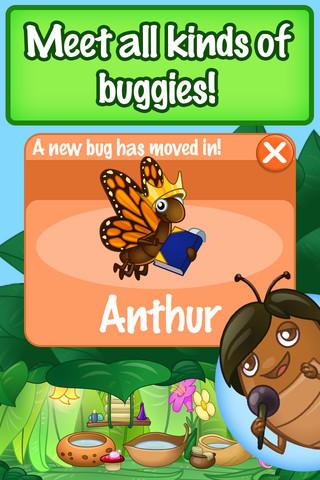 On the downside of things, the placement of rooms is abhorrently annoying. In order to scroll around one’s virtual space normally, players tap and swipe in the opposite direction to pan the camera. For whatever odd reason or another, this direction is changed when placing a room. Not only is the camera moved when a swipe is made, but it also doesn’t stop when one stops their finger. What this equates to is the camera bouncing all over, every which way, in an exceedingly annoying manner.

There isn’t much of a social front either, other than visiting the virtual spaces of other random users and simply seeing what they have done.

Tap Buggies isn’t a bad game, but it’s nothing too exciting or groundbreaking. For what it is, it’s decent, but it plays it conservatively in the innovation department. The change of aesthetic is nice, and many Pocket Gems fans will likely enjoy it. It’s also nice that the area within which players can build is a bit more dynamic than strictly a vertically oriented hotel. It’s kind of interesting to build in a trunk, underground, and in tall grass. All that considered, Tap Buggies is an average app that will likely be enjoyed by the already existing fans of the developer.