Patton would be proud

World of Tanks is, to put it bluntly, a phenomenon. While offering a different style of gameplay, I wouldn’t hesitate to call World of Tanks as popular as other free-to-play multiplayer offerings like League of Legends or DOTA 2. And like those games, it was only a matter of time until somebody decided to take this winning formula mobile.

The “somebody” in this case isn’t World of Tanks creators Wargaming.net (whose own mobile version, World of Tanks Blitz, was announced back in March), but Game Insight – a top developer of free-to-play games for the casual mobile market.

2013 has seen something of a change in focus for Game Insight. The company that was built on the success of games like Mystery Manor and The Tribez has been voraciously pursuing the midcore sector with releases like Dragon Eternity and Starborn Wanderers. Tank Domination isn’t just their latest foray into market; it’s their biggest and boldest gamble yet.

And yes, it’s one that pays off.

Like the aforementioned World of Tanks, Tank Domination is a game of team-based tank warfare. In this case it’s a 10v10 online deathmatch where the goal is to take the other team’s base or wipe every opponent out before doing so. Before I go any further, I’d like to slow down and let that sink in for a minute. 10v10. That’s 20 players playing simultaneously on the iPad. And for the most part, it works without a hitch.

The controls take a little getting used to, but after a few battles they’ll feel like second nature. An on-screen left thumbstick will control the movement of your tank while a right thumbstick will control your turret. Controlling these separately feels intuitive in similar games that use a mouse and keyboard, but for some reason it takes a little experience to really feel comfortable with here. Much of the fun in games like this is realizing that your turret might not move as fast as your eyes, so you’ll want to have your head on a swivel well in advance of needing to aim. Because of this, your initial experience might be “the aiming in this game is @#$%!” Push through it. You’ll adjust, and you’ll be thankful that you did. 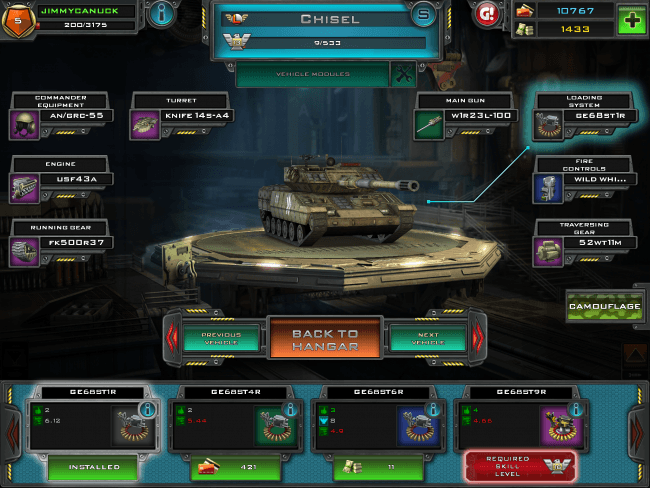 Every aspect of your tank – including turret speed – can be modified by upgrading your parts. New parts will unlock for purchase as you level up your tank, with special parts (and speedy levelling) available through premium currency. Eventually your tank will level out, and you’ll want to buy another. Soon you’ll be switching back and forth between a whole stable of armored asskickers.

Having multiple vehicles – especially early on – is important. Tank Domination is a “when you’re dead, you’re dead” game, and your tanks will be unavailable to use until the match they were participating in is over. If you have just one tank, you won’t be able to jump into a fresh battle right away.

Avoiding death, though, is the real goal of Tank Domination. The longer you survive, the more lambs you can lead to the slaughter. This means learning your maps, learning vehicle weaknesses, and using the terrain to your advantage. If you’re under attack and there’s a hill, use it to disappear from your assailant’s field of view. Not doing much damage to the opponent for some reason? Aim for the back of their tank instead. And above all else, keep moving. You’re no good to my team if you’re dead.

The maps themselves are varied in size and layout, and are incredibly well designed. I’ve yet to come across a map where I said “ugh, not this one again.” The more I play each map, the better I feel I’m getting at the game. That alone deserves an award in terms of map design. 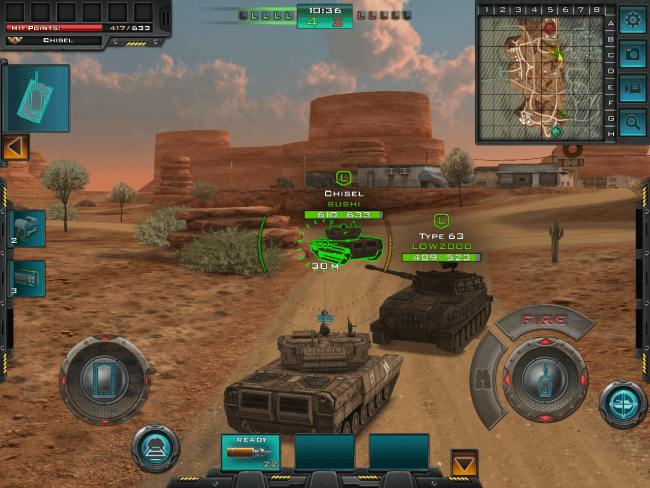 There are a few weird hiccups in the system that you might encounter, but they’re the sort of thing that Game Insight should be able to iron out quickly. In one instance I was greeted with the words “LStoreOverload” instead of “TO BATTLE!” because my storage (or “depot” in Tank Domination speak) had too many items in it. In another instance, there was a period where every time I tried to jump into a battle I was given an error and sent back to the main menu (or “hanger” – I love a bit of military jargon).

Little niggles like this are easy to overlook though; both because the game is still in its first week and because everything else is so top shelf.

With Tank Domination, Game Insight set its sights on a seemingly impossible challenge. Not only did they want to take a successful PC formula mobile, they wanted to do it in a way that wouldn’t disappoint. What they’ve done with Tank Domination is an incredible accomplishment, and assuming the game is as successful as its quality warrants, I’d be very excited to see what crazy impossible project they’re looking to tackle next.