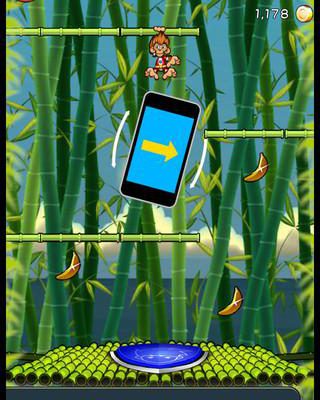 Monkey around with Tango Chase

Tango can’t catch a break. Finally, the poor guy – err… monkey – is relaxing in the sun with his simian soul mate. Then BAM! He’s falling prey to the oldest trick in the book. “Surprise damsel capture by a super-villain with only a vague hint of motivation.” Like any good ape with a cape, Tango sets off to rescue his true love. Luckily for us, the game that results isn’t half bad.

Based on a mini-game from Herotainment’s online sim, Herotopia, Tango Chase is a physics micro-platformer in a sea of them. In order to stand out, however, it goes all in with its interface, combining tilt and swipe controls. Each level is a vertical drop through perils like spikes, spiders, and shockers (oh my!); it’s your job to use the “monkey bars” to land safely at the bottom, collecting gems and bananas along the way. 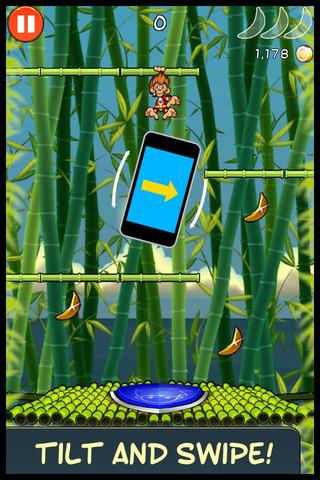 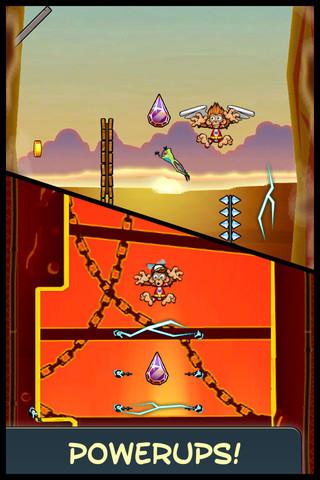 Much to its credit, Herotainment turns what could have been an awkward gimmick, “tilt and swipe to play!”, into an often-engaging experience with clever level design and lots of variety. What starts off as a simple bar-to-bar descent very quickly becomes a minefield full of crumbling bamboo, stalking arachnid, tiki cannons, moving spikes, and more.

By stacking these dangers, Tango Chase trains you to integrate timing, quick reflexes, and forethought into your play style as you go. And with a host of power-ups like the propeller hat and lightning speed boost, the game knows just when to disrupt its own patterns. At its best, the game challenges you to nail that perfect balance between planning and spontaneity, and makes you feel like a master when you do.

Unfortunately, Tango Chase isn’t always at its best. On the programming side of things, the game’s hit detection is hyper-sensitive, making its demands for precision all the more frustrating. Floating down towards the goal, I was often hit by a wayward bullet or shock despite seeming to be well clear of either. Even worse, when I was in a sweet spot chasing the screen to catch a banana or grab bamboo, even the slightest drop below visibility meant a retry (with slow load times to boot). With so little leeway, I found myself in the worst situation a player can be in: knowing exactly how to beat something, if it weren’t for the game getting in the way. 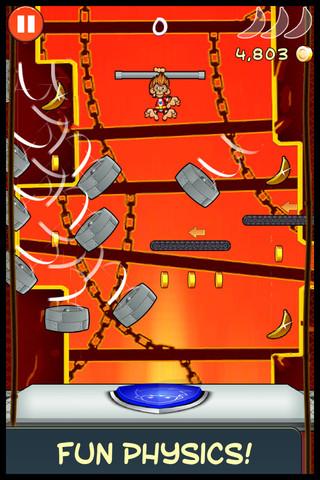 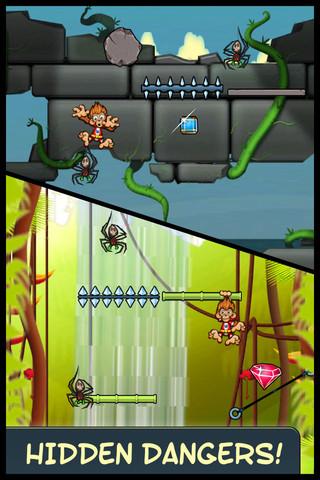 If you can stand some inevitable frustration, however, the “hijinx” quotient is still high enough for Tango Chase to be worth playing. Underscored by feverishly catchy jungle beats (“Are you dancing while you play?” my girlfriend would ask), the game maintains a ceaselessly cheery aura that makes staying mad difficult. And while it might just be my conspiracy theory, each “glitchy” level felt accompanied by two or three comparatively easy ones, as if Herotainment knew where the trouble spots in design were.

For the low low price of absolutely free, I’d recommend at least taking Tango Chase for a swing. In a saturated marketplace full of platformers asking you to earn three stars/gems/coins/stickers, fans of the genre could do worse than to monkey around with this one. Now if you’ll excuse me, I have to attend a tribunal for crimes of punning against humanity.