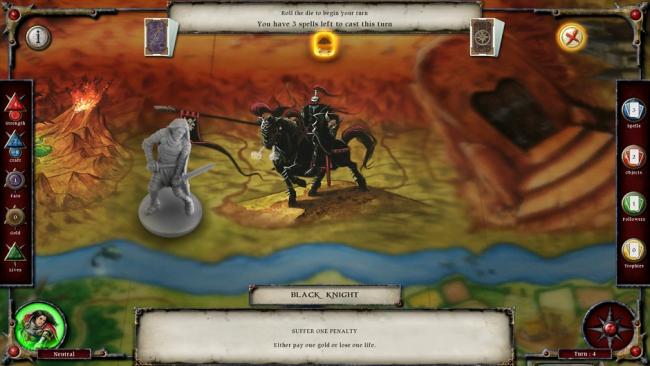 This new twist on an old classic remains Talismanic

Talisman is the board game that will not die. First released by Games Workshop in 1983, it divides the board gaming community. One side see it as a long, dull, overly-random poster child for the worst excesses of gaming. The other is a joyful romp through a compelling and endlessly variable fantasy narrative. Now you can pick which side you’re on with Talisman: Prologue.

The game presents you with a choice of ten characters from the original, each of whom is challenged to fulfil five quests. They do this by rolling a dice and moving round the board, encountering either specific locations like a village where you can buy equipment or visit the local mystic, or generic spaces where you draw your encounter from a colossal deck. From this can spring magic items, strangers, events, monsters and much more. You fight by rolling a die for each combatant and adding an ability score, with the highest total taking the glory.

One of Talisman’s strength is its enormous variety. In addition to scripted encounters straight from the rich vein of myth such as the Black Knight and the Grim Reaper himself, almost anything imaginable in classic high fantasy is hidden somewhere in one of the game’s many stacks of cards.

Traditionally the game is played with multiple participants and is a race to the center of the board. One of the common criticisms of the game is that the interaction between players makes play overlong, and sometimes dull. This new Prologue version solves that by making the game solitaire and having characters pursue quests to win. You can lose by running out of life, and victories are rated by how quickly you complete your goals, giving replay value to each one. This is a stupendously good idea, because it immediately bypasses an issue with the original design and adds to the sense of story, one of its strengths. The tasks on offer make good use of all the diversity in the game to stay fresh and interesting as you play through them.

However it can’t do much about the other problem with basic Talisman, which is the dice-based movement system. It’s very common in the original to want to reach a particular square, and if anything the quests make it even more frequent in Prologue. But because your movement is entirely at the whim of fate, trying to get where you want to be is often an exercise in frustration as you shoot back and forth over the square you need, never rolling exactly what’s required.

Another good thing this version has kept is the evocative art of the current fourth edition of the game, and it adds small flourishes like a good video game conversion should. Illustrations of trees and mountains pop out of the board with a little touch of added depth. The plastic miniatures used as playing pieces are reproduced in astonishing clarity and detail. There are some sound effects and stirring music to accompany your adventures, and combat is suitably embellished with the din of battle.

There’s a fair amount to track in this game, and the interface does a reasonable job of allowing you to keep on top of it. It does sometimes feel like there’s a click or two more than there really should be as you navigate around the icons to play, but those concerned that all this variety will lead to complexity need not worry. Talisman is not especially difficult to learn, and what barriers there might be to understanding are blown down by the excellent tutorial, which leverages the quest set-up to spread itself widely throughout the game, never leaving you feeling overwhelmed with rules.

The idea behind Talisman: Prologue was, as the name suggests, to introduce the board game to the wider world and act as a trailer for the main event: the upcoming release of the full multi-player version. But if anything, the quest-based gameplay of this version actually adds to the experience rather than leaving it feeling truncated. The need to travel to specific spots on the board when movement is almost entirely random is a too frequent irritation, but it’s hard to see how that could have been avoided. This is a great implementation of a genuine classic.