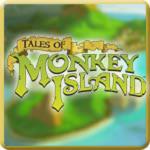 After four chapters, the moment we’ve all been waiting for has finally arrived. The fifth and final chapter in the Tales of Monkey Island series wraps up the epic story arc that’s been building over the past few months, but not necessarily in the most satisfying manner. It’s not that this installment is sub par, but after all of the build-up leading up to this finale, the actual ending is a touch disappointing.

Things kick off with our newly deceased hero Guybrush Threepwood trapped in the afterlife, buried alive, and desperate to find a way to get back to the land of the living so he can save his wife Elaine and stop the evil LeChuck once and for all. Unfortunately, this is much easier said than done. The intro sequence to this latest episode is much slower paced than previous chapters, with little action to get things going. But the measured pace actually fits the gloomy afterlife setting quite well and does a good job of setting the tone for the last chapter.

Eventually Guybrush is able to make his way out of the afterlife but his incorporeal body makes actually doing anything quite difficult. It’s tough to pick up a sword and fight when your ghostly hand passes right through it. Eventually, you’ll be switching back and forth between the spirit Guybrush and zombie Guybrush, travelling between the lands of both the dead and the living as you attempt to thwart LeChuck’s plans.

And this brings us to one of the biggest problems with Tales of Monkey Island: Chapter 5 – Rise of the Pirate God: backtracking. You will be constantly wandering through the same areas over and over again, manipulating both realms as you attempt to solve the various puzzles in the game. And this constant backtracking quickly becomes both frustrating and tiresome, as you’re forced to walk back and forth between areas much too often.

The new setting and tone does add a lot to the experience visually, though. The dark, saturated color scheme stands in stark contrast to the vibrant, colorful world presented in the first four chapters. And this extends to the land of the living, where LeChuck’s voodoo magic has left the world a dark and ugly place. It even effects Guybrush himself, who’s translucent body will reveal what’s underneath when viewed at the right angle. For a series that has looked exactly the same for the past four episodes, the subtle change in visual style is very refreshing.

Unsurprisingly, Rise of the Pirate God‘s more somber tone is reflected in the dialog and story, though the series’ trademark sense of humor is still on full display. In fact, because of this new direction, many of the jokes actually have a stronger impact than they would if the tone was more lighthearted, as in the past.

Far and away the most disappointing aspect of the series finale is the ending. The final battle between Guybrush and LeChuck is an exercise in frustration, with time-based puzzles that don’t give you enough time to figure out what to do before being cut short. Like the constant backtracking, this can become incredibly frustrating and annoying as you’re constantly going through the same sequences over and over in an attempt to figure out just what to do. And if you happened to miss a step, well, that just means you’ll have to do it all over again.

Thankfully the plot wraps itself up quite nicely after the annoying final battle is complete, and even ends on a delicious cliffhanger like all of the previous episodes. This all but confirms that we’ll be seeing the familiar faces of Guybrush, Elaine, LeChuck, and Morgan again in a second season. And, despite the few bumps encountered over the course of the five games, more Monkey Island is always a good thing.

The Otherside: Realm of Eons Review