Tales From The Borderlands Episode 3 Review: Catch a Ride 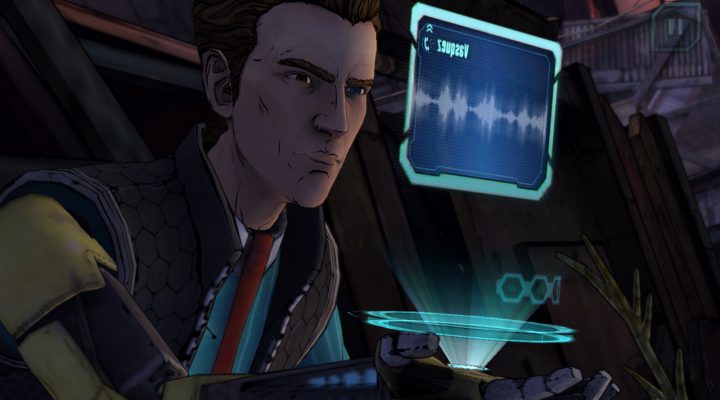 Really start to enjoy the characters in this episode.

Such long waits in between releases blurr previous plot points.

The story of Rhys, Fiona, Sasha, Vaughn, and, my personal favorite, Loader Bot, continues in another action packed episode that takes the gang to some surprisingly colorful locations this time around.

The excellent writing as well as a few cameos by Borderlands alumni characters kept me well entertained throughout the entire episode. From the snappy one-liners, to some fun jabs at the game overall (Telltale’s signature “XYZ will remember that” notices are even poked fun at), Episode 3 had me chuckling to myself the entire way through the game.

Really, the only issue I have with Tales From The Borderlands is that the wait between episodes is ridiculously long. Even with the little catch-up intro video, I was having trouble remembering what I did in the last episode. It was a bit problematic too, as one of the major choices you make in this episode focuses on something that happened in the previous episode. I couldn’t remember exactly what happened so I just had to wing it.

My decision ended up costing a character their life. So yeah, it would have been nice to remember that plot point.

Now, the argument could be made that if the game was good enough, it’d be memorable enough on its own. I feel like that would work on a week-to-week, or even month-to-month episodic release schedule, but nearly a third of a year in between episodes is just too much time to be able to accurately remember much beyond who are the good guys and who are the bad guys.

One aspect of Tales From The Borderlands that really stuck out in Episode 3 was how much I enjoy the characters in this series. Even the bad guys like Handsome Jack and the new villain, Vallory, are likeable to an extent.  Initially, I was a little hesitant as to how I felt about them all, but in Episode 3 it really just dawned on me that I’ve grown attached to this band of misfits on their quest to do…well, whatever it was they set out to do.

If only I could remember.

Overall, Tales From The Borderlands Episode 3 continues the excellent Borderlands-based adventure through new territory. I just wish Telltale Games released them closer together so I could enjoy the cohesive story even more. Still, if you’re the sort of gamer that waits for the series to be finished before picking it up, you’ll find literally nothing to complain about with this one.