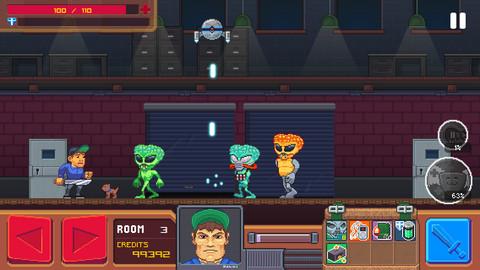 Here! Take My Machete, and then play this iOS game

The funny thing about aliens is that we, the human race, have come up with this idea of what they look like, based on absolutely no evidence whatsoever – merely a concept passed through the ages. You can imagine that if we finally do meet beings from another place, they’re going to catch us completely off guard by looking nothing like what we thought they would.

Fortunately, if they turn out to be hostile we’ve always got the protagonist of Take My Machete to keep them in their place. This is an enjoyable free-to-play experience of quick reflexes, although slightly tighter controls and more varied content would make it essential.

As part of an alien invasion, the green outsiders have taken a band’s instruments. Your job is to hunt down the aliens, kill them all, and grab the instruments back, all with the help of your trusty machete and bow and arrow.

Strangely, you’ll actually end up using the bow and arrow far more than the machete, despite what the title may lead you to believe. It’s all about watching as aliens roam onto the screen, and stopping them in their tracks before they reach you. There’s also UFOs floating about in the air that need taking down too.

After a dozen or so screens of hacking and shooting, it’s onto a gaggle of boss battles that are each pretty well designed and entertaining – the sort that have you watch for a pattern, then move in and mash the chop button whenever an opening is available.

There’s more to Take My Machete than first meets the eye. You’ve got a safehouse where you keep all the spoils of what you’ve found, and building up your collection pushed us onwards through the game. There are also items to buy with coins that you collect, ranging from a pet that you can take with you on your travels, to upgrades and consumable items.

But Take My Machete doesn’t feel truly solid. For one, the controls aren’t up to scratch, especially compared to other iOS titles. We’re talking virtual left and right buttons for movement, and a pull-back-and-let-go mechanic for the bow and arrow – neither of which feel spot on, and led to many a death for our unnamed hero.

It’s never a nice feeling when you die in a game and think to yourself “that wasn’t my fault, it was the shoddy controls” – and we thought that numerous times during Take My Machete.

Then there are certain elements that make no sense, or are pointless. You collect alien heads to play a Wheel of Fortune-style game – but the wheel is filled with question marks, and only tells you what you’ve won when it stops. Seems like the developer hasn’t fully understood the tension of a spinning wheel with the prizes flicking by.

We also didn’t find ourselves wanting to pay a single penny during the game, simply because the items in the store weren’t interesting enough. We just kept grabbing consumables with the coins we’d collected, and that was good enough for us. 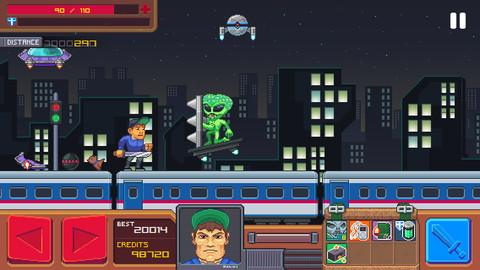 Finally, there really needs to be more content. There are four stages in total, plus an endless mode, and you’re meant to keep playing them over and over, but they don’t really provide enough variety to the point that we became bored pretty quickly. The game needs more environments, and more interesting scenery.

Take My Machete won’t win any awards, but it’s a decent hack ‘n’ slash romp that costs zero cents, and therefore is worth checking out whatever the case.