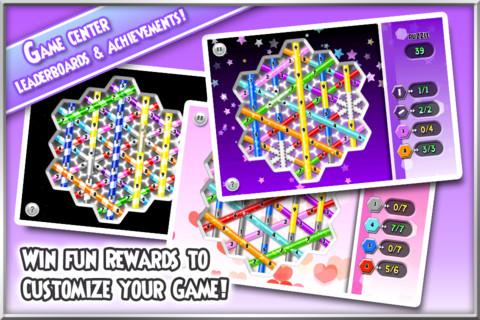 The gold rush of tabletop games to iOS titles continues unabated. As a board and card game fan, this has been most welcome. It’s one of the main reasons I bought an iPad. Even better is by and large they’ve been well worth playing. Next to take a shot at impressing me is Take It Easy. Does it have what it takes to survive the dog eat dog world of my iPad’s home screen?

Based on the tabletop tile laying game of the same name, players take turns (or play solo) drawing tiles and placing them on a large hex shaped grid. Each tile has different colored lines with matching numbers running through each side. Your mission is to get lines of the same color from one side to the other. It’s harder than it sounds though, with all those different colors crossing all sorts of ways.

You’ll score points by getting a solid line touching opposite sides of the grid. The points you get depend on how long the line happens to be multiplied by the number on the tiles. For example: a 3 tiled line of 9’s is worth 27 points. The downside is that you’re sort of beholden to the order of the tiles as they’re shuffled. The tile stack is set and you’re stuck with it.

Much more interesting than the standard classic mode, however, is the puzzle mode. In it, you’ll have to place tiles to satisfy various objectives placed in front of you. The ability to move pieces around to gain a certain number of points or to create set patterns on the board reveals a level of strategy that was sadly missing from the main mode.

The same goes for progressive mode, which was made specifically for iOS and is another puzzle mode, but with wildly changing playfields and objectives. It’s a shame that it takes a while to unlock that particular mode, since this is where the game shines best.

The puzzle and progressive modes succeed in spite of the main game. Classic mode was fun for a round or two, but quickly got old. Game after game, not much changes. You’re just bound by the randomness of the tiles, and not by any overall strategy.

A great puzzle game gives you the tools to plan for a strategy, but to change and adapt that strategy over time and the game progresses. But in Take It Easy, it’s all too common to have a great plan thrown awry by a crappy run of tiles, and without being able to move or rotate anything, you’re just sort of stuck. No amount of skill or aptitude will make the outcome any better.

While I did enjoy the puzzle and progression modes, once played through I couldn’t say I’d ever go back to them again. There’s just no reason to. It’s fine as a short-term time waster, but there’s just very little replay value here. Classic mode feels the same way. Take It Easy isn’t terrible, but it just doesn’t have the legs to be enjoyable for very long.