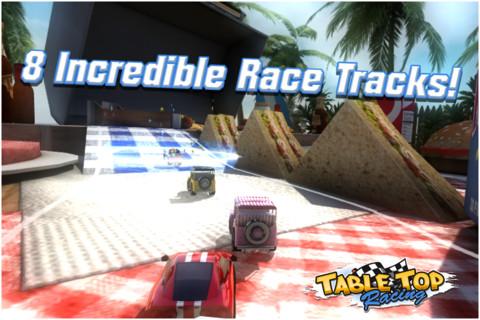 Last one to the lemon wedge is a rotten egg!

When I was kid, there was nothing more fun than driving my Matchbox cars around my room and making engine noises with my mouth. As I got older, the cars I cared about started to get bigger and faster, but there was always a part of me that longed for the days when my favorite kind of cars could still fit in the palm of my hand.

Enter Table Top Racing, a fun-sized new racer that makes me feel just like a kid again, with its Micro Machines-like vehicles and wide-eyed household race tracks. The environments are easily the best part of the game, as you’ll speed past orange juice cartons and bowls of cereal left on the kitchen counter after breakfast; weave your way around scattered power tools in an over-cluttered garage; and pass under archways of building blocks in a colorful toy room. Each track has an absolutely awesome sense of depth, and the graphics are beautifully rendered at every bend.

You’ll start out by choosing between one of two available vehicles: the “Whippy Kai Yay!” ice cream truck, or the “Hippy Bathday” surfer van. It’s not the most exciting selection I’ve seen in a racing game, but you’ll get to unlock 8 other cars by winning Championships and saving up coins. You can also customize your tiny racers by visiting the garage, where you can apply some stellar new paint jobs, or buy upgrades that improve your car’s speed, grip, acceleration, armor, and turbo. Each of the four Championship cups will test your skills in a variety of racing trials, all leading up to the deciding Championship race itself. In true Mario Kart fashion, this final event consists of three or more race tracks placed back-to-back in a competitive circuit, where you’ll bank points towards a grand total that determines your overall standing.

In addition to the four big Championship cups, you can also compete in dozens of shorter Special Events, which are divided into Rookie, Amateur, Pro, and Expert class distinctions, and made available based on your current experience level. These Special Events run the gamut of objectives, although most of them aren’t all that different from what you’d find in the Championship events. From performing solo speed runs, to ramming the lead vehicle, to avoiding being last at the end of each lap, Table Top Racing will always keep you on your toes.

It all adds up to an immense amount of replay value too, and that’s without even mentioning the competitive multiplayer component or going back to earn three stars in every scenario. And just because the cars are small, don’t expect the difficulty to be just as minute. Some of the Championships and Special Events are seriously challenging, but I wouldn’t have expected anything less, considering the game comes from the makers of the notoriously difficult wipEout series on PlayStation.

My biggest complaint about Table Top Racing has to do with the game’s controls. The first thing you’ll notice is the lack of an acceleration pad, as your table top racers automatically move on their own accord. This decision feels particularly strange to begin with, especially since this is a racing game, after all. The mechanics rely on booster pick-ups to give you that real sense of adrenaline, but something feels off about not being able to press on the gas and watch your car gain momentum.

You steer your table top racer by pressing buttons at either end of your device to turn left or right, and a separate button underneath them activates your power-ups. Unfortunately, the placement of these buttons makes it incredibly awkward to boost or fire a weapon in the middle of a turn, as your thumb will essentially be covering up the area you need to be touching. Because of these poorly executed controls, the racing aspect of the game can feel incredibly slow (especially in time trials or chase events), and it only gets worse whenever you’re hit by a bomb or a rocket and are slowed to a literal standstill. 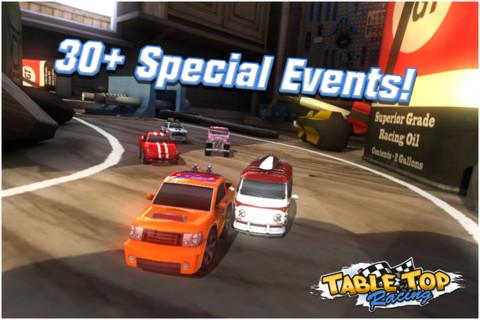 Of course, the speed thing can be remedied a bit by splurging on some acceleration bonuses, but the controls still feel off no matter which way you spin them. There’s also no braking or driving in reverse either, as far as I can tell, which would have really come in handy on a few occasions I can think of off the top of my head.

Most of the track layouts, too, could have used a little more oomph, rather than the same old curves or the occasional napkin jumps. I would have loved to see some spirals or loop-de-loops or heck, even be able to bounce off an orange peel or two!

I’ve always been a sucker for games that shrink you down in size, and let you explore a magnified world of the everyday objects you wouldn’t normally take a second glance at. While Table Top Racing may have a few kinks to work out in the control department before your Micro Machines are running smooth, there’s no denying the imaginative breadth of this game’s inviting household environments, and the incredibly big races that are crammed into such a small package.