By Mike Bellmore | 11 years ago 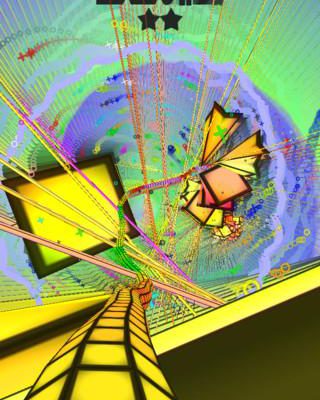 The one thing I admire most about iOS is that it’s allowed independent game developers to try daring new things and make money doing it.  To the ridicule of some and the praise of others, the App Store and other means of digital distribution have allowed developers to veer away from the conventions of mainstream gaming, emphasizing experience over what gamers usually expect: action, high scores, challenge, etc.

I would call Synesthetic an interactive music visualizer more than I would a game.  Synesthetic uses the songs in your music library to construct a psychedelic roller coaster that responds to music.  You careen down a tubular (literally tubular, not slang for sweet) track that undulates to the beat of the song.  Along that track, giant polygons block your path.  These colorful polygons are arranged according to the song as well.  When the music you’re listening to kicks in with a sweeping rhythm section, these obstructions fan out in a way that somehow becomes a visual representation of the sounds you’re hearing.  It’s hard to explain, but when you play, you’ll see what I mean.

To avoid the obstructions you must angle your iPad left or right, causing you to rotate around the cylindrical track.  In addition to allowing you to avoid the obstructions, rotating also spins the colorful, busy game world.  The result is a kaleidoscopic sensory overload of sound, shape and color.  In the background, colors alter themselves along with the music.  Starburst pinwheels spin and spin.  A rainbow of floating X’s and O’s bob by you.  The result is nothing less than beautiful.

If you do hit an obstruction, the volume of the song dips.  This is also where the more game-y elements come into play.  In Flow mode, you gain points as you careen down the track.  The longer you go without hitting anything, the higher your score multiplier becomes.  If you hit something that multiplier restarts, resulting in a lower score.  The thing is, I couldn’t care less about my score. 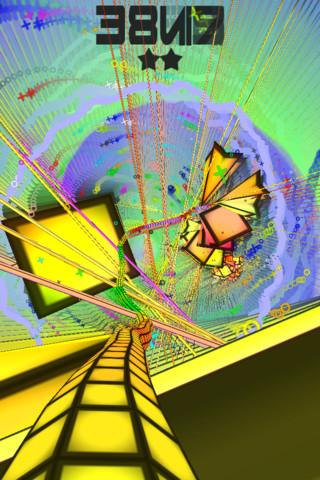 As far as I’m concerned, Synesthetic’s scoring system is at best pointless, and at worst a vestigial element from the games of yore that gets in the way.  I found Synesthetic’s beauty to be marred by the score counter that occupies the top of the screen.  The fact that bumping into an obstruction interferes with the music was enough to keep me engaged.  I avoided obstructions because I wanted to hear the song and enjoy the ride, not because I wanted a high score.

A second, slightly more complex game type called Flux introduces a variety of different colored gates that add to your multiplier if you pass through gates of the same color.  But again, that’s not what I want from this game.  I just want to fly through my favorite songs, experiencing them in a way I never have before.

Synesthetic is a game any music lover should pick up.  When I played my first round, all I could do was smile.  It looks good, it feels good.  It’s a trip.  This game won’t be leaving my iPad anytime soon.

Titanic’s Keys to the Past Review