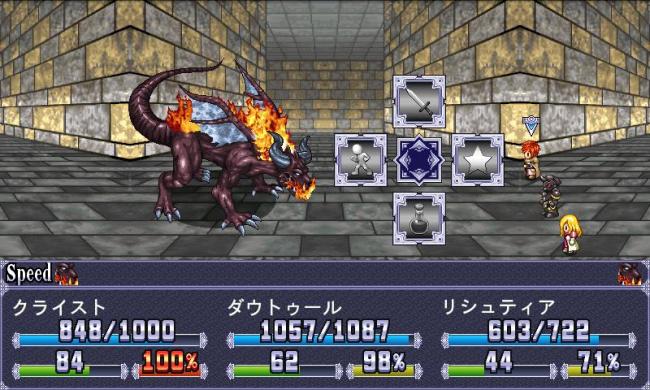 There’s a huge market on virtually all platforms for nostalgic retro RPGs that emulate the look and feel of Super Nintendo classics like Final Fantasy II (called IV, these days). Kemco Games’s Symphony of Eternity is trying to bring that sort of gameplay to Android handsets and almost succeeds. The actual game content for Symphony of Eternity is completely fine, if a bit on the predictable side and at times poorly-localized. Symphon of Eternity‘s downfall is in its technical implementation, where bugs can render the game unplayable on some handsets.

It’s a pity, because the game is a fine time-waster when it works. Symphony of Eternity is the story of three young adventurers seeking an ancient treasure called the Regratlute that can grant any wish. This basic quest takes place against a backdrop of political tension, as a violent military coup has displaced the royal family of Eashrent and left power in the hands of questionable new masters. The game’s world is one of high fantasy and anime cliché, where golems practice kung-fu and exchange witty banter with each other in cutscenes.

Battles are at the heart of gameplay in Symphony of Eternity. The game doesn’t use the completely random encounters that were popular in true 16-bit RPGs, instead replacing them with monster icons that roam through certain area maps. You enter a fight when you touch a monster icon. While the monsters rush at you while you pass through an area, it’s pretty easy to evade fights. Battles proceed by rounds by characters and monsters take actions depending on their speed. There are a few sub-systems you can exploit, like having characters stand in different stances or score consecutive blows to start combos.

The interface for Symphony of Eternity isn’t perfect, but surprisingly comfortable. Everything is handled by tapping the touchscreen with your finger. You move characters around by pointing to the onscreen tile where you want them to go, which is great when it works. Sadly, the game’s pathfinding isn’t the best and navigating towns can become very irritating, as you’re forced to take baby steps to get into shops without your character bumping into walls or NPCs. Navigating the combat menus is entirely seamless.

Symphony of Eternity does not run in fullscreen even on small handsets like the HTC Incredible used in testing, so owners of larger Android models may find themselves disappointed with the game’s fixed size.

A major problem that occurred during this test session of the game were bugs with text and display that occurred after the game was exited and restarted. During its initial session it ran fine, but in later sessions it only booted up garbled sprites and unreadable text. If you enjoy old-school RPGs and don’t mind risking this game’s bugs on your Android handset, though, you may want to give it a try.