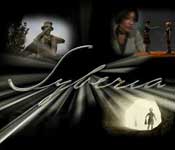 A lot of the games we play require quick thinking and quicker reflexes, which is why it’s nice to take a break every once in a while with a slower-paced but no less engrossing point-and-click adventure game. Like Syberia.

This enchantingly written, beautiful to behold interactive experience stars Kate Walker, a young lawyer sent to Europe to close a deal that would see one of her firm’s biggest clients acquire a centuries-old clockwork manufacturing company. She arrives in a quiet French village called Valadilene to find it populated not just with people, but also aging, metal automatons. More shocking to Kate, however, is that the factory’s owner, Anna Voralberg, recently passed away, willing the facility to her brother Hans, whom everyone in town thought dead for more than 60 years.

Kate’s quest then switches to finding this enigmatic heir. She travels on her own personal wind-up train across the continent to piece together the Voralberg family story and solve the mysteries of their impossibly complex clockwork creations.

The game’s rhythm is gracefully unhurried. Kate wanders through gorgeous, almost photo-realistic locations filled with buildings, statues, and machinations that appear almost otherworldly. It’s difficult to express in words the beauty and daring of Syberia’s art direction; it is perhaps the most visually engaging game of its kind.

As she strolls through the game’s dazzling world, she occasionally bumps into and speaks with the locals. Most of Syberia‘s story is revealed through these dialogues as players click through a series of possible conversation topics and then listen to the resulting chat. Long verbal exchanges between characters can be painful to listen to in many games, but it’s a pleasure to play audience to Syberia‘s conversations, which are skillfully written and voiced by a talented cast. Still, rushed players can just read the text and click through them if they like.

Of course, there are also plenty of puzzles to solve. Careful examination of each environment—carried out by moving the pointer around the screen and waiting for it to change shape, indicating an object capable of interaction—is required to discover both the puzzles and their solutions. Most puzzles involve finding apparatus necessary to make various machines function, but there are also some that require earning the favor of the characters with whom players interact. You might need to earn some cash so you pay others to perform a task, or draw a picture and give it to someone.

The puzzles aren’t particularly tricky, but the lush landscapes make it easy to miss interactive objects. Be vigilant in your searches. Also, expect to do a fair bit of backtracking through environments you’ve already explored as you carry artifacts or information from one location to another. (Lucky for us those environments are so pleasing to the eye.)

The only real disappointment with Syberia‘s puzzles is Kate’s neediness. There are times when she is frustratingly incapable of helping herself, as when she refuses to get her hands dirty by reaching for an oar submerged a few feet into a lake (which, thanks to the game’s superlative graphics, we can see is actually crystal clear). She ends up fetching a local boy to come assist her, and soon after employs him to use the oar as a makeshift lever to open a dam. Feminists probably won’t be particularly impressed with this otherwise modern woman’s persistent need for aid in chores she could easily perform herself.

However, that small gripe aside, there really isn’t much to complain about. Syberia is a lengthy, compelling, and thoroughly attractive adventure game. I found it to be an ideal substitute for a book in bed. Just install it on a notebook computer, prop it up on your lap in the dark, and get prepared to be whisked off to a captivating new world.

One last note: Those readers scratching their heads wondering why this game sounds so familiar should know that Syberia was originally released on CD-ROM back in 2002. We’re reviewing it now because it has for the first time been made available as a downloadable file (albeit a large one—1 GB) through Legacy Games.

And for those of you who haven’t played it before, don’t let Syberia‘s age trick you into thinking that it’s too old to be worth checking out. It was one of the best point-and-click adventure games around when it was first released, and it maintains that status today. There are few such titles that can match Syberia‘s visual beauty and expert storytelling. The only difference now is that it’s cheaper and more accessible than ever before.