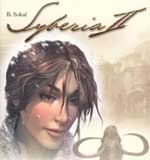 The second and final chapter in comic book artist Benoît Sokal’s acclaimed adventure series, Syberia 2 picks up where its predecessor left off, with lawyer-turned-explorer Kate Walker and her eccentric friend Hans Voralberg in northern Russia and on their way to the seemingly mythical island of Syberia, where woolly mammoths roam free.

While those who have played the original will likely have a greater appreciation for some of the events that take place in this game, a lengthy and informative recap of the first Syberia ought to help franchise rookies get a pretty good feel for the story and its characters.

The sequel takes players through several wintery locations and introduces a pair of villains in the form of Ivan and Igor, who steal Kate’s clockwork train and kidnap Hans with the intent of finding Syberia themselves and harvesting the mammoth’s tusks. The resulting game is a little more action packed than its predecessor, presenting a very real risk that its protagonists might suffer bodily harm or even death.

What hasn’t changed, though, is the series’ gorgeous aesthetic. The beautifully rendered, quasi-fantastical environments are just as lush as those of the original. What’s more, they feel much more dynamic, with plenty of moving objects that help breathe life into the game’s world. The high-quality computer animated movies scattered throughout the story help immerse players even further in Syberia’s fantastic universe.

Also unchanged is the caliber of voice acting. As is usual in adventure games, little clues can be hidden within seemingly pedestrian exchanges with non-player characters, so it’s important to exhaust every available line of questioning. While this can feel like a bother in some games, clicking through Syberia II’s dialogue trees and listening to the often lengthy conversations between characters is not only pleasant but usually quite engrossing. Most endearing is our heroine Kate, who is possessed of a charming, earthy wit often expressed through audible exasperation with the unhelpful bureaucrats and frustrating monks she meets early on in her journey.

Indeed, the voice work is preferable to the game’s text transcriptions, which suffer some French-to-English translation woes, such as occasional misspelled words and awkward phrasing. It’s a minor issue, but should you opt to listen rather than read the problem becomes much less apparent, as most members of the voice cast have wisely taken the liberty of subtly altering their lines so as to remove most traces of clumsy verbiage.

When players aren’t enjoying Syberia 2‘s many conversations and cut scenes, they’re solving puzzles. Most of these puzzles are pretty straightforward and intuitive—such as gathering branches and using matches on them to start a fire and defrost a frozen altar—but there are a few real doozies. I had to refer to an online guide more than once to solve a couple of conundrums, and sometimes even when I learned the answer I still wasn’t sure just how I was supposed to have figured it out on my own. One puzzle, which involved lighting a series of candles in a library in a certain order, remains a complete mystery to me. I know that I must have missed some essential clue, but I haven’t the foggiest notion what that clue might have been or where it was located.

Still, when it comes to adventure games I always prefer that the developers err on the side of difficulty. A player can always look up the answer to particularly tricky puzzle, but there’s no cure for a game being too easy.

In the end, my only real disappointment with Syberia 2 was its conclusion. I’d spent dozens of hours with Kate over the course of two games, watching her make the difficult decision to give up her life as a New York barrister, discover wondrous and enchanting new places, and narrowly escape death at the hands of a murderous thief. I was eager to see a final scene that would show us she had made the right choices, and that her life was not forever derailed.

While the game’s ending isn’t exactly a cliffhanger, it leaves plenty of questions unanswered. And with the developer having stated that no further Syberia games are planned, it seems we will forever be left with this rather dissatisfying finale.

However, even with a less than fulfilling epilogue, Syberia 2 and its acclaimed precursor account for one of the most enjoyable and rewarding point-and-click adventures I’ve ever experienced. Both games are well worth checking out, regardless of whether or not you count yourself a fan of the genre.