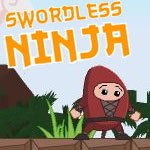 Running. Jumping. Rescuing the princess. It's a formula that we've seen time and again in 2D platform gaming. Mario first did it back in 1985, and thousands of imitators have tried to re-capture that glory since. Now a well-polished pretender to the throne is available for free in your browser. But is Swordless Ninja different enough to set itself apart in a world of Mario-clones 25 years deep?

In a word: no. Swordless Ninja is the tale of Mabushi, a young ninja whose girlfriend is kidnapped by an evil demon. The demon also takes Mabushi's sword so that he'll be defenceless should he go after her. What follows are 20 levels of standard platforming where you'll collect coins, jump on bad guys, and unlock power-ups that will give you some basic weapon abilities. It's like Super Mario Bros. 3, only with ninjas, and not great.

The presentation in Swordless Ninja is definitely the high point of the game. Characters are adorable and well-animated. The music offers a friendly, happy, up-tempo beats that compliments the eastern style of the story woodwind instruments and other instruments of Asian descent. The art style in Swordless Ninja felt like a fresh hybrid of Shawnimals toys and 90's platformers like Bonk's Adventure. The cute factor in these characters is turned up to 10, and we love it.

But the cute factor isn't the only thing turned up to 10 — the difficulty is off the scale too. One-hit kills and tough jumps mixed with fast-paced gameplay mean you'll be playing some levels over and over again before you finally get them right. It can be a frustrating experience, especially when a death comes not from your poor skills but from some less than desirable level design choices. You'll often find yourself jumping without being able to see where you'll land – something the answer is “nowhere” and you'll fall off the bottom of the screen to your death. Other times you may be moving so quickly that you don't notice the green enemy standing against the green background until it's too late. We loved the bright and cheery color palette here, but using a similar color for an enemy as you do for a background was just a poor choice.

Despite the difficulty there is no real punishment for death. You're given a set number of lives, but with an endless supply of continues that let you pick up exactly where you left off these lives serve no real purpose.

With its similar story and its hidden power-ups, Swordless Ninja feels less like a rip-off of early Mario games and more like a homage to them. Unlike those earlier Mario games though, there are some poor design choices here that make the game frustratingly difficult and hard to recommend. While we may have loved the presentation in Swordless Ninja, the execution just needed too much work. This is one ninja party that we won't be joining.