Home / Reviews / Sword of the Stars: The Pit Review 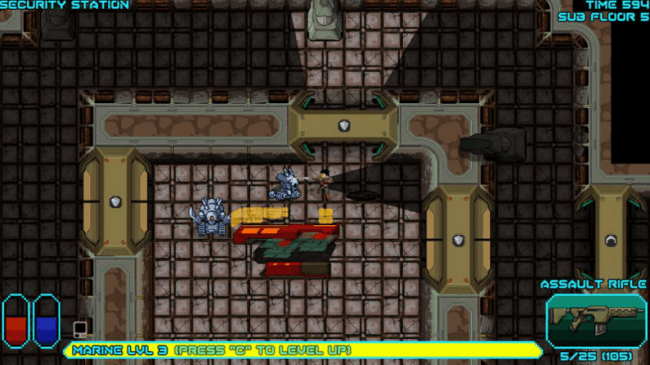 With retro graphics and vicious gameplay, Sword of the Stars: The Pit is a game that hearkens back to days long ago.

The term “roguelike” is used to describe a sub-genre of RPG featuring layer upon layer of randomized dungeons populated by all manner of beasts, traps and treasure. The name comes from the famed early videogame Rogue, an ASCII-based proto-RPG that has inspired and influenced a remarkable number of games in the decades since and that’s famous for being perfectly happy to kill players who get out of line, or just get unlucky.

Sword of the Stars: The Pit is a new, and very true, addition to the genre. Your planet is being ravaged by a deadly plague, and your only hope for a cure is at the bottom of “The Pit,” a legendary facility dug deep into the Feldspar Mountains by the alien Suul’ka. But the Suul’ka are famed for their death-dealing ways, and no expedition into The Pit has ever returned. It’s a pretty thin setup, but games like this aren’t known for being big on story, so it’s an excusable flimsiness.

You’ll play The Pit as either a Marine, a Scout or an Engineer, each with its own strengths and weaknesses. It’s a good balance, in the sense that they’re all terrible; the Marine can dish out all sorts of damage to enemies but his thick skull keeps him from being of much use for anything else – bad news when the bullets run out – and while the Engineer is far more adept at accessing computers and repairing broken equipment, his value in a fight is dubious. Characters have three stats – might, finesse and brains – and a wide variety of skills ranging from ranged and melee weapon proficiencies to computers, medical, mechanical, scrounging and more. Each class starts off with a big bonus to the appropriate stat and skills, but can increase any of them with each level.

The interface uses the WASD keys for movement, arrow keys to aim weapons and the spacebar for most (but not all) other interactions, a bit of an awkward setup at first but functional and easy enough to adjust to, and the turn-based movement means you can take a break at any time and come back to the action at your leisure. The game has one save point that automatically marks your progress when you quit, and if you die, it’s wiped and you’re back to square one.

The Pit looks, sounds and plays like a game straight out of the mid-90s, with a deliberately pixelated visual style that’s not ugly by any stretch but that can grow monotonous at times. Aside from geometric variations, level designs are cookie-cutter affairs with dull, repeating backgrounds and very sparse room decoration, often nothing more than a single bed or table. It’s a largely unavoidable consequence of the game’s procedurally-generated nature, but there’s simply no getting around the fact that it’s not the most exciting visual experience ever.

Sound effects are likewise fairly minimal. Enemies make brief but not exactly terrifying noises, weapons produce little more than pops and beeps and although there is a soundtrack, for some reason it plays at a much lower volume than the sound effects, to the point that it’s almost impossible to hear – unless you’re at the menu, where it’s much louder and actually pretty groovy. The occasional bits of voice acting that spill out randomly when an enemy is killed also play at such a low volume that they might as well not be there.

But the gameplay’s the thing, and this is where I’m torn. On anything beyond “easy” mode, The Pit is a nasty, mean-spirited game, as roguelikes generally are, but I can’t help thinking that in some ways it goes a little too far. Hidden traps will blow you up, burn you with acid or choke you with poison just for stepping on the wrong square, and doors are often randomly booby-trapped, sometimes to good effect and sometimes to very ill. Weapon upgrades called “Bio-mods” have completely random effects on your arsenal, sometimes good and sometimes bad, and there’s no way to tell which it will be without installing, after which it’s too late.

Supplies are very hard to come by, especially for the marble-brained Marine, who is almost wholly reliant on explosives and lockpicks to open uncooperative containers and doors; bullets tend to be scarce, forcing players to rely on melee attacks with a knife to conserve ammo, yet that drives up the threat of poisoning or disease, which requires specialized medical equipment to cure – which is even scarcer. Worst of all is the constantly looming specter of hunger – the hunger meter ticks down with alarming speed. 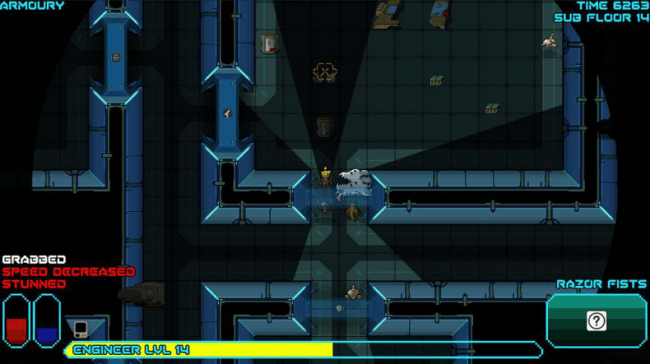 Supposedly helping counterbalance all this is the crafting system, which lets players use “cookers” or “lab stations” to whip up a variety of items ranging from basic foodstuffs to advanced, high-tech equipment. The trouble is that recipes are required, and they’re only available in encrypted alien messages stored on random (and, to be blunt, rarely found) computer stations that must be accessed and then decrypted before they can be read. Experimentation will uncover recipes as well, but items used in failed attempts are lost and cookers and lab stations have a limited number of uses, discouraging an excess of messing around. Recipes you learn in one game will be valid in all others, the idea being that you’ll accumulate recipes and grow better prepared to survive over multiple games, but you can expect to play for an awfully long time before your recipe book is anywhere near respectable.

(There is one way to avoid the wait: Hit up your nearest Sword of the Stars: The Pit forum and look for recipe lists. It’s technically cheating but it will make your life, at least as it relates to this videogame, a lot easier. Developer Kerberos Productions is a good place to start.)

The part that has me torn is that a lot of roguelike fans will say that’s exactly how it’s supposed to be; that games like this are supposed to be difficult, capricious and unfair, and that keeping you from the end is the whole point. I’ve been around long enough to know that’s a valid point, but I suspect that Sword of the Stars: The Pit might be a little too hardcore for its own good. For serious aficionados of the genre this is a must-play game, but everyone else would be well-advised to try the demo first.