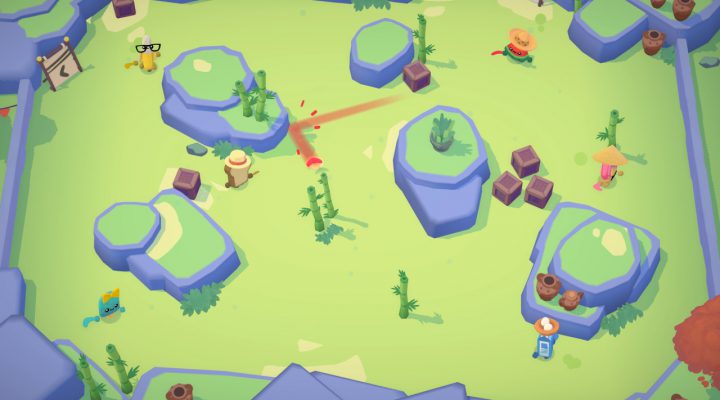 So here are some shorter reviews of games released or updated on the Switch over the last few months – that we might not have got round to covering otherwise. Don’t get too excited, but you can expect another round-up fairly soon too.

A arena-based multiplayer game with adorable presentation, Boomerang-Fu is hard to fault. You play as a range of food items – from avocados to pints of milk – and can attack your opponents with a boomerang.

You can either throw the boomerang or attack with it at close range, but the risk/reward balance is perfect – as one hit is enough to put someone down (in amusing fashion – deaths see the food items sliced clean in half).

Add in a good number of different arenas as well as a solid mix of power-ups and you have a title that’s well worth trying out at your next games night. It’s just a shame there’s no online play.

Retro first person shooters are a very tough thing to get right. Too often we see games that mimic the look of titles like Doom and Quake – but comprehensively fail to get the gameplay right.

So it’s a shame that Exodemon falls into the same trap, although it’s not a complete lost cause.

A pixel-art FPS that sees you exploring a space station, it looks the part. The set-up is interesting too, with you playing as a scientist finding themselves slowly infected by an alien entity.

The combat fails to satisfy though, as there’s simply not enough feedback given when you’re shooting foes – and you never move as quickly as you want.

There’s also the fact you restart levels from the beginning once you die – this was never part of old-school FPS games, so why this is implemented is baffling. It simply saps your enthusiasm to keep playing.

The level design is occasionally interesting, but sadly it’s not enough to make this worth investigating – especially when superb ports of Doom and Quake are already available on the system.

We’ll get straight to it, we weren’t huge fans of Nongünz. When it comes to fast paced roguelikes – like this one – you want the controls and movement to be spot on. And here it just…isn’t.

Boasting a striking monochrome pixel-art aesthetic, you play as a skeleton who has to battle their way through other skeletons – and many other monsters besides.

You’re given precious little information on why you’re doing this, but that’s refreshing in a way. What isn’t refreshing are the intentionally limited controls.

You can only shoot forwards unless you’re sliding, which brings its own problems – as levels are crawling with obstacles and enemies.

It’s simply not much fun, and often feels difficult just for the sake of it. The visuals also make it a little too tough to work out what’s going on at times – making this a game that’s for masochists only.

It’s hard to grumble at what developer ​​Lightwood Games do on the Switch. They create stacks of word and number games at budget price-points. What’s not to like. Or at least, what there’s to complain about.

Gaps is arguably one of the developer’s better titles, as it sees you guessing a list of words – and then having to complete a new word using selected parts of those words. Trust us, it’s very simple.

And that’s it – it’s very bare bones. There’s no online leaderboards for your times, and once you’ve completed the set number of puzzles you’re done.

The only real flourish in the presentation is that the main character – a dog – makes a relevant pun every time you complete a puzzle. This ultimately is not a bad bet for those looking for a new word game to play. What more is there to say?

Where’s Samantha is a game that desperately wants to be loved. A puzzle platformer where you’re transformed into a piece of cloth and have to find your partner, it has some lovely presentation.

This includes a storybook cutscene before every level with full narration. Yes, it’s a bit too twee – but we can’t fault the effort.

The same goes for the gameplay really, which throws some fairly simple block pushing puzzles your way and then adds in just enough different obstacles your way to keep your attention.

It’s just never truly exciting, and feels like it’s stuck in neutral for much of the time – which is a shame, as there was real potential here.