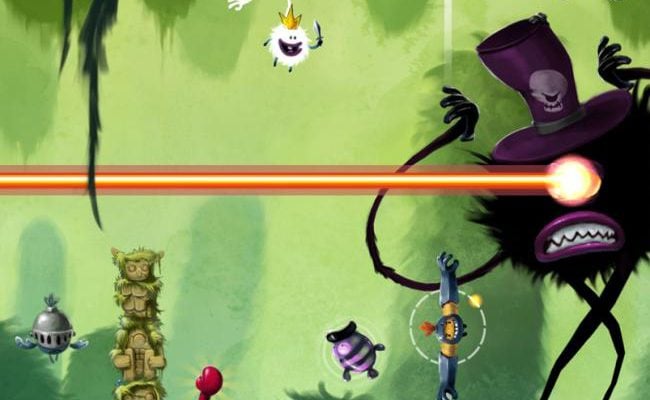 He rules over the land with a sticky fist.

The story of Swing King is one we can all relate to: our fuzzy monarch hero, who is apparently part sticky hand toy, is canoodling with his frog Queen one evening.  Out of the night comes a much taller, Cat-in-the-Hat-hatted fuzzy villain, who steals the stars from the sky.  Our hero swings into action, hoping to reclaim the stars with the help of his trusty unicorn steed, and get back to his romantic evening.

If you’re able to ignore the gaping plot hole in Swing King‘s story—everyone knows fuzz and sticky hands don’t mix—you’ll be drawn into a physics-puzzler that is as bizarrely charming as King Oddball and as varied in its challenges as Cut the Rope.  You control the King directly, using his stretchy head-hand to slingshot him between grippable platforms (flying monster friends), terrain he can bounce off of, stars to collect, and other obstacles, with the ultimate goal of landing on his unicorn hovering at the “end” of the stage.  As with any physics shooter, the King follows an arced trajectory that can be lengthened or shortened depending on how you aim him: however, his path is always highlighted with a dotted line so you see exactly where he’ll end up.

This is because Swing King‘s gameplay, despite requiring precise aiming skills, is more about choosing the correct objects, and order of objects, to bounce off of.  Although you’ll be able to see where he will end up after the initial catapult, the King will almost always land in a different area after he finishes bouncing, rolling, or falling.  The order of events becomes increasingly important as the difficulty picks up, with levels that will require you to: collect a boxing glove before knocking down rocks, only use certain platforms a single time, get to stars before their timers count down and they fizzle out.  These variations—and many others—on the standard “aim and shoot” physics model keep Swing King consistently fresh.

Adding to the novelty are “boss fights” that become available at the end of each 20-stage world.  These levels play out similarly to the standard stages, except the goal is to collect a boxing glove and then launch yourself at—and punch—the giant, star-stealing fuzzy villain while he’s attempting to shoot you with his laser beam eye.  Each boss fight contains three levels of eye-punching which must be completed to open up the next world. 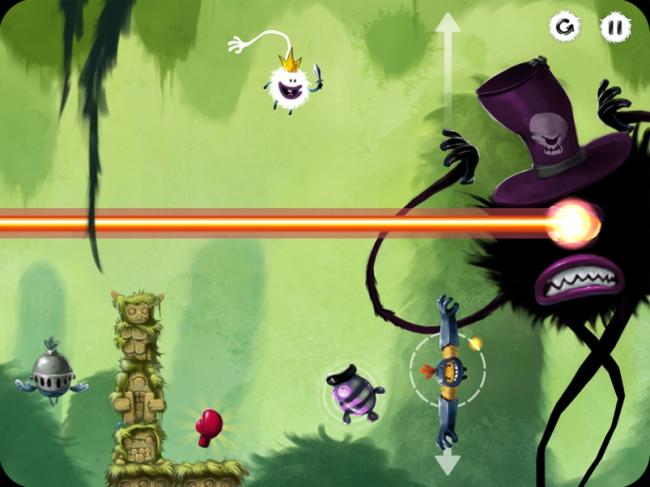 When you’re not bouncing around the standard stages or going head-to-eye with the big boss, there are of course achievements to complete.  Most of these involve collecting all of the stars in a level, although some feature challenges such as bouncing only one time or purposely avoiding stars (in a star-heavy stage).  They are all noteworthy, though, for including related rewards for completion: hats that the King can wear!  Although scores should probably be their own reward, there’s a very special joy in outfitting the King with a hotdog hat or purple afro and then flinging him around some more.

Although these achievements add an extra level of challenge to the game, Swing King is admittedly lacking in difficulty through the first three worlds.  The different obstacles and features that are introduced do add additional layers of challenge, but rarely to a point where any stage takes more than one or two attempts to complete at 100%.  This changes in the fourth and final world, but unfortunately not because the puzzles become harder—this jump in difficulty arises from the game shifting focus to movement- and magnet-based puzzles, which are more about delicate and finicky touch screen controls rather than puzzle solving and completion. 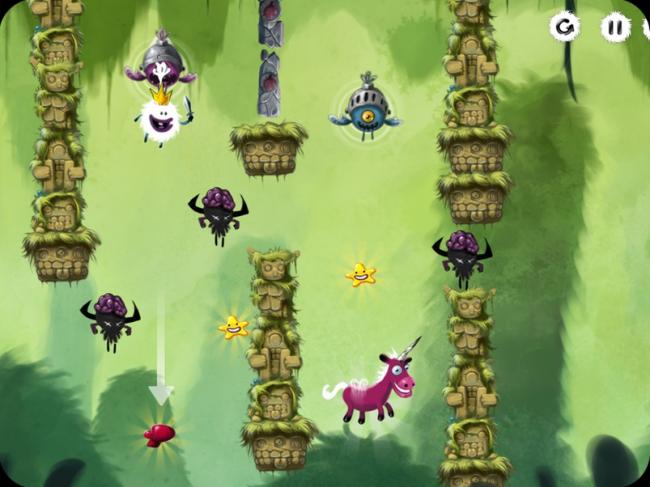 Despite this imbalance in difficulty, almost every stage of Swing King is still a treat to play.  The game is full of those small touches that can easily go overlooked, but indicate true love on behalf of the developers: the golden crown that appears on your unicorn when all stars have been collected; the little speech bubble from the King when he’s inside a fish cannon, saying “I’m in here!”; or the fact that one of the King’s power-ups is an actual green sticky hand.  These may not affect gameplay, but they affect the gamer: they bring out a smile, a laugh, and nostalgia for silly-gooey toys, just like Swing King.