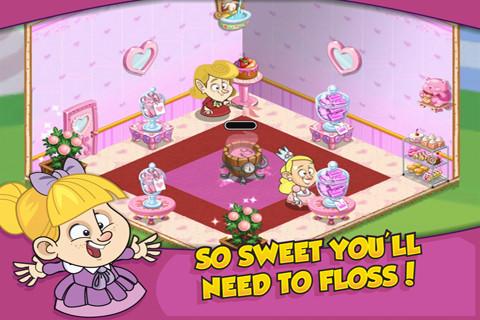 Another free-to-play business simulation game has launched on the iOS platform with Breaktime Studios’ new app, Sweet Shop. As yet another addition to the sim genre though, it’s hard to truly classify the title as “new,” and even more difficult as Breaktime takes the TeamLava route of essentially reskinning one of its older games. In this case it’s the app of Pocket Potions, and while that wasn’t a bad game, the newest incarnation does absolutely nothing different.

Players have been chosen to run a wacky candy shop by an owner suspiciously resembling the original vision of Willy Wonka. That’s about the extent of the story premise, as after a rather short tutorial, it’s up to users to begin populating their new found virtual candy store with goodies, and more importantly, paying customers.

The play of Sweet Shop is commonplace amongst most business sim games of this nature, but for those that have played Pocket Potions, it is literally copy and pasted. Players gather ingredients — either by buying them in packs in the store or collecting them from plants they can buy with the virtual currency of Gems — and place them into a cauldron for cooking. Taking a few seconds to mix, a well-timed tap will mix them “perfectly” yielding a percentage bonus to the amount of candy produced. Depending on the level of the sweets being made, the longer they will take to make. And should the player not return in time, they will spoil, forcing them to either recover them with Gems or start anew.

Making money is pretty standard too, as once a treat is done being prepared, it can be jarred and placed on tables for customers to automatically purchase. So long as the tables are full and patrons find the candy they are looking for, the rating of one’s shop will increase, which in turn increases the number of customers that come through the door. This can also be increased by several decorations that they will admire (which unlock as the player levels up), such as displays or mascots, but unfortunately, these are only buyable with Gems. The decorum bought with regular game currency is nice, but seems to have no added benefit.

Despite being a carbon copy of Pocket Potions gameplay-wise, Sweet Shop does still have many of the fixings that made its predecessor appealing. Since one of the core appeals to such games is the aesthetic aspect of them, Breaktime Studios takes a good deal of care in how its items look. Many of the purchasable decor come with character and style with many of them being animated and more than a static object. Also like Pocket Potions, customers that purchase candy and eat it will have amusing effects happen to them (e.g. the first candy turns them into a sour lemon). 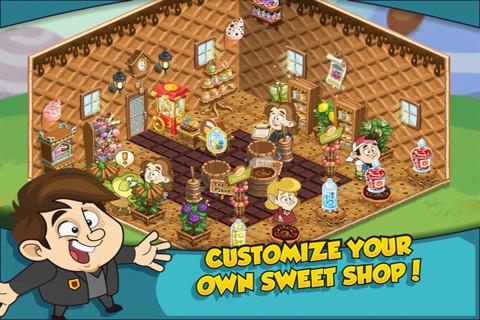 The game also goes the TeamLava route in terms of social play, too, allowing users to interact with both their friends and the general game community. Upon using the social tab of the app, players can visit random users of the community to see their virtual space, and leave up to five gifts (one per user) that contain random ingredients for making candy. For each gift left, players will also receive a boost to their “Karma,” which appears to increase their chances of being seen in the community tab of other players.

All in all, Sweet Shop isn’t a bad game, but it’s absolutely nothing original. Really, the only appeal is for fans of the business simulation genre that simply want to look at something a little different. With the style and characterization of much of the décor and characters in the game, Sweet Shop is higher quality than others of its ilk, but feels absolutely no different from its predecessor, Pocket Potions. That being said, if such doesn’t bother you, then this new title is likely worth a try.