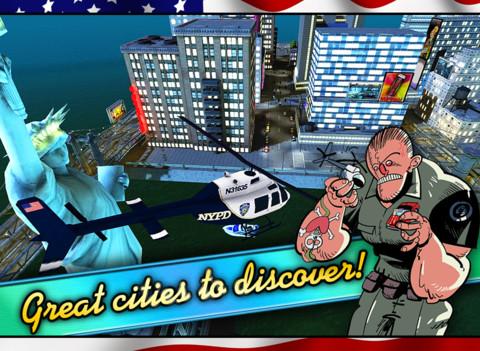 Suspect in Sight police searches its way into the spotlight

Every once in a while, news channels will pick up a police chase and show the events live on the air. While a criminal does his best to outmaneuver his pursuers, he’ll often be bested by the persistent trailing done by police helicopters whirling overhead. In Suspect in Sight–the first title from Jujubee Games–you’ll take control of the whirling chopper that puts baddies behind bars. It’s up to you to clean up the streets of three cities by tackling crime from a bird’s eye view.

The gameplay of Suspect in Sight is extremely simple: Fly your helicopter over a highlighted vehicle (the suspect) and keep your spotlight on the fleeting car until a police officer in pursuit rams them. You’ve got 60 seconds to catch as many as you can, with time being added for every suspect stopped. There are power-ups that you can snag along the way to help with different aspects of your pursuit, but basically you’ll just try to catch as many suspects as you possibly can in the allotted time. The same rules apply with every unlocked city or helicopter.

The first thing that should be noted about this title is how the tone of the game is absolutely pitch perfect. Jujubee set out to create a game with the feeling of a 1970’s police drama, and they nailed it completely. Everything from the comic book style cutscene graphics to the lighting around the city and the funk-style music that plays in the background is everything you’d expect out of a cheesy cop flick. The graphics are stupendous, if not bit reminiscent of the Grand Theft Auto series, and the sounds are authentic and interesting (though a bit repetitive). The aesthetic is good enough that a casual observer may mistake the entire experience for one of those “World’s Worst Criminals” type reality show.

Suspect in Sight was clearly a project that was designed to make the most of every part of iOS technology, because along with the gorgeous graphics comes a pretty solid use of the accelerometer for controls. While it’s not always convenient to control a game using the entire device, it’s definitely a preferred experience with this title. Swaying the iOS device to control the helicopter allows for some surprisingly precise controls that make most chases easy to follow. It’s hard to say the same about the joystick, which sadly felt more like an afterthought than anything else. It’s available, but it’s not as effective and you’ll find yourself spinning around aimlessly in attempts to lock back onto your target.

Even with tight controls, frustration sets in when a particularly crafty criminal keeps losing you with banking turns and sudden changes of direction. It’s a challenge to keep up, but stopping those suspects is far more rewarding than the quick and easy ones. The problem is, you’ll be dealing with those moments a lot.

This game is full of grinding to max out stats and reach the next level. Even after a particularly good run that consists of stopping many waves, you’ll be rewarded with a few hundred XP points and are told to keep going. The gameplay isn’t varied enough to justify the amount of times Suspect in Sight expects you to take to the streets in attempts to sweep up crime. The task becomes increasingly tedious the more you play because it just doesn’t change much.

For a first effort, Suspect in Sight shows a lot of promise. It successfully puts to use every feature that an iOS gaming enthusiast would want from a title while delivering a unique game. The stylistic theme that is carried throughout the game is spot on, and it makes the experience pretty immersive. That said, the game tries to coast a little on that uniqueness and doesn’t put a ton of time into varying the gameplay. Suspect in Sight is a fun challenge – just don’t expect a lot of variety.