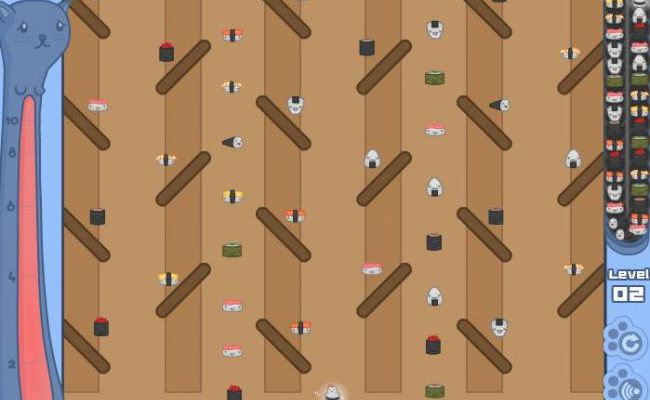 Sushi and cats go together like… well, they don’t go together at all really. But who knew that such a pairing could prove to be so charming? Sushi Cat, Armor Games’ take on the Japanese peg board game Pachinko, is a cute romp bolstered by some solid physics-based gameplay as well.

Our hero is a pudgy purple cat who is faced with a series of challenges that could all go away if only he were bigger. Inspired by seeing a sumo wrestler, the cat decides to bulk up by chowing down on as much sushi as possible.

The game’s levels are Pachinko-style peg boards littered with various platforms, bumpers and pieces of sushi. Instead of launching a small silver ball into the board, however (a la Peggle) you’ll drop the cat from the top of the screen after aiming it carefully with a pair of chopsticks, with the goal of collecting as many sushi rolls as possible on the way down. 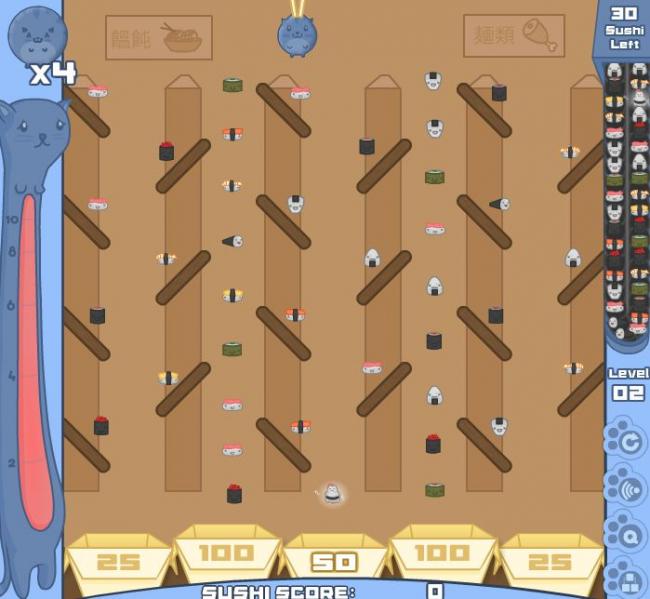 You have to eat a certain amount of sushi per level to achieve “Full Belly,” and you have a certain number of turns to do it in. You have control over where to drop the cat, but the rest of the turn, to a large extent, is up to luck as the cat bounces through the course. You can earn various score multipliers and bonuses too, based on where the cat bounces and lands.

The game’s cute Japanese aesthetics are a visual treat, but I was even more impressed with the sophistication of the game’s physics. The cat’s soft, flexible body behaves like a balloon or beanbag that bounces realistically, and can be squished or even wrung through tightly-packed pegs and moving platforms. The cat gets bigger and heavier as he eats more, which also affects how he travels.

There’s decent variety to the levels as well, which start out simple but quickly become cluttered with spinning, sliding and angled platforms, and special types of sushi that grant different bonuses. 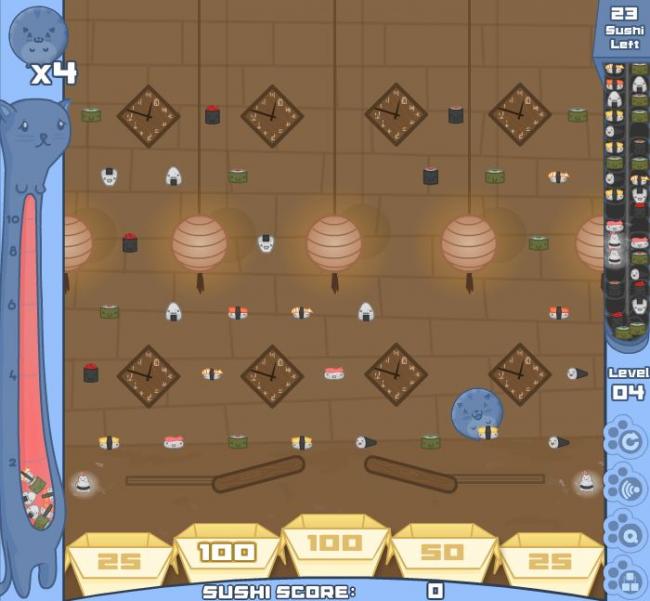 In spite of the degree of luck involved I found the levels to be fairly easy: that is to say, I only failed to collect enough sushi a couple of times. Given how enjoyable the game is, too, it seems a shame that there are only 15 levels of sushi-infused goodness before the kitty’s journey comes to an end. Of course, there’s always the incentive to play again and aim for a higher score, which can be shared on Facebook and Twitter and compared on a global online leaderboard.

This charming Web game is certainly worth a look. If Sushi Cat‘s charm doesn’t win you over, its gameplay probably will.