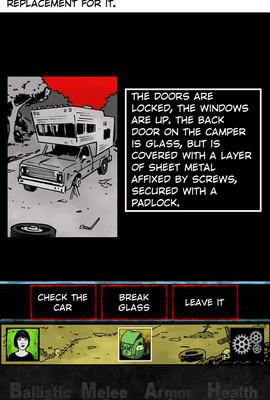 What do zombies and Foursquare have in common? Survivor Z.

Since I’ve never shot a gun and have a tendency to be way too trusting, I probably wouldn’t last long in a zombie apocalypse. Survivor Z by Mongadillo Studios and 3 Jacks Software is driving that point home even more since its text-based RPG adventuring and turn-based combat incorporates real world locations. Yes, the struggle against the undead is now personal on your iPhone, but that doesn’t mean it’s any easier.

At least you don’t have to worry about any fancy goals. Your job in Survivor Z is just to keep living, period, something the game wryly notes that you can put your full attention to since you no longer have to worry about a job. The opening sequence of the game deals with the initial stages of the zombie outbreak, introducing some of the tough decisions you’ll have to make while getting you acclimated to fighting, searching and other useful skills.

After holing up in your well-stocked bunker for about 10 months, it’s time to check things out topside and find out what’s left of civilization. It’s not much, to say the least, and you’ll spend most of your time scavenging useful stuff out of the remains. Food and water are the top priorities, but you’ll also come across weapons, protective gear (the better to avoid nasty bites from the infected) and a variety of tools and other items. 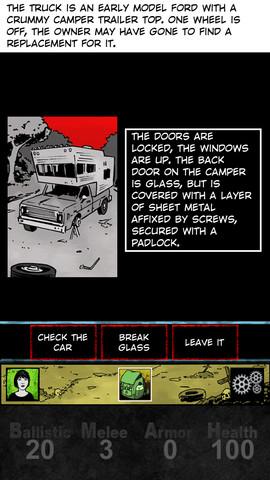 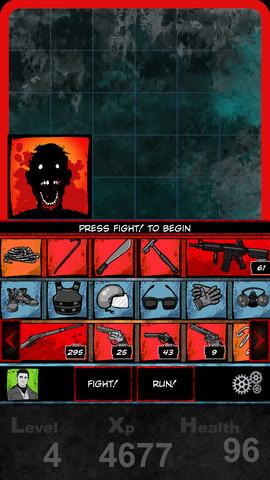 The descriptions of the post-apocalypse world are well-written even if they do repeat after a while. In some places, you’ll have choices of several different actions, and since both the undead and other survivors can be threats, the game keeps you on your toes. Think of it as kind of a grown up Choose Your Own Adventure exercise, except with more rotting corpses.

The real killer hook is the way the game uses the location services built into your iPhone to populate the game world with real-life locations near where you are playing. It certainly enhances the mood to be searching through the elementary school down the block rather than a generic locale, and you can freshen things up just by taking your phone on the road with you. The only problem is that the game occasionally misinterprets buildings in unintentionally hilarious ways, like when it mistook a small café near my house for a sports arena.

Scripted encounters mixed in with the random exploration help propel the story forward while testing your problem-solving skills. Usually this means putting items you’ve found to creative use, and though the game does give you some hints, it doesn’t just hand you solutions. This feels right, but it does sometimes leave you at the mercy of what random stuff you’ve scrounged (although that’s probably how it would work in a real apocalypse, now that I think about it). 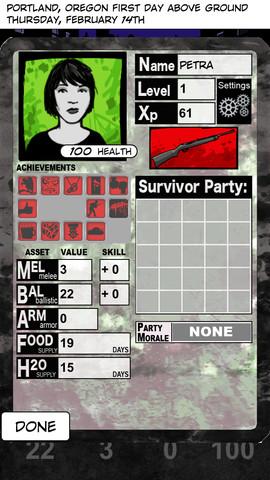 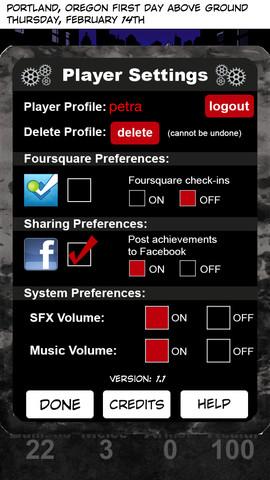 When things get violent – and they will – the fighting takes place on a grid. There’s a bit of strategy involved in terms of initiative, but the combat mostly boils down to choosing a weapon and a target and watching things play out for that turn. All characters start out with the same skills, and the only way you’ll get better is to practice, just like your mom told you.

If you get too lonely, you can convince other survivors to join your party. They’ll only do it if you have enough food and water for everyone, and you need to keep morale high to avoid desertions or mutiny. These interactions definitely add something to the gameplay, and NPCs make good cannon fodder for the zombie hordes. Picking up a few is highly recommended.

That doesn’t stop things from getting monotonous after the novelty wears off. There’s too much time when you are simply hitting the ‘Keep Searching’ button over and over, especially when you are stuck at a certain part of a scripted encounter. The sparse presentation, while keeping with the game’s theme, doesn’t help matters. A special shout does go to whoever composed the music though, as it creates just the right feeling of grimness and foreboding.

Survivor Z has some cleverness to it, enough to warrant a look in what is a very crowded genre. It’s not the kind of game that will eat up all of your waking hours, but if you’re a zombie enthusiast – especially one who travels enough to get the most out of the location-based mechanic – you may find it creeping its way into your daily routine.