Survival of the Fittest Review 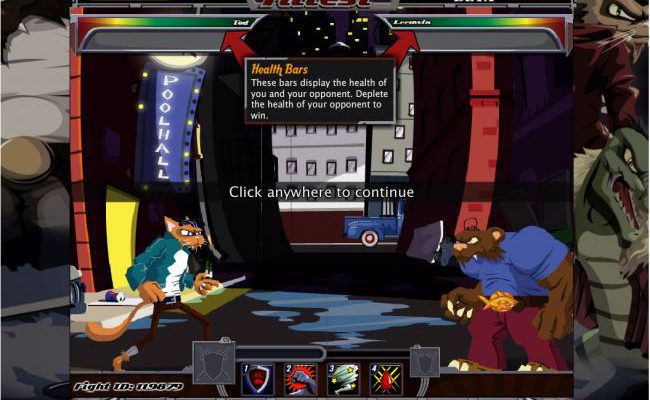 Survival of the Fittest has a wild cast, but it’s a pretty tame fighting game

If you’re old enough to remember the good old days of playing video games in the arcade with a joystick and some brightly colored buttons, you likely will recall the beast-based fighting game Primal Rage. Fast forward to the era where the term “Arcade” conjures up images of a menu on the Xbox, and we find that developer Izelis is channeling that old fauna fighter with Survival of the Fittest. The title, built for Facebook, pits players against one another in a battle for animal supremacy.

The game allows players to pick between three different characters. They are, in order of curiousness: a cat, a bear, and a dinosaur. Why a cat, a bear, and a dinosaur? Why not, I ask you? They all have their own unique strengths that influence your style of play. The cat is wickedly fast and relentless. The dinosaur, who looks more like a mean lizard than anything, possesses the strongest attacks. This leaves the bear, which digs its claws in and stands its ground with the best defense of all options.

Once you’ve chosen your fighter, you’re dropped into the arena. This is where you spend the majority of your time in the game, pitted in combat against either other online opponents or an AI challenger. The AI-controlled characters present far less of a risk to you, but they also bear less impressive rewards. On the other hand, the AI never taunts you via verbally abusive messages after the match, so figure for yourself if those big bounties are worth the loss of self-esteem.

The fights place two characters on the battlefield to face off one-on-one. Rather than utilizing standard fighting game controls, Survival of the Fittest strips out the direct control in favor of a handful of triggers that you use to fight with. Hitting one of your triggers launches one of four skills that you use throughout the fight to chip away at your enemy’s health bar or protect your own. Whether you use a direct attack or improve your own skill set with a temporary bonus, each ability has a charge time that must be filled before it is launched, and the stronger it is, the longer it takes to recharge. 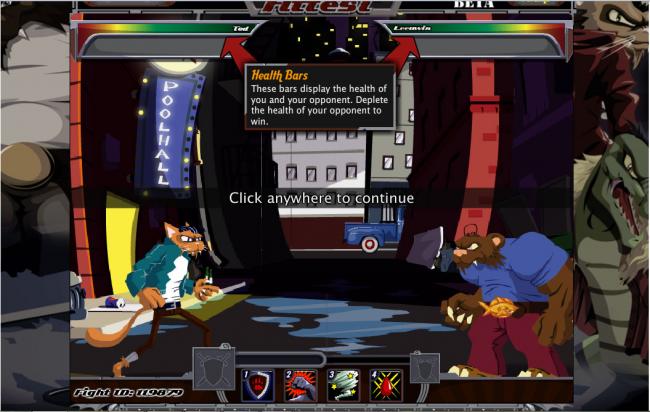 Post battle, you land the expected experience points and some currency that allows you to purchase items. An easier way to score some currency is to just buy it, because earning it through fights won’t add up to premium items, unless your friends are really into taking beatings on a regular basis.

If you’d rather not pay up, you can focus on building up experience. Experience is what dictates your level, and when you reach a certain experience level, you level up and unlock a skill, or gain the ability to add a talent point to a particular ability.

If you plan on dropping some coin on Survival of the Fittest, you’re able to snag some gear that will give a continuous bonus to a particular skill throughout a battle. The gear also adds an aesthetic appeal to your character, unless you have terrible taste. There is no compensating for that.

The fights don’t last too long and don’t require tons of strategy—the game is very accessible for people that have never played a fighting game. That said, if a person really wants to invoke some tactics, they can do so through character upgrades and skill customization. 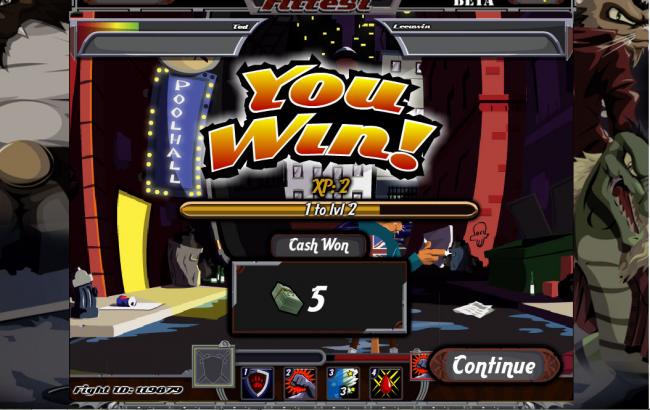 There could be even more strategy involved if there were some actual content in Survival of the Fittest. The game features three characters and a handful of skills, but there’s little more. The purchasable items add a bit more strategy, but you still fight the same types of characters with similar combinations of skills. The limitations of fights are mostly due to a lack of variety. There are a handful of users that play the game regularly, but it still leaves a lot to be desired.

Survival of the Fittest is a good game to throw a friend who doesn’t usually play fighting games, but the fun doesn’t last too long. Once the game has some more characters, skills, and upgrades available, it will probably be a worthwhile title. For the time being, it just has the promise of what it might be someday.