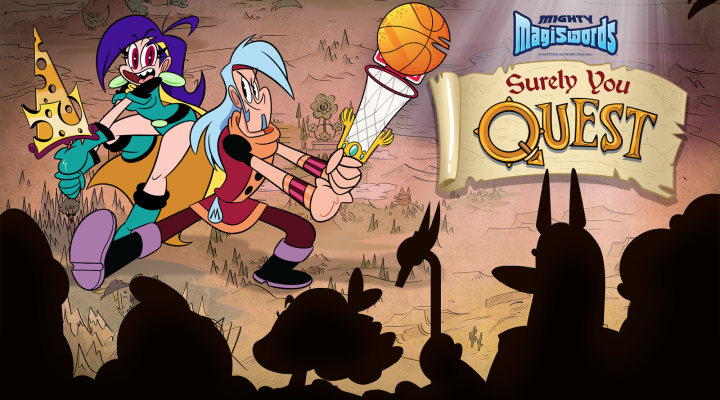 Easy gameplay gives everyone a chance to really enjoy and feel victorious in an RPG.

Will likely be too easy for hardcore RPG fans.

Surely You Quest is the first mobile game based on the Cartoon Network’s Mighty Magiswords universe, but don’t let that fool you into thinking that only kids will find this title any fun. Available on both Android and iOS, Surely You Quest is an RPG that doesn’t take itself to seriously – or seriously at all. If you’re looking for a serious challenge, this might not be one for you. However, if you’ve got a sense of humour and a quick index finger you’ll have a blast.

For those unfamiliar with the basic Mighty Magiswords concept, you’re playing as Vambre and Prohyas Warrior, an inseparable sister-brother duo. They’re fearless adventurers who make themselves available as warriors to help pay for their obsession with Magiswords. In the television and web series their passion for Magiswords and desire to collect them all can lead them to make some reckless decisions from time to time, but things usually turn out ok in the end.

In Surely You Quest, Vambre and Prohyas are on a journey to compete in and win Princess Zange’s big adventuring tournament. However, before they can be registered as official participants they must prove their worth as adventurers. In order to do so, they take on all manner of challengers along the way, testing their skills against giant hands, floating bunnies and haunted trees channelling the spirit of Marcel Marceau.

The gameplay itself couldn’t be simpler. There is a colour at the base of each enemy you’ll face (purple, green, orange or blue). Choose the Warrior sibling that has the sword of the matching colour and set to work on conquering the enemy by tapping them as fast as you can. As you deal damage you’ll power up the sword’s special move. The special moves are as unique as the swords themselves. Excaliburger Magisword attacks the enemy with flying hamburgers while the Accordion Magisword’s special move confuses the enemy with strange music leaving you with enough time to launch a barrage of attacks before they can get you back. Once thing’s for certain, you’ll never doubt the power of a bubble wand again after playing Surely You Quest.

Victory in battle brings rewards in the form of gems and experience points.  The gems are converted to in game currency while the experience points help you in levelling up. Each time you level up you’re given a rewards chest, sometimes containing a new Magisword, other times upgrading one within your existing collection. Levelling up happens quickly, so you’re never waiting too long for your next reward, yet if things aren’t moving fast enough the in-game currency can be used to both upgrade and buy Magiswords once you’ve found your way into a town.

In-game currency can also be used to purchase slugburgers. If either Vambre or Prohyas lose their health points in battle (or start running seriously low), the burgers can be dragged over to revive them and restore health points – concrete proof that burgers are indeed good for your heart.

Surely You Quest is an ad-supported free-to-play game with rewards for ad-watching, but the ads (which feature other Cartoon Network products) don’t yield in-game currency. Instead they double gem rewards from battle and in some cases can provide a Magisword upgrade. So as tempting as it is to go all out with upgrades and burger purchases because in-game currency is mostly earned through gameplay, it’s best to think before you spend if you want to make it to the tournament in peak position.

A cool twist on the TV tie-in, some of the Magiswords can only be unlocked by watching the series and learning the passwords. They can be fed into the game either by playing the show near your game device so it can pick up on the audio or you can make note of them and feed them yourself later. While watching the show and collecting these Magiswords isn’t necessary, it’s a neat way to thank loyal fans of the show.

Beyond the gameplay, the graphics are everything one would expect from a Cartoon Network offering as are the sound effects, an advantage of having the resources of a television network at your disposal. Although there are reports of frequent crashing on Android this wasn’t a problem directly experienced on either Android or iOS in playing for the purposes of this review.

Overall, Surely You Quest isn’t the most challenging game you’ll ever play. It’s probably also one that’ll quickly be forgotten once done. But the few hours you’ll spend in its world will be full of laughs and quality battling fun. If nothing else, it’s worth giving a go as you unwind from a long day and a longer commute – the frantic screen tapping is a bit like having a private rage-room in the palm of your hand.