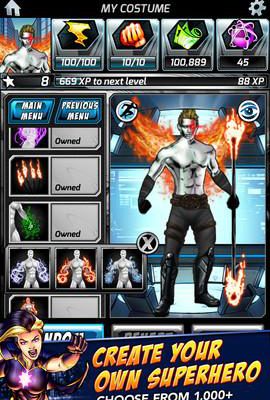 Pretty much everybody loves superheroes. Well, except for super villains I suppose. About the only thing people love more than talking about their favorite heroes is creating their own.  I mean, let’s face it: “What’s your favorite super power” is a fairly common question in any age group. So along comes Supreme Heroes to give iOS gamers the chance to create their own personal do-gooder with their own look and special abilities. Unfortunately, the experience is rather flat.

Supreme Heroes is a sort of mix between different free-to-play models. Half of it is the fairly typical energy/stamina fueled gauntlet of missions and PvP combat, and the other is all about collecting and upgrading cards. There are a number of different cards available that represent limited-use items, equipment, and most importantly, super powers. Each can be earned through completing various missions, but the fastest and most effective way is by purchasing card packs of various rarities. And don’t worry about getting doubles; powers and equipment can be mutated and fused, respectively, to create more powerful cards which result in more formidable heroes. 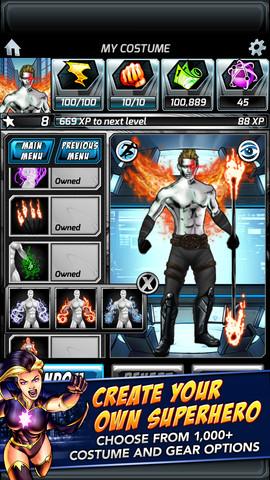 The card collecting in Supreme Heroes strikes a pretty nice balance between the number of different cards available and the requirements for upgrading. Unlike many other iOS CCGs, each power and piece of equipment has a rather low maximum level that makes upgrading a lot less of a hassle. Four copies of one power are enough to max it out, actually. Of course the trick is to acquire multiple copies of much more powerful rare cards because commons just won’t cut it for very long, even if they’re all fully upgraded.

Assigning powers is handled automatically, and the strongest are given the most importance, so there’s also no need to agonize over figuring out what cards to place where. About the only real setup players have to worry about is what gear to equip. But as simple and painless as everything is, there’s still a fairly prominent sense of progression as heroes get stronger and stronger.

So I can create my own custom hero using a respectable amount of wardrobe choices, and fit them with quite a menagerie of abilities. Yet Supreme Heroes still feels rather bland to me. The wide range of character combinations is certainly welcome, but the artwork seems a bit awkward in places. It’s kind of difficult to get too excited about customizing the look of my hero when the character proportions look off, or certain outfit pieces don’t line up quite right. 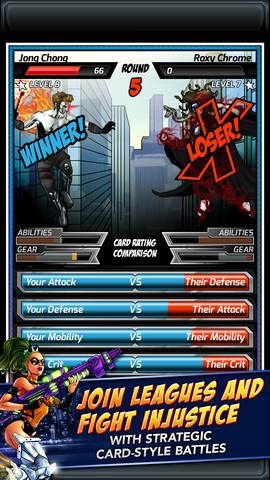 What really disappointed me, however, is the total lack of regard for all the various super powers. The cards look nice, and the descriptions can be interesting, but they’re really just numbers being tacked on to the hero’s stats. Sure I can generate storms and ride the air currents with little effort, but that doesn’t really mean anything to me when all it does is make my hero’s Mobility rating go up by 143 points. It takes the “super” out of all the super powers.

Supreme Heroes is a decent free-to-play CCG with lots of powers to collect and upgrade, as well as other players to spar with and show off your costume designs. But it’s just not as big and bold as I’d have expected a game about super powered crime fighters to be. I mean it’s not bad; it’s just rather bland.