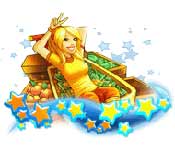 Apparently, each year the average American consumes 4 pounds of potato chips, 30 pounds of cheese, 56 gallons of soda pop, 75 pounds of sugar, and 221 pounds of meat. Yikes! Anyone getting indigestion? Around 2.4 million people are employed the grocery stores that provide this food, and supermarket cashiers earn a about $7.90 per hour on average. It might not be the best paying career on the planet, but hey, it’s a living.

In Supermarket Mania, it’s time to earn your salt. The big conglomerate Torg Corporation is everywhere, and so you hesitantly decide to get a job working in the Torg Supermarket as a stock girl. You thought you did so well! Well, Mr, Torg did not agree. After being retrenched and replaced by a team of robots, you are lucky enough to find work for the tiny, run-down grocery store owned by Mr. Clarence. The question is, can you help him defeat his old nemesis and run the best supermarket in town?

You can fill up five stalls with a full food cart (seven with an upgrade). Once empty, you need to refill your cart. To fill your cart, click on the stockroom and wait until the gauge is full. The cart’s stock is shown by a gauge on the lower right side of the screen.

In addition to stocking shelves, you must clean up any trash that might trip your customers, and drop it in the recycle bin. If you want a boost of energy, a cup of coffee will really boost your speed.

Customers are autonomous, and have different patience levels and food preferences. There are also special clients, like movie stars, teenagers, and thieves. Teenagers are usually good shoppers, but sometimes get unruly and create trash around the shop. Thieves never buy food, but walk around thinking about what to steal. If you chase off a thief before he has attempted to steal, he will stop and move onto another good, and continue to wander around your shop. If you catch him in the act (as he snickers, and the image above his head vibrates), you will receive a bonus cash reward, and he’s carted off to jail. Both of these miscreants can be dealt with by summoning Mr. Barefist, the burly security guard. When a movie star enters your shop, all other customers will stop to take photos. Movie stars are very impatient and demanding, so you must be sure to keep them happy with well stocked shelves and quick service.

In between each level, you can purchase a variety of upgrades. Many can be carried over as you advance to other stores, like food and cart upgrades. Some upgrades must be purchased again whenever you move to a new store, like the security cameras, and the coffee and gumball vending machines. Still others, like repairing the flooring in your first shop, become obsolete as you move on.

With 50 levels and 5 different shopping centers, Supermarket Mania should only take an experienced player around 4 hours to beat. There are different challenges to play at each level, such as a level where you must catch most of the thieves to win, or a level where you are bombarded with movie stars, so the game keeps itself from becoming monotonous. Even after you’ve beaten it, you can always go back and replay different levels to try and get all expert scores. The art is a basic 3D, with comic book style cutscenes, and the music is fun and different in each shop. The pacing is hectic, but the customers are patient enough to allow the player time to think. While time management is nothing new, it has enough unique twists to prevent itself from becoming cliched.

There’s plenty that would be nice to see in the sequel, which the story hints is a possibility. There are lots of upgrades, but it would have been cool to see more power-ups. Similarly, there is no built-in system for making combos, which would have been a neat addition to add a further challenge. It was also a bit of a bummer to pay for an upgrade, only to lose it again when moving to the next store. I would have liked more variety in the different shops, since most of them had the same atmosphere despite different music and different layouts.

If you’re looking for a time management game with a light story and accessible game play, Supermarket Mania should keep you entertained. While it’s not as challenging as some other time management games – like Diner Dash, Wedding Dash or Doggie Dash, it does keep the pace frantic, and offers enough surprises to keep the user interested.