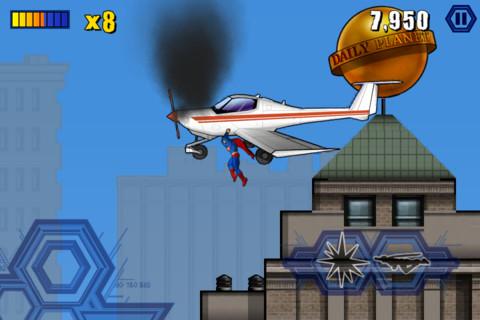 Superman flies up, up, and all the way to the App Store

Let’s face it, there have been a lot of bad superhero games and Superman, in particular, has had his fair share of questionable ones. Nevertheless, the new Chillingo-published Superman has recently flown up, up, and away to the top rankings of the Apple paid app charts. Though it doesn’t look like much, this arcade-style title comes off as surprisingly addictive. That said, it offers little in terms of any depth, and oozes with every Superman cliché imaginable.

Lex Luthor is looking to “better” the state of humanity with his new weather control satellite. It goes without saying that he’s likely up to something as Superman moves to investigate. This narrative is a bit shallow, but loosely ties together the various levels that players move through. Regardless, it means little as the style of game play is what really matters. While it might not appeal to everyone, its corny nature is actually quite a lot of fun.

Players move about a 2D rendition of Metropolis controlling the Man of Steel himself. As they’re flying about, various crimes and disasters will begin to occur and will be indicated by arrows that point to their local. The idea is to fly to the location and deal with the problem. Of course, it’s far more difficult than that.

Superman is set up sort of like an arcade, survival type of game. In each level, different problems will arise that Superman needs to deal with. As the level progresses, more and more disasters will occur and the “life” of the city (shown in the top center of the UI) will begin to deteriorate. Players must deal with all the active disasters before that occurs. Upon completion of these waves, the level will typically be ended with some new, not yet seen, type of disaster.

These disaster types are the real star of the show, and the catalyst for the game’s amusement factor. The fact of the matter is that Metropolis has got to be the worst city, ever, to live in. Players will have to deal with robbers, get-away-cars, fires, stray missiles, crashing planes, falling space debris, meteors, Lex Luthor’s robots, and more – all on a regular basis.

To deal with each of these, players will fly at Superman-level speeds using digital buttons and a digital analog stick and make use of a contextual Superman power. Based on the disaster, this power will vary from his strength, to frost breath, to heat vision. For example, if Superman is near nothing, he will use limited heat vision (it must recharge after being used). If he is near a fire, he will use his frost breath. And if he is near a crook, he’ll knock him flat on his backside (which is hilarious, by the way). Moreover, when players are flying, or running, at max speeds, they can plow right through enemies as well. In terms of disasters like missiles or crashing planes, players must catch up to them to grab a hold and either smash them or land them safely.

The other goal of the game is to do all of this in as fast a time as possible. Like many iOS games, Superman grants players with bronze, silver, or gold medals based on how they do. Users earn a score on each level based on how quickly they dispatch enemies (to boost a score multiplier) and how fast they finish overall. That in mind, it doesn’t add that much to play. It was just fun to run, faster than a speeding bullet, through a stream of fleeing criminals. 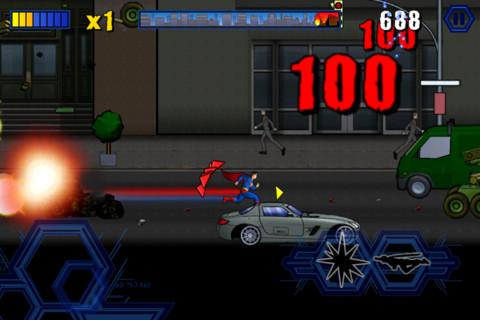 Visually, Superman is a little hit or miss. It is saturated with primary colors and feels a bit reminiscent of the old school comics, but the overall presentation of the game seems like it’s less than what it could have been. Also on the down side of things, it can be a bit difficult to accurately hit enemies while trying to move quickly. Since the super powers are contextual, players will not always get the power they want. As an example, if you are too close to an enemy, Superman will punch instead of using heat vision, yet it is still possible to be too far to hit them. Since players are trying to move fast though, they’ll often then find themselves behind the enemy, using heat vision in the opposite direction, after the initial miss.

Even with this issue, Superman is a good bit of fun. Yes, it’s a little shallow and the visuals are a bit dull, but overall it makes for some good, simple game play. Will it be something that appeals to everyone? No, not really. But it is a great, arcade-like title that is ideal for killing a few minutes at a time. Cheesy and a little absurd with all the threats towards Metropolis, Superman is a decent game that’s well worth a try.