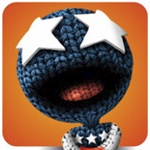 Take the height challenge of Doodle Jump, turn it upside down, and add in the ragdoll physics of games like Stair Dismount and you have Superfall – a survival game that sees just how far you can fall before things come apart.

Superfall is a game of survival. Like many of its contemporaries, survival is all about distance. How far can you make it before you reach your breaking point? How much can you endure? In each stage you’ll take a doll and drop him. As he travels downward he’ll encounter an endless series of obstacles, gadgets, and other hazards. It’ll be your job to navigate this doll by tilting your iDevice left and right to keep him safe. Eventually your doll will take damage to different body parts, and eventually those parts will fall off. The game ends when your doll takes too much damage and ends up as little more than a head, or if you get stuck on a platform before you get that far.

The controls here are very reminiscent of Doodle Jump, but since you’re trying to fall instead of trying to climb you’ll use those controls to avoid objects rather than land on them. The obstacles you’ll encounter along the way include grinding gears, touch-sensitive bombs, and giant fans – but they’re not the only things you’ll need to worry about. The stages in Superfall are littered with items that will affect your doll – some good, some bad. Touch a bottle of alcohol and your doll will get drunk, reversing your controls. Touch fire and their head will be engulfed by flame, causing damage. More positive items are there to help you along the way, too. Health packs, experience points, and even a floating head that will change you into different dolls are scattered throughout every level.

The stages in Superfall appear to be randomly generated, so you’re never going to experience the same stage twice. The game also offers 30 dolls to unlock, all with their own unique physics tweaks. Combine these two elements alone and you’re looking at a game with seemingly endless replayability – but Superfall also offers achievements and an OpenFeint leaderboard to let you compete against your friends.

The presentation here lacks a certain sense of originality -the characters style seems to be greatly inspired by the sackboys in Little Big Planet – but that doesn’t mean they don’t have their own charm. With 30 dolls at your disposal you can expect to see everything from ninjas to Elvis make an appearance. Regardless of the variety, though, the visuals aren’t nearly as polished as the gameplay. The environments feel cheaply made and lack any real style. In light of the gameplay though, this is something that can be overlooked.

Superfall is an interesting hybrid, combining gameplay elements culled from popular iPhone fare like Doodle Jump and Stair Dismount – yet it never feels like it’s a mere imitation. Despite some clear influences, the Superfall experience feels wholly unique. It’s fun, fast and friendly, and has that pick-up-and-play vibe that so many iPhone games strive for. If you enjoy the “how-far-can-you-go” survival gameplay of games like Doodle Jump and Canabalt, Superfall adds enough to the genre to keep you entertained for ages.