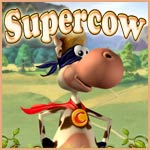 The sun was shining, the birds were singing, the crops were swaying in the breeze and the farm animals were basking in the beauty of it all. Life in Sunny Valley was good, very good indeed. One day, however, everything changed: the infamous Professor Duriarti escaped from prison. Immediately, the cold-hearted villain seized the humble homestead and incarcerated its inhabitants. All seemed lost!

But then, Supercow caught wind of the dastardly deeds. And, armed with determination, set off on her mission to thwart Duriarti’s evil plans and rescue her barnyard buddies. Honestly, she wouldn’t be too super if she didn’t.

Supercow is a typical side-scrolling platform game, but decidedly more friendly to casual players than old-school games of this genre. It’s challenging without being overly difficult and serves up a good dose of wholesome (kinda like milk) entertainment for everyone from Junior to Grandma. From its rural setting to the way enemies are dispatched, it’s family friendly from the start.

The game’s charming level-by-level storyline of battling foes and rescuing livestock is presented through a mix of diary entries and voiced-over cut scenes. Action transpires via a single game mode with a one-size-fits-all difficulty setting, while play begins simply with a goal of finding the exit. Later level-based objectives include eradicating all enemies and locating the hidden keys necessary to unlock an exit. Thankfully, the challenge is never too great for anyone to overcome.

Supercow, the character, is maneuvered (or is that manoooovered?) with keyboard or mouse. Still, it’s best to employ the former. The keyboard’s a much more precise instrument for directing Supercow’s actions. Activities, as you advance from one level to the next, are pretty much limited to moving left and right, jumping up and down, and collecting bonuses while dispatching Duriarti’s minions.

Nefarious critters, incidentally, are comprised of an assortment of snails, dogs, moles, crows, spiders, frogs, bats and a few other pesky varmints. Simply hop on their heads to “harmlessly” eliminate them. Bonuses, on the other hoof, include coins, gold, gems, nuggets, bracelets, lockets, goblets, rings and more. Dispatched nare-do-wells and collected goodies add to your point total and affect the score achieved in each level. Not satisfied with your rating? That’s okay. You can restart any of the game’s 56 levels (spread across 10 stages) if you wish.

Of course, Supercow wouldn’t be all that super without a few well-placed power-ups. Health-enhancing objects to scout for are tasty fruits, “extra-life” hearts, cartons of super-milk and first-aid kits, to name a few. In addition to re-energizing your health after run-ins with Duriarti’s evil underlings, these goodies add to your point total, too. Each level also includes one or more Deja Vu mushrooms, stationary yet friendly fungi that serve as mid-level save points should Supercow fall victim to the enemy and lose a life.

Other objects come into play, as well, as you bound through the colorful, pastoral countryside. Springs in barrels and old mattresses serve as launch pads to treasures above. You can even walk on clouds to collect assorted baubles, just as long as you don’t stop moving. Linger too long on these fluffy “platforms” and you’ll fall through. Rakes also appear, but don’t step on them or, as in the real world, they’ll smack you in the head. Too many knocks on the noggin and you’ll lose a life.

Supercow is a pleasant diversion for all ages. It sports eye-catching graphics, depth-defying parallax scrolling, cute animations, an atmospheric soundtrack and audio effects, excellent cut-scene voiceovers, and a solid dose of good-natured humor. Plus, in addition to all the point-enhancing goodies collected during play, numerous awards are earned by the heroic heifer on her way to confronting Professor Duriarti, viewable in the game’s Trophy Room. Examples include honors for reaching major point milestones, collecting all valuables and ridding all enemies on a level, and completing a level without losing any lives or health.

The only real cow patties that litter this side-scrolling adventure are a lack of difficulty adjustment, a paucity of special character attack moves (other than simply jumping on enemies’ heads) and the absence of in-game helps.

In the end, though not the most original or challenging platform game to hit the cow path, this bovine side-scroller is still udderly enjoyable. Supercow‘s a great “just-one-more-level” favorite the whole family can enjoy.