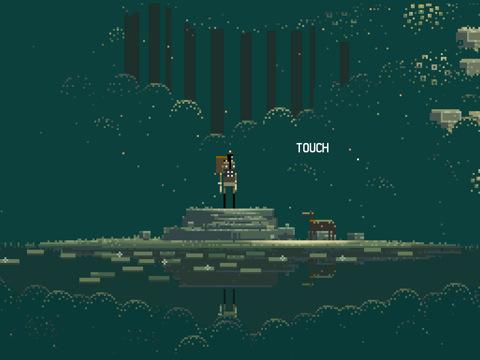 Superbrothers: Sword & Sworcery EP might just be the wittiest, hippest, and most engrossing adventure on the App Store

There are two things that I really want to accomplish over the course of this review. 1: I want you to buy this game by the time we’re done here. 2: I don’t want to spoil any part of the experience for you in the process of selling it to you. Normally I’d say it was impossible to accomplish both at once, but let’s give it a shot!

Superbrothers: Sword and Sworcery EP is a point and click adventure game of the most common nature. You play a singular hero who needs to defeat an overpowering evil that’s ruining the land. You’ll click around the screen to move around and interact with objects. You’ll talk to people and complete simple puzzles and tasks. Like I said, common. But that’s what the game is about, that’s not what the game IS.

Sword and Sworcery is a game about experiences. Of funny dialogue and the moments where something special seems to peek and wave around the next corner. It’s when you rotate the iPad to unsheathe your sword and do battle. It’s the always present feeling of adventure you get when the game’s fantastic music kicks in as you hit the road out of town. The abject fear when you awaken the ancient evil with no way to kill it, and the solace you find in talking to your dog.

The writing is genuinely witty, with gems like “In a subterranean corridor we spied an ominous statue but we didn’t worry too much about it” or “We were like groan not another fetch quest amirite?” The game has this constant feeling of being self-referential to the point and click genre, but always takes itself seriously. Like the designers are there off-stage with a nod and a wink. It’s a fine line to walk to be funny but not hokey, but they totally pull it off.

The one complaint that you’ll usually hear about point and click games is that the puzzles can sometimes be a little too difficult or the answers to obscure. Like you’re trying less to solve the in-world puzzle and more trying to figure out what the game designer was thinking. Sword and Sworcery has none of that. With no inventory and limited controls, there’s just not many ways to solve things, so it’s never a chore and typically the solutions just fall into place simply. You won’t be quitting because you can’t find the answer.

One of the things I really enjoyed about the game was moving in and out of combat. Typically you’ll play the game horizontal and you’ll interact with a 2D side view of the world. Rotate the iPad horizontal though, and you unsheathe your sword and the game switches to an over the shoulder view and you get screen controls to block with your shield or swing the sword. The fighting is a pattern recognition system like the old Punch-Out! or a very simplified Infinity Blade. 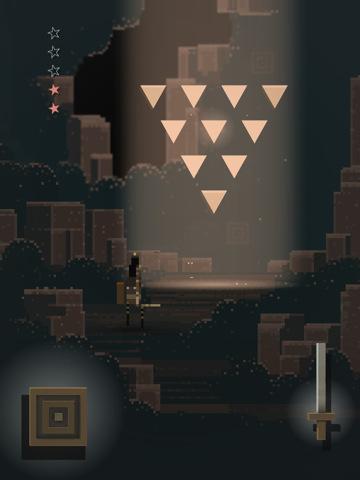 I mentioned it quick at the top of the review, but the music takes what it already a really good game and helps make it great. I’m glad they remind you to put on headphones at the start, as the soundtrack is high enough quality that it would be a real shame to the overall experience to just play it through the iPad speaker.

The game has a super pixelated style that initially seems to strip away all available detail. But once the characters start moving around and you see the background the details begin to really come out of the woodwork. It’s both amazing and effective as an art style. I was never sure whether to play all zoomed in for the detail or pull out to take in everything at once.

After I play a game I can always tell how much I enjoyed it by how much the negatives bother me. If a game has a few issues but provided a wonderful experience, those negatives tend to get pushed aside. The puzzles in Sword & Sworcery are on the easy side, likewise for the combat. In truth it’s less a game and more an adventure story you get to play through. But it’s such a wonderful experience that at the end I was left with nothing but good thoughts and am happy to sing its praises. Do yourself a favor and buy this game.