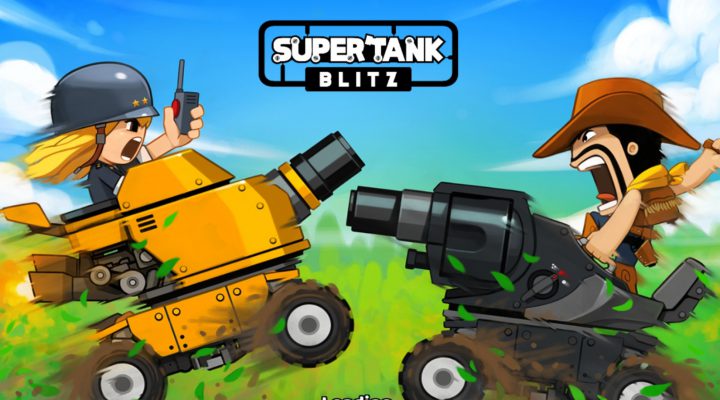 Simple, fun PvP for all ages

Surprisingly deep strategy for those who seek it

Building tanks is a bit complicated

There are almost as many ways to scratch your competitive itch on the app stores as there are games, but sometimes you just want to go test yourself against other players with a minimum of fuss. Super Tank Blitz allows you to do exactly that, offering quick, lively PvP tank battles that can be enjoyed just for what they are or reward you for diving into all the game’s systems a little deeper.

At its core, Super Tank Blitz is a simple, 2D multiplayer tank vs. tank affair. Far from a simulator, the game allows players to choose from a wide variety of armored vehicles simply by playing — even spending an hour or so will unlock a few different tank commanders. The stylized, exaggerated graphics emphasize that this is a title appropriate for gamers of all ages, and the tanks simply explode into their component blocks when blown apart, so the violence is strictly cartoon-style.

Controlling a tank is (most likely) a lot simpler in the game than it is in real life, and a quick tutorial explains the controls: A virtual thumbstick on the left moves a vehicle forward or backward, while several buttons on the right operate the weapons. The battles have ragdoll physics like many other mobile games, so there is some skill involved in aiming a tank’s weapons or simply keeping it upright, and having a tank knocked on its back and being unable to right it is one of the game’s few real frustrations.

That comes into play more often than one might think because the object of every battle is to either reduce the HP of your opponent’s tank to zero or shove them back off the cliff that is part of each of the game’s map. Each clash lasts just two minutes, making Super Tank Blitz a perfect way to engage in some PvP action without investing a ton of free time.

Even if 1v1 was all it has to offer, Super Tank Blitz would be worth a download to try out. Happily, there’s more in store for anyone who keeps at it, including 2v2 battles that can get truly frantic at times, as well as a Survival Mode.

Progression involves winning trophies in battles, and all trophies won count toward the game’s Trophy Roadmap, so players can experiment with different commanders and vehicles without feeling like they are locked into any of them. The matchmaking system keeps battles somewhat fair, though it’s not hard to tell when an opponent knows what they’re doing within seconds of starting a match. Basic social features include party options and the ability to invite friends to team up for 2v2 clashes.

Deep but Not Intuitive Building

While part of the fun of Super Tank Blitz is upgrading to bigger and better versions of each commander’s tank, it also allows mobile gamers to customize all but the most basic vehicles using a block-based construction system and a wide variety of weapons and equipment (that can also be upgraded themselves). Experimenting with builds isn’t complicated because the blocks are drag and drop, but this is also the part of the game that could have used a more detailed tutorial, and younger players, in particular, may find it daunting.

Still, getting a build that emphasizes your particular play style can be rewarding, and there are enough different goodies to discover to really make a tank your own should you be so inclined.

Uncovering more tank-building options is done mostly via reward chests won by using keys, which unlock slowly over time — maybe a little too slowly for people who find themselves hooked on these particular tank battles. Gems can speed up this process and are available as in-app purchases, but it’s also possible to win more just by playing.

It’s also not hard to imagine that many people won’t care much about the deeper aspects of the game anyway and will just love dropping in and blowing other players’ tanks into colourful smithereens. On that front, Super Tank Blitz definitely delivers. You can download it now for free on Google Play and the App Store to see for yourself.