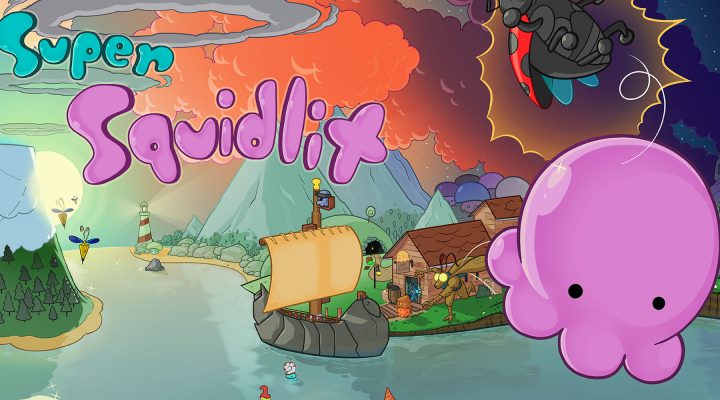 A little too frustrating

The Game Boy Color wasn’t short of 2D platformers. From Lola Bunny to Lucky Luke, everyone seemed to make an appearance in the genre.

So Super Squidlit – which is developed via a recreation of the GBC’s engine – is up against it from the off. To justify its existence it has to do something very different to the titles it’s looking to emulate.

Sadly it doesn’t play on the overused tropes of the genre quite enough to make it stand out from its inspirations, but it’s still not an entire bust.

You play as Plip, a squidlit which can jump, double jump (thanks to ink propelling him upwards), and barge. You’re tasked with teaming up with old foe where you have to…well, the plot isn’t too important really.

What is important is that the first Squidlit – an ode to the titles of the original black (well, green) and white Game Boy – was over before it really got going. This sequel is far larger in scope, with a variety of locales to work your way through.

They all use suitably gaudy colour schemes, but sadly there’s not enough environmental hazards for our liking. From ice caverns to beaches you’ll generally find yourself facing the same enemy types over and over again.

The action itself is never hugely satisfying either. It relies on you slowly moving to the right, lest you get attacked by an enemy popping up out of nowhere – and most of them are not much fun to fight.

And as much of the game is jumping and facing enemies this is a bit of an issue, and one most won’t be able to overlook. If you start to get frustrated and try to rush through stages you will be smacked down immediately too, something that won’t endear this to many.

This set -up is very faithful to the Game Boy Color platformers of yore admittedly. But it’s not something we imagine many will relish reliving – we certainly didn’t.

Fortunately Super Squidlit avoids being a bit of a damp squib (squid?) by sheer force of personality. This is a game that has clearly been made with a lot of love, and that does shine through.

There’s several pieces of amusing dialogue, some unique level settings, and even some rudimentary first person sections. The latter are very shonky, but we appreciated the effort to mix up the gameplay.

Still, this isn’t quite enough for us to fully recommend Super Squidlit. It definitely has a certain charm, but it’s certainly not a title that will appeal to everyone.