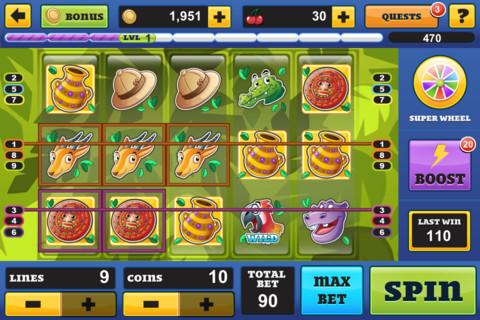 TinyCo hits the casino for a little one-armed bandit action

TinyCo is known for making tiny games. Not small games, mind you, but games that actually have the word “Tiny” in the title. That makes Super Slots, the company’s new iOS release, a bit of a departure. But with some interesting gameplay twists, it could be TinyCo’s biggest game yet. And yes, I owe you an apology for that pun.

At first glance, Super Slots looks like just about any other free mobile slots game that’s out there at the current time. It features five-reel machines with options to vary the number of coins wagered and the number of lines bet. Every coin wagered earns you an experience point, enough of which advance you to the next level. Rewards for leveling include coins, cherries (the game’s “super” currency) and the potential to unlock new machines. A bonus timer counts down four-minute intervals for free coins, with the maximum bonus available after an hour.

So far, so familiar. Then you’ll notice that the game is giving you quests to complete – specific goals to accomplish that can give you quick bursts of XP in addition to bonus coins or cherries. It’s a feature commonly found in other kinds of mobile games but a pleasant surprise in a slots game.

You can also use Boosts to instantly multiply the amount of coins won on the next spin by anywhere from two to 10 times. If you’re a gambler, big wins give you the chance to play double or nothing by attempting to pick a safe containing a higher number than the one presented to you. Last but not least is the Super Wheel, where cherries can be wagered for a variety of prizes.

Super Slots needs these additions because the machines themselves aren’t terribly exciting. In fact, the four machines in the first zone, the Incan Jungle, are really just a single game with different rare symbols that show up on the reels. You won’t unlock a complete new theme (the Caribbean) until Level 19, which takes quite a lot of spins, even with the quests to level you up faster. 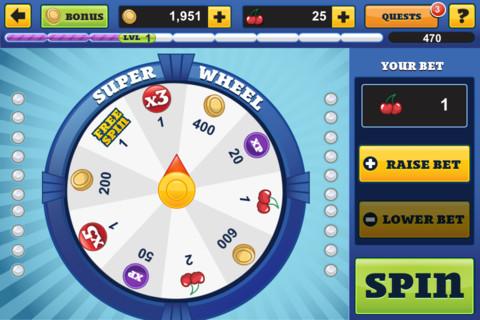 Helping mitigate any potential boredom is the fact that the game is visually impressive, particularly on the larger iPad screen. The symbols on the reels are big and bold, the buttons and meters are easy to read, and the layout fills the entire screen. The artwork is colorful and cute, not quite to the Zynga level but definitely in the same vein. Audio also helps drive the gameplay thanks to traditional reel-spinning sounds that manage not to grate on your nerves even during longer slots sessions.

If there was an IP attached, Super Slots would feel likeit had even more potential to be a bighit. There’s nothing wrong with the generic themes, they just lack that little bit of personality. Even more types of bonus games would help; the Incan Jungle has scattered bonus symbols that can grant free spins, nothing else. Competing games have raised expectations on the types of bonus rounds players expect.

Even with its weaker points, this is still a game that livens an increasingly crowded field up with some creative ideas. Super Slots might not come swooping in to fill you with thrills, but it’s definitely worth some consideration to add to your slots rotation.