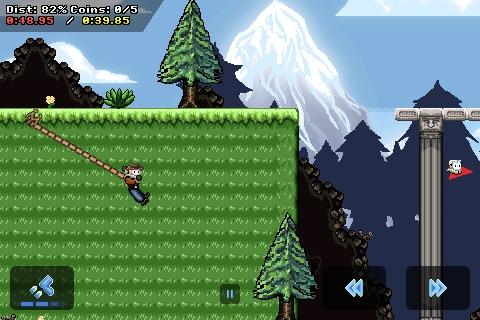 Hook Champ was, as any old school grappling hook fan will tell you, far and away one of the best iPhone games of 2009. It was polished, it was challenging, and it was fun. While the game has seen more than its fair share of new content, the developers at RocketCat Games have been hard at work on fully-fledged sequel that would take the game boldly into the 16-bit world. Now it’s here, and it’s every bit as good as we’d hoped.

The gameplay in Super QuickHook feels nearly identical to that in Hook Champ. For those of you not in the know, everything is centered around swinging to progress through a level. With a tap of your thumb your character will throw his grappling hook and swing across the screen. The objective here is to safely swing your way to the exit, finding ledges and cliffs to swing from along the way. If you’ve played the original, you’ll find that everything feels just as natural and satisfying as it did the last time around. If you haven’t, you’ll be in for a real treat when you find this out first hand.

The basics will be instantly familiar to series veterans, but not everything here is the same as in Hook Champ. While your character in Hook Champ could only travel by swinging, for example, now you can run when needed. Hook Champ also featured a demon that would chase you down, forcing you to rush through a level. There’s nothing like that here, as Super QuickHook gives players the opportunity to explore their surroundings a little more.

Once you’ve completed the basic levels, you’ll have the opportunity to unlock harder levels by meeting certain objectives. More often than not that means beating the developer score on a previous stage. Beating those scores can be tough, so you’ll find yourself playing earlier stages over and over again if you want to open up the later levels. You’ll earn in-game money with each level you beat, and these can be used to upgrade your abilities (as well as other content like new playable characters and hats), making it easier to reach a higher score than you might have before.

If you can’t manage to unlock everything, don’t worry – there’s still a fantastic new mode that we haven’t even touched on yet, and if anything, one might argue it’s the centerpiece of this entire release. Avalanche mode creates randomly generated levels in which you’ll try and outrun and avalanche. The levels here are endless, so the goal is to simply outrun your best score. It’s the perfect combination of Hook Champ and Canabalt, and considering how critically acclaimed both of those titles were last year, we’re inclined to consider this marriage a good thing. 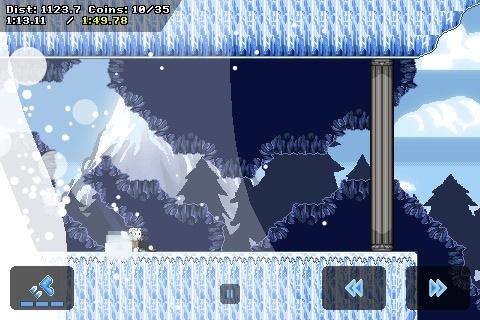 While the original Hook Champ was presented in an 8-bit style, Super QuickHook is presented in 16. The characters are taller and more detailed, the environments more lush and animated – and yet much of the same style is preserved. The hot magma levels here don’t “feel” like a brand new experience, they feel like a wonderful re-imagining of what’s come before. Rocketcat Games has managed to preserve a familiar experience despite a subtle shift in art direction.

What’s really magical here is that the 8 to 16 bit transition can be felt in more than just the visuals. Back in the early 90’s, when 8-bit games like Mario and Zelda were getting 16-bit sequels, developers managed to capture the essence of the earlier games while exploiting all of the new possibilities created by 16-bit hardware. The difference between Hook Champ and Super QuickHook is largely the same. The new one may be a bigger offering, and it may be a different offering, but it never loses the spirit and style that made Hook Champ so much fun.

With exquisite level design, tweaked gameplay, and a new endless mode, Super QuickHook is the sequel that Hook Champ fans have been waiting for. The game has a tremendous amount of replay value, and with the promise of new content via updates that value is only going to get bigger. Like its predecessor, this game is simply outstanding. Pick this one up now – we promise you’ll get “hooked.”