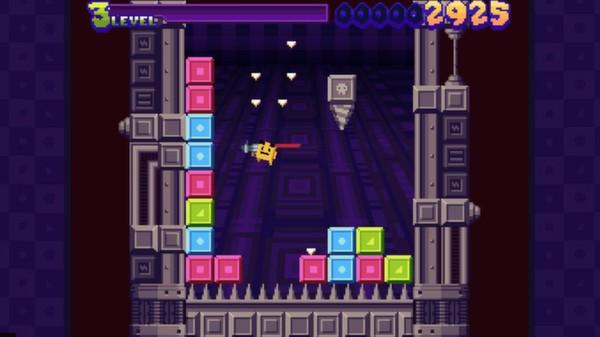 Sometimes you play a game so simple yet so effective that it leaves you wondering why no one has done it before. Meet Super Puzzle Platformer Deluxe, a sort of Tetris match-3 and platformer mash-up that gives as good as it gets. With twinges of Spelunky in there too, this fast-paced, quick-thinking blaster will kill you every few minutes, and yet you’ll keep coming back for more. The soundtrack is sublime, the controls are spot-on, and the challenge is very, very real. What I’m saying is, you’re going to love this game.

The concept is quick and easy to get to grips with. You’re a small, square, yellow guy trapped in a Tetris-like chamber. As blocks fall from the ceiling, you need to shoot them so as not to let the chamber fill up to the top – if this happens, it’s all over. Note that this will rarely happen, if ever, since you have plenty of other far more dangerous elements to worry about. First, there’s spikes on the floor that’ll catch you out if you’re too quick to destroy the blocks surrounding you. There’s also traps that will fall from the ceiling, such as spikes, cannons, balls on chains and lasers, and the only way to get rid of these is to destroy an adjacent block.

Oh, and bricks can also fall on your head and kill you. You know, just in case there weren’t enough ways to die.

Breaking up the party works in a color-connected method. If a bunch of yellow bricks are all sitting next to each other, shooting one of the yellow bricks will eventually break them all. The more bricks in a combo, the longer it will take to destroy them, but also the greater the score you’ll achieve. There’s also a levelling system involved. As you break bricks and traps, gems will fall out all over the place. Collect enough gems and you’ll level up, granting you more powerful weapons. If a brick hits you on the head you’ll go down a level – unless you’re only level one, in which case your future won’t be so rosy.

What this all amounts to is an experience which will no doubt kill you within 30 seconds the first time you play it. On your second go, you might last a minute. By your umpteenth go, you’ll be lucky to last more than three or four minutes. Super Puzzle Platformer Deluxe wants to kill you, and you’ll go down screaming every time. But you’ll be screaming in a good way. See, this is one of those games where you’ll actually enjoy dying. Super Puzzle Platformer Deluxe is just so gorgeously designed that it’s impossible not to enjoy the absolute beating that it’s giving you.

If you’ve played randomized dungeon crawler Spelunky before, you’ll know exactly what I’m talking about. As you play Super Puzzle Platformer Deluxe, you’ll slowly but surely come to learn exactly how each element works. Your skill at dodging and predicting angles of death will evolve. Your yearning to have just one more go will become even more desperate. Suddenly you’re climbing the scoreboards, and you realize that you’ve actually found the knack for it. You’ll begin to experiment with the various characters and their individual skills, and you’ll find yourself shouting “Hell yes” as you pull off the most insane getaway hours into play.

There’s just so much depth here, despite the simplistic concept, that I’m fairly certain I could play a game or two of Super Puzzle Platformer Deluxe every evening for the rest of my life, and I would never become bored of it. That’s without even mentioning the stunning chiptune soundtrack that you’ll be singing along with, and the local split-screen two-player mode, in which you battle against each other to see who dies first. Warning: games in this mode last even less time than the single-player, and are just as fantastic. 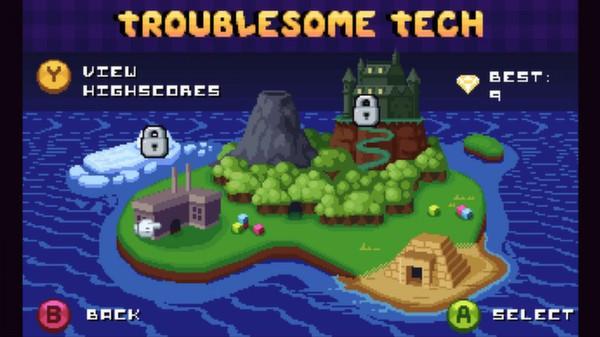 Super Puzzle Platformer Deluxe also comes with a set of 18 challenges to beat, each of which takes an element or trap from the main game and asks you to survive an onslaught for 30-45 seconds. I didn’t hit it off as well with this mode, as many of the challenges revolve around memorizing patterns and pulling off pinpoint perfect moves. Still, they’re worth checking out for you masochists out there.

It’s worth noting that while Super Puzzle Platformer Deluxe‘s difficulty is its main selling, some elements take it a little too far and feel downright unfair. A number of times a perfect run was cut short when a completely unavoidable trap dropped from the ceiling and landed in such a way that there was no escape. Other times I found that certain blocks fell from the ceiling such that I would never be able to survive in the given scenario. These instances are uncommon, but still feel rather frustrating.

So should you buy Super Puzzle Platformer Deluxe? I’ll answer that with a question of my own: why haven’t you bought it already?