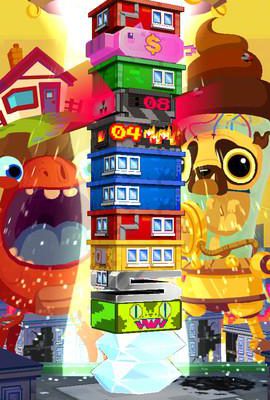 Super Monsters Ate My Condo is the follow-up to Adult Swim Games’s slightly less super Monsters Ate My Condo from 2011. At a glance, the two games are nearly identical: both throw you into a frenetic twist on the match-3 genre, in which you need to connect same-colored condos in a constantly growing high-rise tower, mid-monster attack.  Beyond these similarities, players are treated to a smorgasbord of new and delicious content.

To make matches, you swipe out unwanted condos to the left or right, where ravenous monsters are waiting to gobble them up.  Each of the four monsters has a corresponding color and prefers to eat condos that match it; if you feed one too many of the wrong color, he will get angry and shake your precariously tilting tower.  Feeding the right color will keep him happy, and serving upgraded (previously matched) condos to a monster will activate his special power, which will assist you in making even better upgrades and scores.

Although the gameplay, presentation, and characters (you will be threatened/assisted by the same four monsters in each) are repeated across both titles, there are significant changes in SMAMC.  A slew of new condo types will now rain down upon your tower in addition to the original’s blue, yellow, red, green—which turn into bronze, then silver, gold, and diamond upgrades when matched—and concrete and bombs.  Two new dangerous condos have been added, acid and nukes, which like bombs, have countdowns and negative effects if not matched before their time runs out.  Acid will eat through whatever condo is directly below it, and nukes will end the game immediately once they go off (unlike bombs, which shake your tower, but can be survived).  As with the other “bad” condos, matching around or next to these will defuse them, and matching three “bad” condos together will create a combo-strengthening cat. 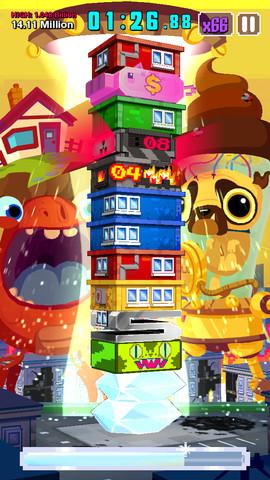 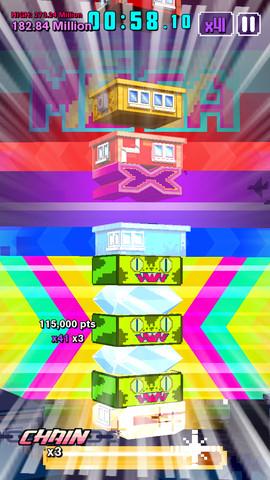 Four new beneficial condos have also been added, which are earned by making large matches.  Clocks appear when you match 3+ condos, and will add an extra second to your round timer for every condo they are matched with.  Piggy banks require a 5+ condo grouping, and award you coins once matched.  The multiplier condo, a giant pink “X,” appears when you match three “good” condos and quickly increases your score multiplier.  Finally, the rarest of all—the dog condo—activates both current monsters’ powers simultaneously when fed to either of them.  The dog is only usable by purchasing it with coins before a game, and you’ll receive just one for the entire round.

The dog, and other upgrades, can be bought from the “boost shop,” another big addition to SMAMC.  Boosts are an optional way to spend coins you’ve earned from piggy banks or other bonuses, but they have a significant impact when used.  Their benefits vary:  some activate certain monsters’ abilities automatically for the first 20 seconds of the game, while others increase your score multiplier, add time to the clock, or prevent “bad” condos from going off (“Peace Time”).  Their prices range from the cheapest (10x points for 20 seconds) at 200 coins, to the most expensive (dog) at 3,000.  Considering an average round will net you between 75 to 200 coins, boosts are a valuable, but expensive, bonus.

You can, of course, buy extra coins with real cash via the newly added store, but this never feels necessary or forced.  Besides starting you with a generous 10,000 big ones, you can also earn up to 5,000 extra coins from the mini-wheel bonus at the end of each game (assuming you made it to the end without your tower falling over).  The wheel offers other prizes, like one free boost or nothing at all, so receiving coins is not guaranteed, but I have yet to feel shortchanged. 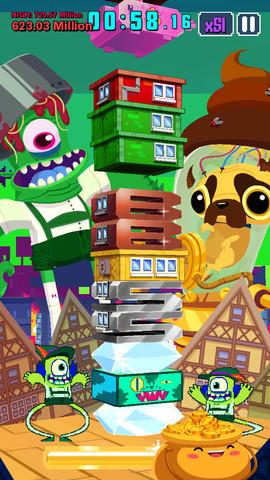 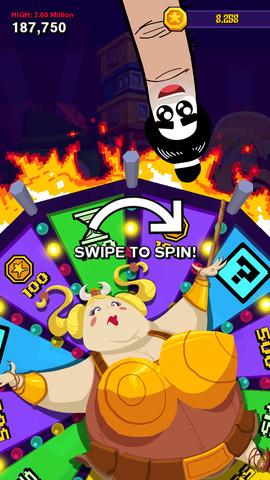 Even before all these additions, MAMC was a fairly complex match-3 game, and SMAMC acknowledges this with a much-needed “How to Play” section and progressive learning curve.  SMAMC introduces a leveling system which will ease both beginner and expert players into its classic gameplay and new features.  “Bad” blocks don’t begin appearing until you’ve reached level four, with new condos appearing each level until the last one (acid) at twelve.  To level up, you have to complete in-game achievements like reaching a certain score, or easier “tutorial” type assignments, like “Use each boost at least once.”  This is not only an excellent way to learn the game, but also a strong incentive to keep playing—especially for those of us who need something more than simply “beat your last high score.”

Jam-packing SMAMC with all these new features did result in one casualty: the Endless Mode of MAMC is no longer available, and the 2-minute Time Attack has become the primary game mode.  Slightly making up for this are the new random “Events” which may show up every five games, allowing you to pay a chunk of coins for a drastically different experience.  These are expensive, though (10,000 coins), and rare, ultimately making them little more than a novelty.

Unless you play MAMC strictly for Endless Mode, Super Monsters Ate My Condo is absolutely the superior game and what the original should have been, even if we didn’t realize it at the time.  It retains all of the ridiculous charm and ingenuity from its predecessor, sandwiched between more, more, more: more content, more hooks, and more fun.  That’s a combo any monster would salivate over.