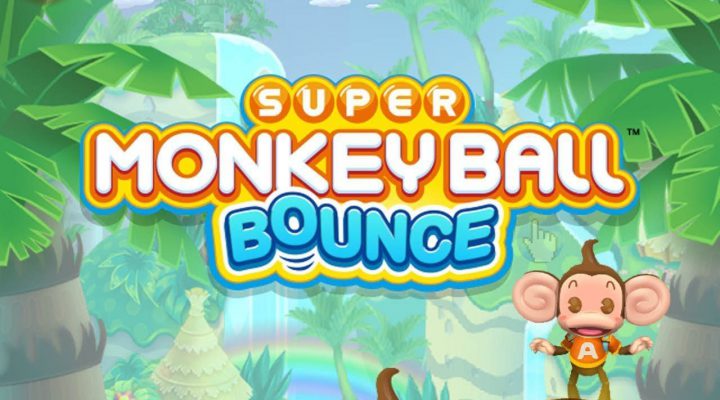 Easy for anyone to pick up and play

Roadblocks, and Advertisements, and Lockouts oh my!

Does not expand enough from Peggle, borderline clone.

Some would say I still have not played a Super Monkey Ball game, because Bounce is basically Peggle decorated with AiAi and his monkey buddies. It’s nothing like the GameCube original which had players precariously rolling across floating levels as a monkey in a clear ball.

From what I can tell of the console original and its dozen-or-so spinoffs, these games are famously adorable. We’re talking Animal Crossing levels of adorable here. Dangerous levels of cute. Super Monkey Ball Bounce was no exception and featured the iconic little monkey people squealing in glee while I made my way through the game. 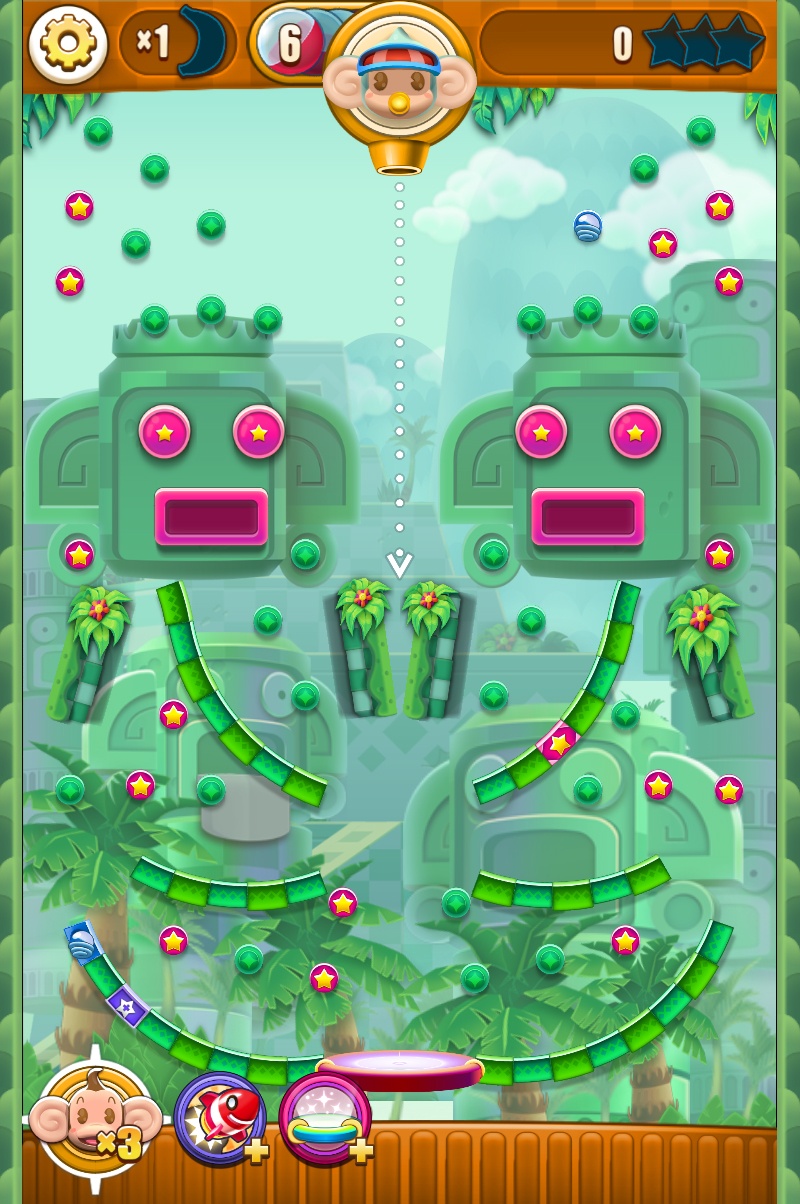 As I mentioned before, Super Monkey Ball Bounce is basically Peggle. You launch a ball from the top of a vertical playing field and watch as it bounces down throughout the pegs studded throughout the level. The ball eventually falls off the bottom of the field, essentially ending that turn. You have a certain amount of balls for each level to clear out a certain amount of objective pegs. If you run of out balls, it’s game over and you can try again. If you run out of try-agains, you can either pay up or get back to being productive and pick Bounce back up once the try-agains are refueled. 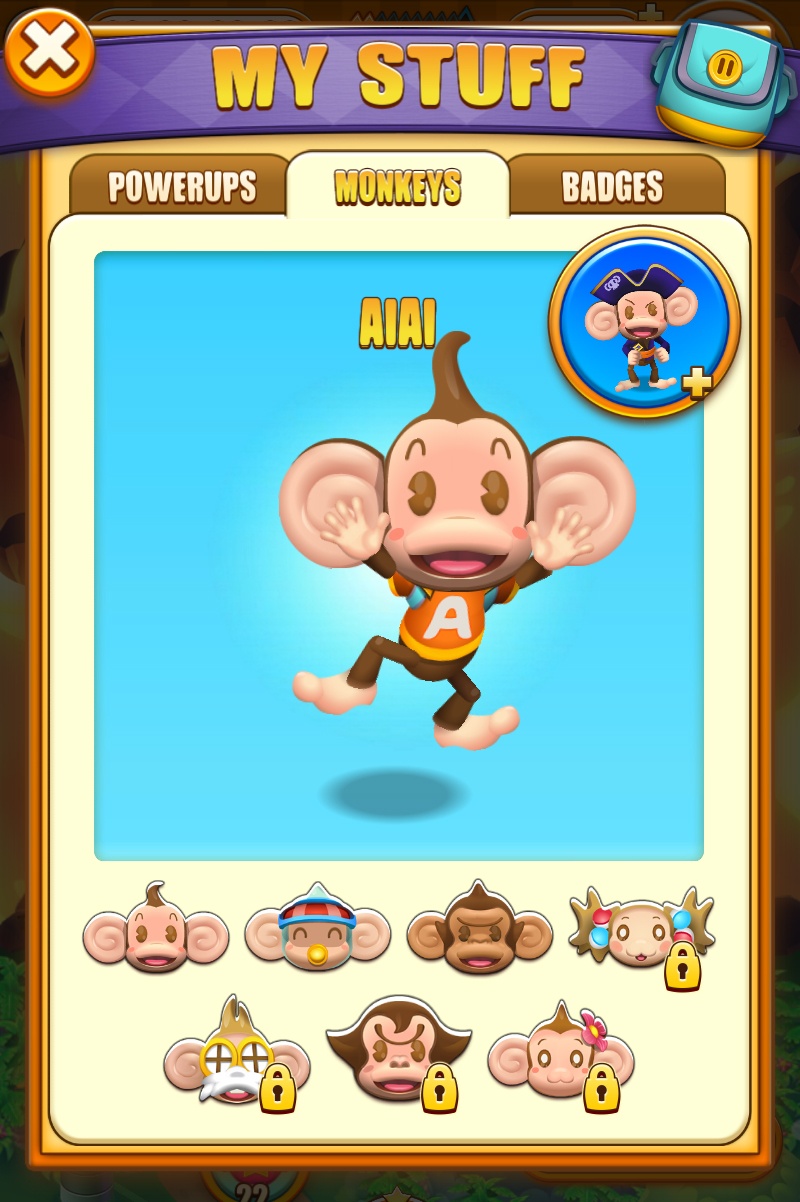 As you progress through the game you rescue more of AiAi’s friends. These monkey buddies come with their own special monkey abilities that can alter the mechanics a little bit. For example, one monkey I rescued allowed me to launch balls that just demolished through any peg it came into contact with. Another monkey ability allowed me to see approximately where the launched ball would bounce to and from for a short distance, making planning my shots a bit easier.

Everything was going smoothly, and then I hit a roadblock. Literally.

“Pay us gold or invite your friends to play, or you’re stuck here for the next three days,” I was informed. 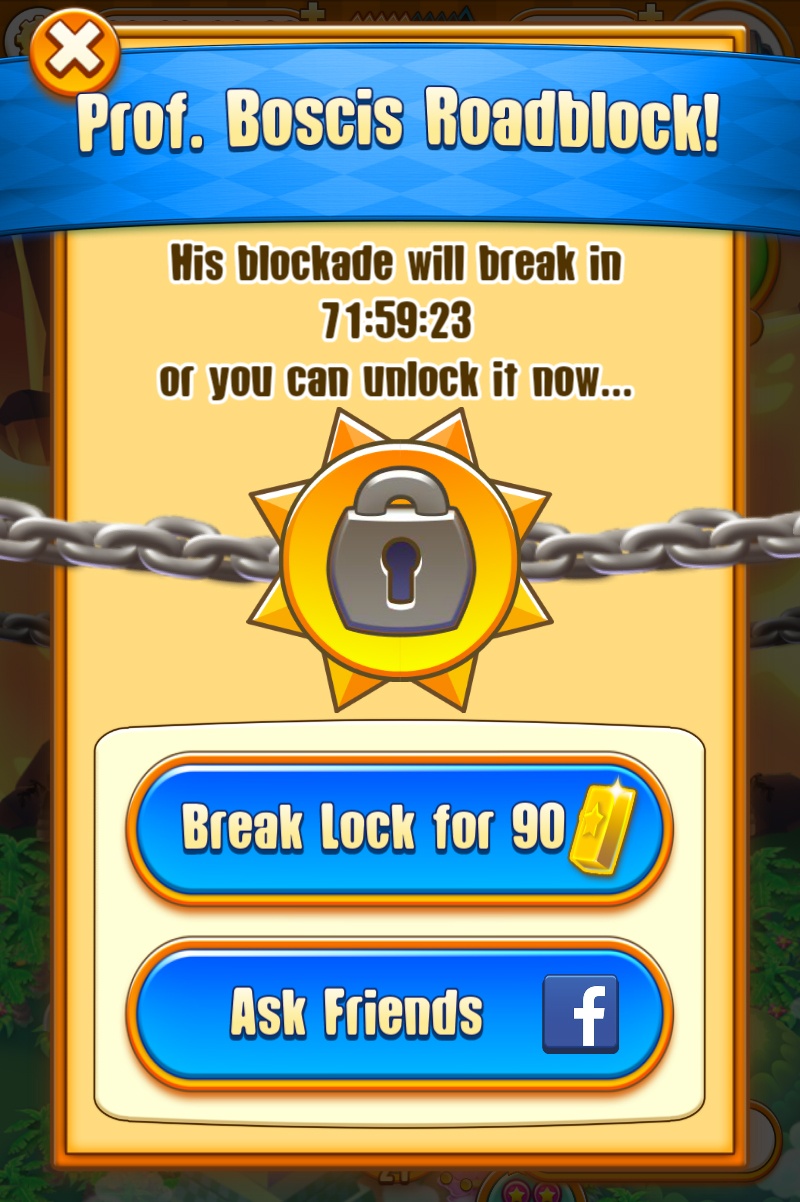 This was rather jarring. Seventy-two hours is far beyond anything I’d ever been asked to wait for any other mobile game I’ve played. Bear in mind, I wasn’t simply waiting for one aspect of my game to progress (e.g. growing crops that take awhile to grow); I was literally locked out of progressing further.

This is where I kind of messed up. You see, you start Super Monkey Ball Bounce with a good chunk of gold to your name. At a few points before the first roadblock (which pops up at level 23) I encountered a slot machine that allowed me to roll for the chance of bonus items and cosmetic upgrades for my monkey crew.

I literally spent all my gold doing this.

I figured, might as well try and get the extra items, since I didn’t plan on spending the gold on anything else.

Whoops. Turns out the game forgets to tell you, “Hey, all this gold you’re spending…you’re going to need it if you want to keep playing.” All the ads that kept popping up gave me the impression that I would just cruise through the game having to stop and watch ads to compensate for the game being free to play. Which was fine with me, that would have been totally normal.

It’s a little shady that Super Monkey Ball Bounce doesn’t give a heads up about the gold thing, but that’s what I get for blowing my gold like a kid infront of a Monkey-run gambling machine.

Super Monkey Ball Bounce is a decent game. It runs well, it features a colorful cast of monkeys and an even more colorful assortment of levels that come to life like a pinball machine with each bounce and bump of the launched ball. Bounce doesn’t deviate too much from Peggle, but considering Peggle isn’t even available in the Google Play store, I suppose that was a void that was just begging to be filled.