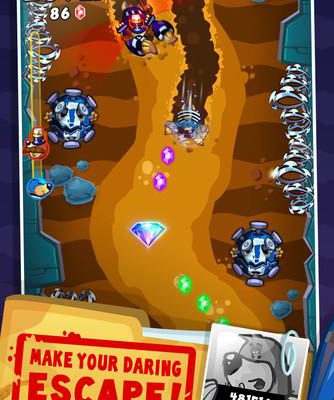 If mole prison were real, our yards would be in much better shape

Super Mole Escape is a great game if you hate productivity. Wait, let’s start over. Ahem. If you’re a fan of saying “just one more time” every few minutes, then I’ve got the perfect game for you! That’ll do.

Published by [adult swim] and developed by Grumpyface Studios, Super Mole Escape tells the story of an imprisoned mole trying to dig his way out of jail. While it doesn’t say so anywhere in the game, I’m guessing he went to jail for digging up someone’s yard. Regardless, his escape plays out much like an endless runner, with the player tilting their device left and right to stay on the right track and avoid obstacles. And oh, how many obstacles there are.

The correct route in the game is noted by the lightly-colored dirt. If you stray off it, your mole will start to slow down a bit. This is important, because there’s a prison robot in constant pursuit of you. If that’s not enough to make the situation stressful, there are also hindrances such as Tremor-like worms, mines, and rock masses to watch out for. It’s no easy feat, and the absurd speed at which the mole travels doesn’t exactly help. 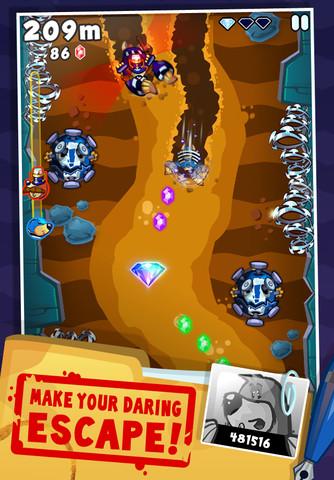 Fortunately, the path is also lined with gems that have the potential to speed you up for a brief period. This is when the game is at its most exciting, as you’re forced to think on your toes (paws?) as your mole haphazardly races downward as fast as possible.

Gems can also be used to purchase character upgrades, single-use power-ups, and additional characters. Fully upgrading a character’s stats (speed, acceleration, strength) costs quite a few gems, as does purchasing some of the more powerful characters. While it’s certainly possible to earn enough just by playing, you can also purchase some for cheap via in-app store. I mean, if that’s your thing.

While much of the game takes place in regular dirt, you’ll also encounter layers rife with ice, lava, and more. Each of these possess obstacles all their own, and having a good run depends on your ability to adapt to all of them. It keeps the game exciting, and adds a nice extra level of strategy to it. 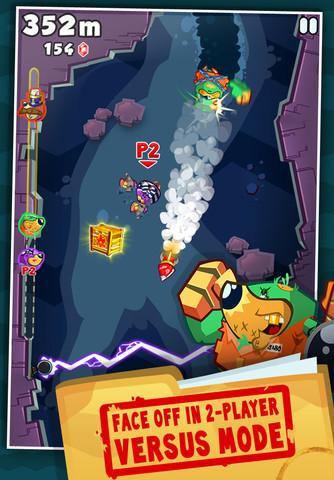 The game also features a versus mode where you and another player can compete to see who can avoid the mole-police and travel the furthest distance. I never encountered lag when I played, and not once did it take longer than 10-20 seconds to locate an opponent. I got smoked just about every time I played, but I had a lot of fun in the process!

It’s hard to find fault with Super Mole Escape. Its tilt controls are some of the best I’ve seen in an endless runner (there are also touch controls, but I found myself preferring tilt), the graphics are as vibrant and charming as we’ve grown to expect from an [adult swim]-published game, and the inclusion of achievements and sundry unlockables makes the game dangerously addictive. In the off chance you’re the type of person who takes issue with assisting a mole in a prison break, you’re missing out on a whole lot of fun.