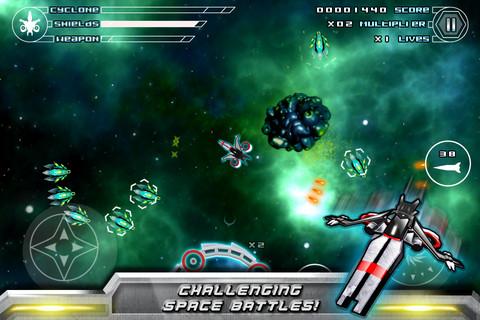 Shooters are in no short supply on iOS, but considering the limitations of the platform, the good ones are few and far between. Miniclip adds its twist on the genre with Super Cyclone, a shoot’em-up set in space that’s down to earth enough for any type of gamer.

Super Cyclone is a twin-stick shooter in the vein of Infinity Field or Super Stardust HD. You’ll control your space ship with two virtual analog sticks – one for directing your ship and the other for firing. There are several default weapons to choose from, as well as additional firepower you can purchase with points earned through play. Space Cyclone is certainly no RPG, but the formula for progression is fun and well balanced.

Unlike Infinity Field, the enemies in Super Cyclone don’t simply move in random patterns around the screen. The artificial intelligence is constantly on you like glue, and you’ll have to prevent nests of enemies from entering your space sector, lest you see the “game over” screen. Rather than having a health bar, your ship has shields that regenerate after a short time.

Perhaps the key feature of Super Cyclone is the cyclone ability, which allows you to spin your ship, defeating nearby enemies and collecting multiplier hearts in the process. By simply double-tapping on the right virtual stick, your ship will spin. Unfortunately it’s a bit too easy to trigger the ability, and since you’ll self-destruct should the cyclone gauge fill up completely, it’s an issue that can cause a few frustrating deaths. This same control sensitivity carries over to the left stick as well, and on occasion I found my ship stalled, though my thumb appeared to be pushing down on the stick.

Honestly, though, these are minor complaints, as the game otherwise handles splendidly for an iPhone shooter with virtual controls. The level of challenge ramps up steadily, and the variety of weapons are a whole lot of fun to tinker with. Since the game’s more-powerful weapons have a limited life, you’ll be forced to use your big guns wisely. 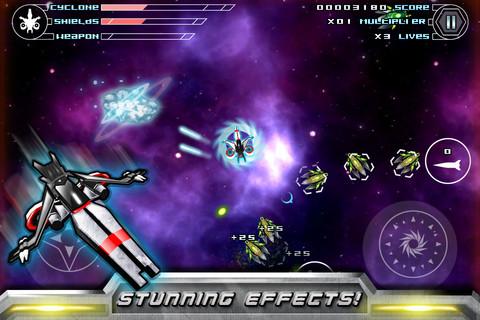 One thing Super Cyclone does especially well is make a great first impression. Though it lacks the crazy visual chaos of Infinity Field, Super Cyclone is still a fantastic-looking game. The lighting and particle effects are nothing short of impressive, and the 3D textures are attractive and detailed. The only real low point in terms of the game’s visuals is the lack of variety. There are four main areas to play through, with slight color changes as the only real distinction between each area. The music is a solid collection of techno loops, and the sound effects lend a heaviness to the gameplay that almost completely makes up for the game’s lack of tactile feedback.

Super Cyclone is by no means an epic adventure, but for a buck it’s an excellent arcade-style shooter. It’s difficult to imagine that so much value is now available to mobile gamers, and the only thing holding Super Cyclone back from receiving a higher recommendation is the intense competition on the platform.