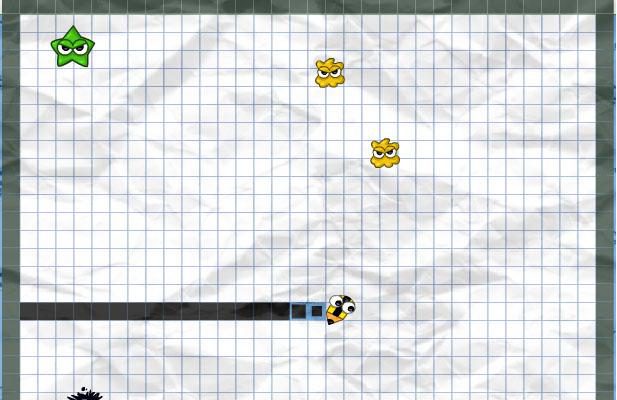 Super Crayon doesn’t feel much like a Facebook game when you initially play it. The action-puzzle gameplay and bright minimalist graphics feel more like the sort of thing that a mobile developer would come up with for iOS or Android. The goal of the game is not to score attack or do anything else you’d usually do in a Facebook action game, but instead an arcade-style attempt to try and survive for as many levels as you can. You even get three lives each time you start a new session and can earn more lives by getting particularly high scores.

As you might expect, Super Crayon is about drawing lines. It’s mostly a single-player game, since the tournament mode costs real money if you want to play it. It actually feels a bit like a maze game, since you need to make sure you avoid monsters roaming around the field while drawing your lines. If a monster touches you or a line you’re drawing, you’ll die. You begin on the outside of the field in a one-tile-wide safe zone and can slowly “color in” the white grid-marked field by drawing boxes. You can use the safe zone as part of your boxes and the goal is to slowly work your way inward, until you’ve boxed in at least 80 percent of the field. If you box in an area with a monster inside it, it won’t fill in. 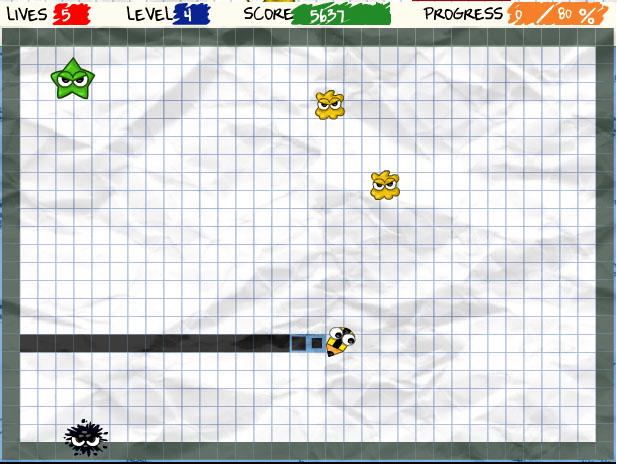 As you try to draw boxes and dodge monsters, power-ups appear on the field. You can get power-ups that slow monsters, freeze monsters, increase your speed, or briefly give you the power to “eat” them a la Pac-Man. In another nod to Pac-Man, fruits worth bonus points also appear randomly on the field. Stocking up on power-ups is the key to getting lots of points and extra lives in Super Crayon, but monsters will eat power-ups if they touch them. Every monster type has its own movement pattern, some roaming inside your boxed-off areas while others bounce around in the white field you’re supposed to be boxing off.

The basic gameplay of Super Crayon is solid, but the game has some implementation issues. Enemy AI and physics both seem a bit glitchy. Larger enemies meant to bounce around white areas can sometimes “bounce out” into the colored portion of the field if they bounce around in a sufficiently narrow area. One enemy that looks like a scribble and is supposed to ominously circle the safe area and colored parts of the field sometimes bugs out when traveling through narrow areas, causing it to jump rapidly from one side of the colored areas to another. Perhaps most irritating is that the ghost enemies that spawn inside colored boxes can spawn right next to areas where you respawn. You have no immunity after a death, so if a monster barrels into you before you can move, well, too bad. 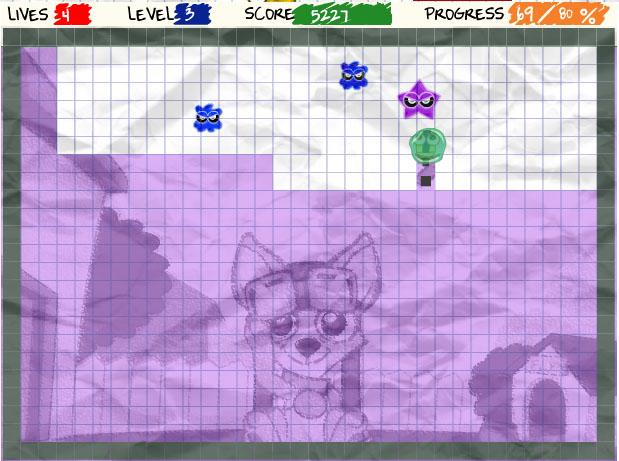 Dodgy gameplay aside, Super Crayon also suffers from the integration of some extremely aggressive and dodgy ads for Social Point’s other games. The ads are formatted to look like Facebook notices that are part of Super Crayon, but clicking on them takes you to a different game entirely. You can simply close these ads, but they pop up very frequently and intrusively while playing the game. As it is Super Crayon is difficult to enjoy, since the glitchy enemies make your deaths cheaper and cheaper as you get into higher levels. The intrusive ads make the game simply not worth playing for long.