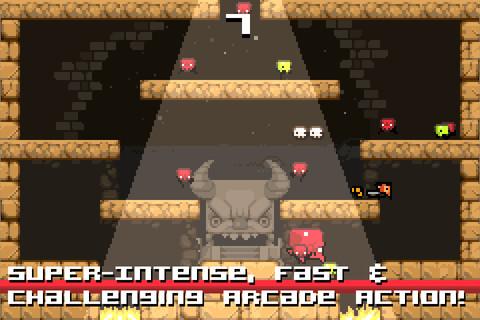 Originally released as a free download for desktop gamers back in 2010, Super Crate Box was a brilliant mash-up of old school one-screen platformers and frantic modern indie design. Now more than a year later the game has come to iOS – but is it as good in your pocket as it is on your PC?

Before we answer that, it’s probably best to explain what exactly Super Crate Box is. Think Mario Bros – not Super Mario Bros, but the original one-screen game in which players would walk around in a sewer dealing with an endless assortment of bad guys. Now add in the weapon selection of Contra. Now refuse to take your ADHD medication. That, in a nutshell, is Super Crate Box.

Players take control of a tiny hamster – at least we think it’s a hamster – who just loves to find weapons in crates. You’ll move from crate to crate, switching weapons and earning points with every crate you touch. The only real object of the game is to survive as long as you can. Open a certain number of crates and you’ll unlock new stages, weapons, and characters – but in terms of specific goals, Super Crate Box is about little more than endurance.

Survival is more easily said than done, as each stage is teeming with walking skulls that will kill your hamster the moment they come in contact with him. I suppose that this is why he’s so eager to find fresh weapons all the time.

The game offers a great assortment of weapons that all feel unique. Players will snag grenade launchers, katanas, mines, and more. The trade off though, is that you’ll never know which weapon you’re getting next until you open the crate. Sometimes you’ll be trading a great weapon for a crummy one, but since you have to open the crates to advance your score anyways, this just gives you more reason to try to reach the next crate as quickly as you can.

There are ways to avoid the skulls, but this has its downside as well. When the skulls reach the pit of flames at the bottom of the screen, they don’t die – instead, they get angry. Once angry, they re-enter from the top of the screen and move at a much swifter pace. Still, it’s nothing a few well timed shots with your laser rifle can’t take care of.

Super Crate Box is really fun, but it’s also really really hard. Play sessions don’t usually last much more than a minute, and while a good player might find it easy to rack up their score, my experience never left me much higher than 15 points. There’s plenty of fun to be had in the challenge, but if you’re the sort of gamer that’s easily frustrated, there’s a pretty good chance that Super Crate Box might not be for you. 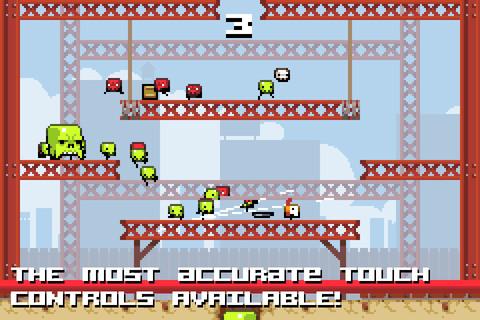 The game’s difficulty is compounded by the fact that the touch screen controls on the iOS version can feel somewhat flaky at times. While it didn’t happen constantly, I suffered more than a few deaths because the game moved me left when I intended right, or fired when I meant to jump. On-screen buttons can be a real hit or miss proposition on touch screen devices, and with Super Crate Box, the verdict lies largely in the middle. Here’s to hoping that there’s an update sometime in the future that lets players adjust the size and placement of these buttons.

Elegant in its simplicity yet challenging in its execution, Super Crate Box is a game that should easily satisfy fans of classic gaming. While the controls aren’t perfect, they’re reliable most of the time, making it easy to overlook such hiccups. The mobile version of Super Crate Box offers up all of the fun and freneticism of the original, making it a perfect choice for old school gamers on the go.