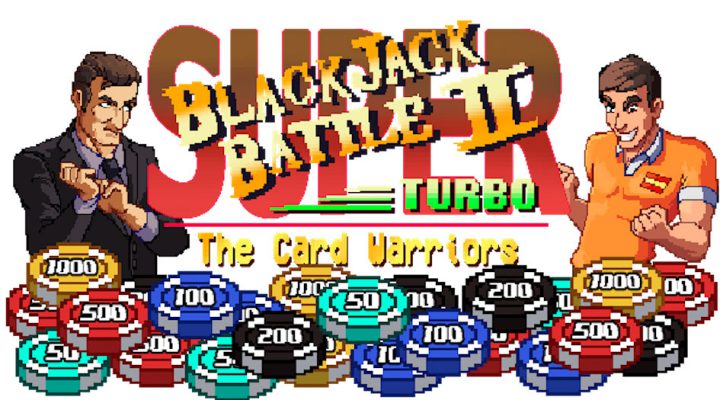 Great mash up of genres

AI is a bit easy to beat

Can be hard to find online competition

To the more casual player, Super Blackjack Battle II Turbo Edition might sound bafflingly complex for a simple Blackjack game. For anyone who spent time with a Super Nintendo, well, you’re going to know what to expect here. Taking its cue from Street Fighter II (and its many incarnations of the Turbo and Super variety), Super Blackjack Battle II Turbo Edition is a Blackjack game with a fundamental difference to most – it has a story mode.

It works quite well too with a distinctly tongue in cheek approach. While longevity might be a little limited, away from online modes, Super Blackjack Battle II Turbo Edition remains a rather delightful mash up. 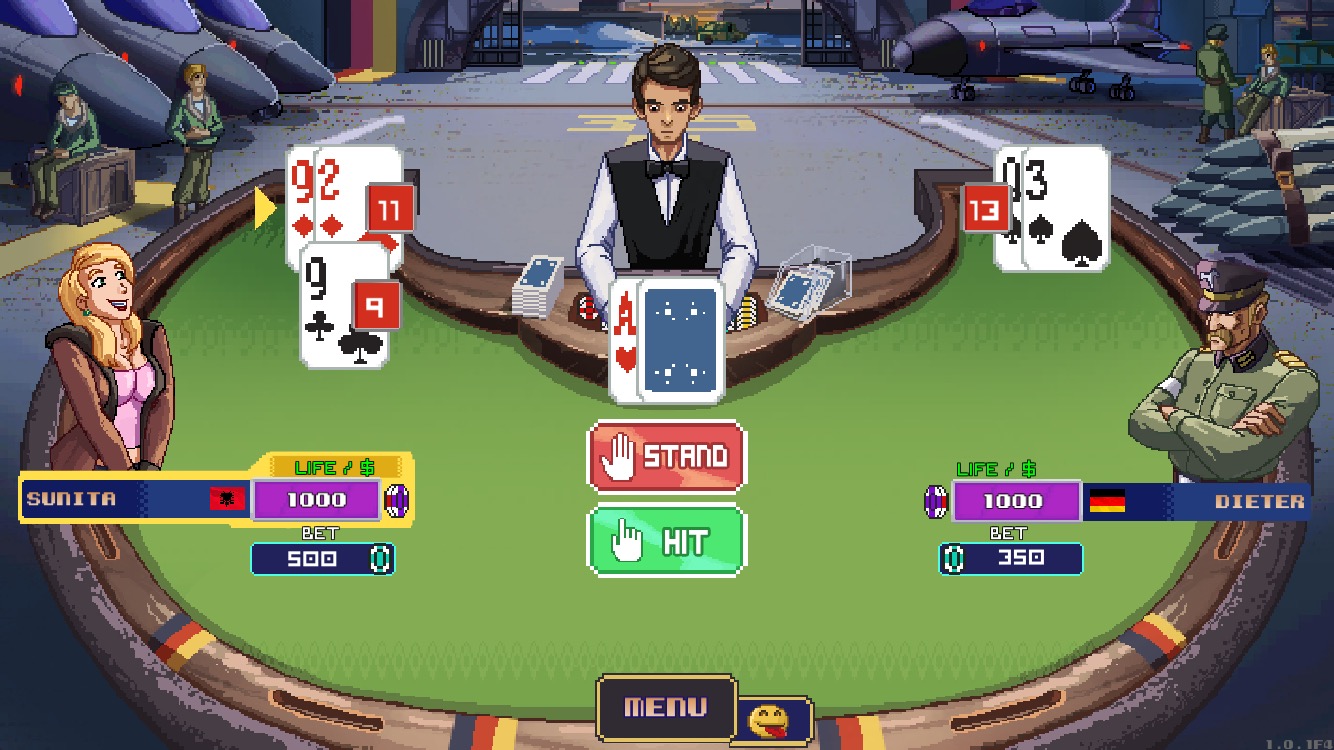 The story behind Super Blackjack Battle II Turbo Edition focuses on a mysterious casino in Las Vegas. Run by the Godfather of the most influential crime family, players take a character down a path of gambling. Each of the 12 characters have very different reasons as to why they want to be the best player out there, but the crux of the matter remains the same – beat the dealer in a more efficient way than your opponent.

Each match is made up of 10 rounds. In that round, you and your opponent are dished out cards by the dealer, and you’re left to decide how to proceed. Stand, hit, double, and split all come up at relevant times. Super Blackjack Battle II Turbo Edition doesn’t offer a tutorial but it’s a fairly simple concept. You want to get to 21 without going over. Rather than working at beating your opponent, you actually need to concentrate on beating the dealer. 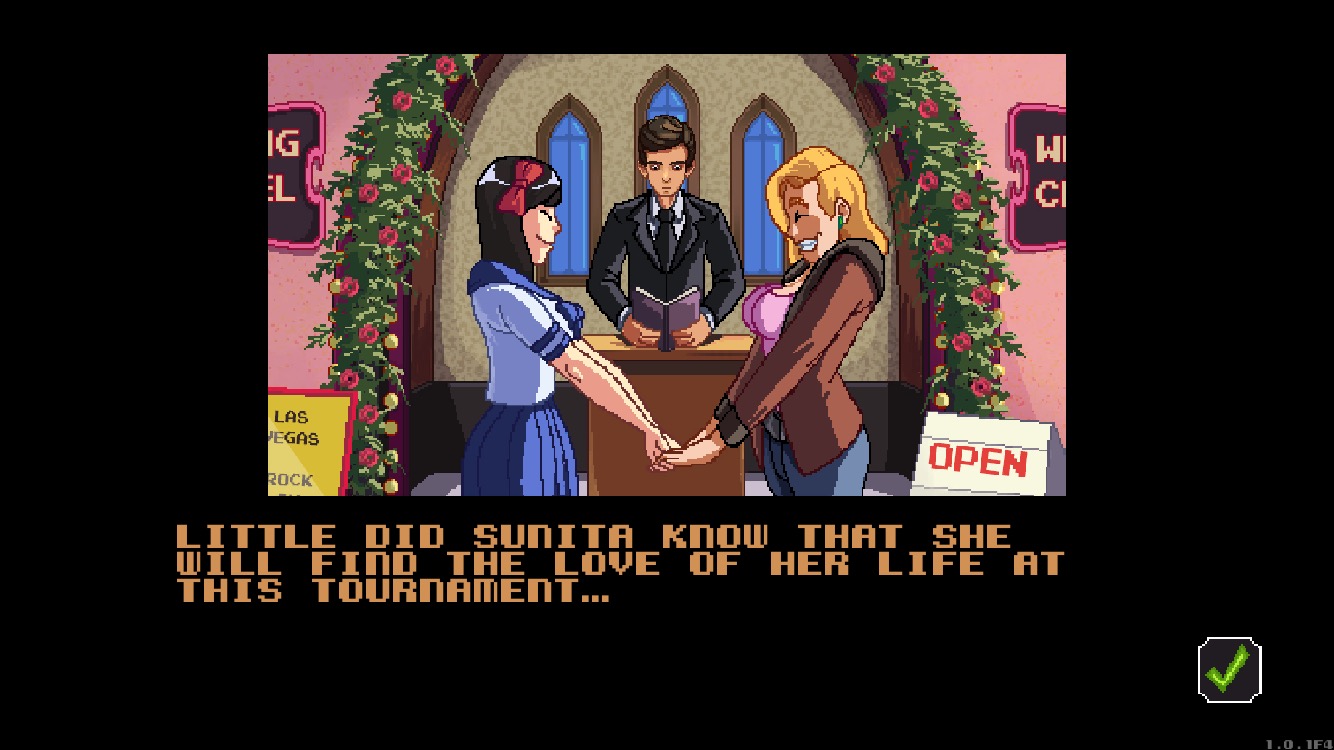 To defeat your opponent, you simply need to earn more money than them in the 10 rounds or force them to go bankrupt. It’s a simple enough concept but reasonably enjoyable too. You can tweak how much you want to bet each round and work from there. There’s a reasonable amount of strategy with a mixture of low and high bets generally paying off the best.

Lose a match, and you can opt to restart where you left off – much like how a defeat in a Street Fighter game plays out – so it’s not exactly difficult to ‘finish’ the game with your chosen character. It’s fun seeing what the player was trying to achieve, which means you’ll be keen to play through as each of the 12 characters on the roster.

Other Street Fighter style twists include how each round starts with an enthusiastic yell of ‘Fight!’ along with some typically old school fighting game music. It all adds to the charm and is quite appealing. 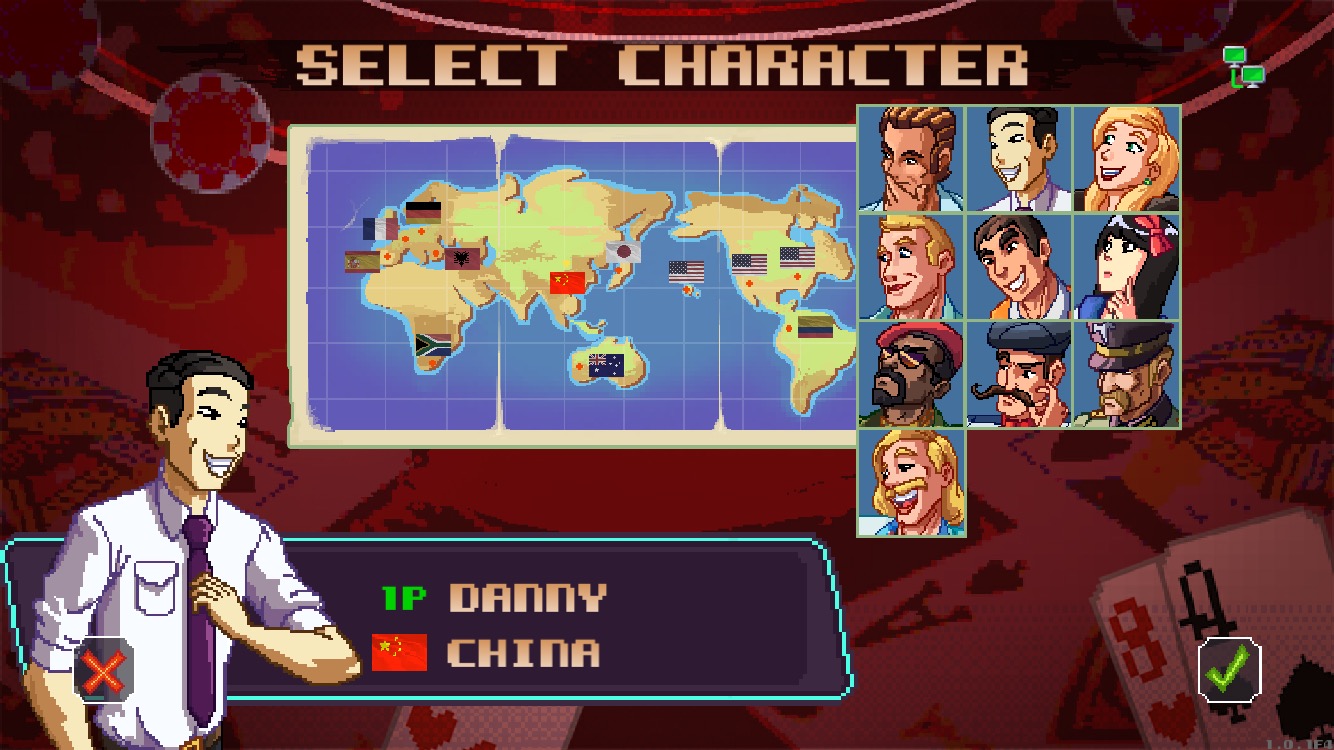 Elsewhere, you can opt to play online against up to four players. Super Blackjack Battle II Turbo Edition incorporates cross platform multiplayer meaning you can play against Windows gamers, as well as other mobile players. It’s fun, but bear in mind that Super Blackjack Battle II Turbo Edition is most fun when it’s offering some tongue in cheek storytelling. There’s also always the issue of finding other players, but a warm up mode will keep you busy while you wait.

So, your time will be mostly spent playing the tournament mode, but it’ll be mostly worth it. Your AI opponents are a touch easy to beat, mostly because you can work on simply avoiding losing rather than winning by any substantial margin, but you’ll forgive it. After all, this is a fairly fun take on a familiar gambling genre.