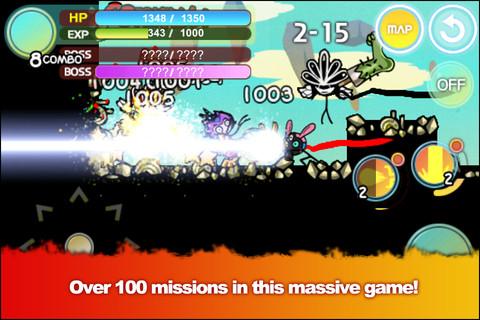 A heroic attempt, but villainous execution

Who didn’t want to be a super hero growing up? Heck, who doesn’t want to be a super hero how? It’s a pretty sweet gig: you hang out around the city until something worthy of your attention happens, stop criminals while exerting minimal effort, then soak up praise until someone else is foolish enough to attempt to present a challenge to you. That doesn’t even begin to touch on all the super hero groupies that come with the role. Super Action Hero, Com2Us’s latest offering to the App Store, lets you dawn the cape and mask of a heroic stickman and fight crime.

So, is Super Action Hero as good as a hero’s morals or is it a robber in disguise looking to steal your money and time?

Here’s what you need to know about the story and gameplay of Super Action Hero: There are bad guys. You are a good guy. Stop them. It’s about as close to a button masher as one can get on an iOS device. They may be virtual buttons, but I promise you’ll be pressing your fingers against them at lightning speed to land as many hits as possible. It’s easy to pick up, but there are moments where it doesn’t feel quite as responsive as it should be.

The game has a combo system built in that is simplistic and does a lot with how few options it has. Because the game only has a directional pad and a single, big button for all actions, most combos are strings of moves. You’ll definitely get your fair share of impressive combos, but much of the time you’ll do so without realizing it in a tapping haze. It’s nice that it’s there, but the game doesn’t totally lend itself to implementing the system effectively because of its pace.

The baddies you’ll encounter in the game are really the least of your worries. Most are fairly weak and have poor AI, so they’re simple to vanquish. The world around you causes slightly more issues. As you progress, the environments begin to present a challenge to your well-being. Sometimes it’s on purpose, with quick platforming action while escaping explosions, and sometimes its not, like getting stuck on a part of the world that seems unavoidable. As the environments change so does the gameplay, transforming almost completely into a platformer at moments. It keeps the game pretty fresh and, even given the occasional drawback or overshot platform because of the game’s speed, generally works.

Where Super Action Hero really thrives is with the customization. Or at least it would if it weren’t for some really weird issues that seemed to arise. The biggest promise of the title is the ability to create your own mask. It’s an awesome concept would be really rewarding to see it in action. Unfortunately I was never able to do so due to some sort of error. I ran into this issue on other occasions as well, while trying to equip certain gear and generally change my character in any way. You can’t fight off the bugs of the game, which is too bad because there appears to be a fair share of them. Assuming they get worked out, this game has the potential to have some of the best customization options in the mobile market. Honestly, wearing a mask that you’ve drawn has to be one of the most exciting ideas out there. 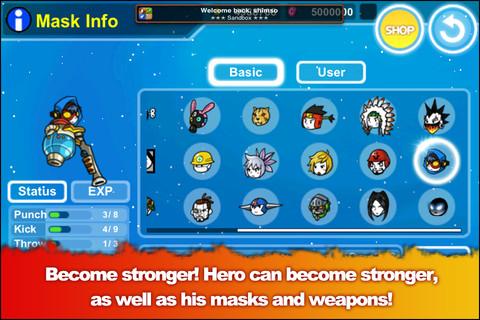 Super Action Hero looks and sounds good. The stick animations are plain, but the motion is extremely fluid. It looks like you’re watching the battle take place in the sketchbook of an art student. The cape motions really set it over the top, as the red stripe swings around with your character and accentuates your on-screen actions perfectly.

All in all, Super Action Hero is a good game with the potential for greatness, but with great power comes great responsibility. Super Action Hero definitely puts the power on display with some action-packed fights, a fun (though maybe impossible to master) combo system, and visuals that work well. Its power goes awry when it comes to its greatest promise, customization.

If Com2Us is responsible, they’ll patch this game up and get it back to fighting in the streets. Pending the fixes, this could be one of the better action games on the iOS platform. Until then, it’s held back by its technical flaws.